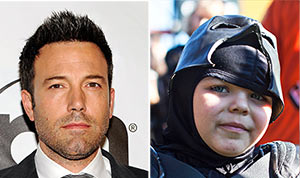 Celebrity News
Gotham Buddies! Ben Affleck Says Batkid Is "Best Batman Ever"
Ben Affleck -- who's set to play Batman in the Man of Steel sequel -- joined other celebrities via Twitter as he reacted to Miles, the 5-year-old Leukemia patient, who lived his dream as Batkid for a day in San Francisco

Celebrity News
PIC: Jake Gyllenhaal Steps Out With Bandaged Hand After On-Set Injury
Jake Gyllenhaal stepped out with a bandage on his hand to attend the 2013 Variety Screening of his film Prisoners in Hollywood on Friday, Nov. 15; the actor cut his hand on set of his new film Nightcrawler after punching a mirror two days earlier

Celebrity News
Alec Baldwin Apologizes For Alleged Gay Slur, MSNBC Show Suspended
Alec Baldwin's MSNBC talk show, Up Late With Alec Baldwin, has been suspended after the actor allegedly directed a gay slur at a paparazzo this week; "I did not intend to hurt or offend anyone with my choice of words," he apologized shortly after

Celebrity News
Batkid Saves the Day: Celebs React to Leukemia Patient's Make-A-Wish
Leukemia patient Miles, 5, had his dream fulfilled when he became Batkid for a day in San Francisco on Friday, Nov. 15 -- see how some celebrities reacted

Stylish
Simply Stunning! Jennifer Aniston Goes Without Makeup, Shows Off New Bob
Jennifer Aniston wore no makeup as she showed off her new bob haircut once again during a visit to Mila Moursi Skin Care Institute in West Hollywood on Friday, Nov. 15 -- see the picture

Celebrity Moms
Channing Tatum: Baby Everly Got Her First Tooth!
Channing Tatum revealed during an interview with Ellen DeGeneres on Friday, Nov. 15 that his baby Everly, 6 months, just got her first tooth