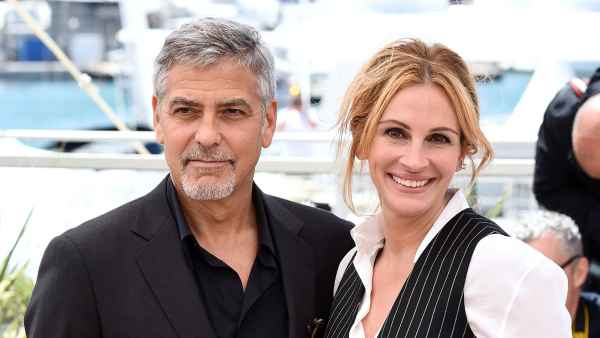 Movies
George Clooney and Julia Roberts Reunite in 'Ticket to Paradise:' Details
Together onscreen again! Julia Roberts and George Clooney costar in the upcoming romantic comedy Ticket to Paradise. In the film, Roberts and Clooney play a divorced couple who reunite to travel to Bali and stop their daughter (Kaitlyn Dever) from impulsively marrying a man she met on vacation. In a trailer for the movie, the […]

News
Larsa Pippen Spotted With Michael Jordan’s Son: What to Know About Marcus
On her team? Larsa Pippen was spotted out in Miami with Marcus Jordan — the son of Michael Jordan, who famously played on the Chicago Bulls alongside her ex-husband, Scottie Pippen, in the 1990s. The Real Housewives of Miami star, 48, grabbed lunch with the entrepreneur, 31, at a Japanese restaurant on Sunday, September 4, […]

Just Married!
How Jordana Brewster Honored Late Paul Walker at Wedding to Mason Morfit
Update 9/6/2022 3:28 p.m. ET: You don’t turn your back on family. Jordana Brewster honored her late Fast and Furious costar Paul Walker at her wedding to Mason Morfit. After the ceremony, the American Crime Story alum, 42, and her now-husband, 44, drove off in the blue ’90s Acura Integra GS-R that Brewster’s character was […]

Real Talk
Tom Brady Gets Honest About 'Ebbs and Flows' of Fatherhood After NFL Leave
Even pros need a break. Tom Brady raised eyebrows when he briefly stepped away from NFL preseason — but he’s attempted to offer sports fans some clarity since. Tampa Bay Buccaneers head coach Todd Bowles revealed during an August 11 press conference that the quarterback, 45, was “excused” from training. “He’s going to deal with […]

Babies
Big Brother’s Bayleigh Dayton, Chris ‘Swaggy C’ Williams Welcome 1st Child
Their rainbow baby! Big Brother’s Bayleigh Dayton has given birth to her first child with Chris “Swaggy C” Williams. The 29-year-old did not specifically reveal her little one’s date of birth, but she hinted at her new arrival in an Instagram Story clip on Monday, September 5. “Drop your questions below on anything [related to] […]

RHOP
RHOP's Candiace Dillard Accuses Karen Huger of Cheating on Her Husband
Called out! Real Housewives of Potomac’s Candiace Dillard-Bassett accused Karen Huger of stepping out on husband Ray Huger. “Karen was sneaking out of town with someone that wasn’t Ray,” Candiace, 35, told Ashley Darby in the trailer for season 7 of the Bravo series. Earlier in the clip, Karen, 59, told her husband of more […]

Health Update
Justin Bieber Suspends 'Justice' Tour for 2nd Time: 'I Need Time to Rest'
Another setback. Justin Bieber announced that he is suspending the rest of his Justice Tour so he can continue focusing on his health. “Earlier this year, I went public about my battle with Ramsay Hunt syndrome, where my face was partly paralyzed,” the “Peaches” singer, 28, began in a statement on Tuesday, September 6. “As the […]

Everyday Essentials
Shoes Rubbing Your Heels? Try These $9 Soft Gel Guards
Us Weekly has affiliate partnerships so we may receive compensation for some links to products and services. We’re as obsessed with shoes as the next publication, of course, but we’re not going to deny the fact they can come with many issues. Yes, we want a million pairs of shoes, but it’s ultimately pointless if […]

OMG
Chris Pine Breaks Silence on Suggestion Harry Styles Spit on Him
And that’s a wrap on SpitGate? Chris Pine’s rep spoke out amid social media speculation that Harry Styles spit on his Don’t Worry Darling costar at the Venice Film Festival. “This is a ridiculous story — a complete fabrication and the result of an odd online illusion that is clearly deceiving and allows for foolish […]

Shade
Florence Pugh's Stylist Makes Subtle Reference to Olivia Wilde Drama
The plot thickens. Florence Pugh and Olivia Wilde‘s stylists appeared to have shared their thoughts on the actresses’ rumored feud. After the Midsommar star and the Booksmart director reunited on Monday, September 5, at the premiere of their new film, Don’t Worry Darling, during the 79th Venice Film Festival, Kara Welch and Rebecca Corbin-Murray shared […]

Shop With Us
The 12 Best Padded Socks for Knee and Foot Pain
Us Weekly has affiliate partnerships so we may receive compensation for some links to products and services. If you find yourself sitting out of activities more and more often lately, we want to introduce you to the best socks for knee pain. The right pair of socks could help you relieve pain in your knees, […]

Dads
Ahoy! Scott Disick's Sweetest Fatherhood Moments Through the Years
Putting the kids first! Scott Disick has had his ups and downs over the years, but his three children have remained his top priority. “The truth is, my problems shouldn’t affect the kids,” Disick exclusively told Us Weekly in June 2019, referring to his and ex-girlfriend Kourtney Kardashian’s complicated relationship. “Just because their mother and […]

Love Lives
Alex Rodriguez and Kathryne Padgett’s Relationship Timeline
From sparks flying to splitting amicably. Alex Rodriguez briefly dated nutrionist Kathryne Padgett following his breakup with Jennifer Lopez. “He’s in the playing field looking for someone he can eventually be in a serious committed relationship with,” an insider told Us Weekly in January 2022. “He’d love to find the next ‘J. Lo’ – he […]

Controversy
Kim Kardashian Reveals Climate Change Stance: 'You Have to Pick and Choose'
Getting real — and realistic. Kim Kardashian spoke out about her beliefs on climate change amid her own carbon emissions drama. “I believe in climate change, and I believe that anything can help,” the Kardashians star, 41, told Interview magazine in its “American Dream” cover story, published on Tuesday, September 6. “But I also believe […]

LOL
Andy Cohen Is Down to Host a 'Don't Worry Darling' Cast Reunion Amid Drama
Ready to watch what happens! Andy Cohen has seen the viral tweet about him hosting a Don’t Worry Darling cast reunion — and he’s totally on board. “I’m in,” the Bravo exec, 54, commented via Instagram on Tuesday, September 6, after the account Comments by Celebs posted a screenshot of a tweet reading: “DON’T WORRY […]

Dreamy Dresses
Shop the Same 'Super Cute' Sweater Dress Kyle Richards Just Wore
Us Weekly has affiliate partnerships so we may receive compensation for some links to products and services. Now that it’s September, we can finally shop for fall! But it’s not quite sweater weather yet. In fact, we’re currently experiencing a heat wave in Southern California! Temperatures are in the upper 90s here in L.A., so […]

Exclusive
Alex Rodriguez and Girlfriend Kathryne Padgett Split: Never Got 'Serious'
Single once more. Alex Rodriguez has split from his girlfriend, nutritionist Kathryne Padgett, Us Weekly confirms. “Alex and Kathryne split. There was no drama and it was amicable,” a source exclusively tells Us. “They remain friends. They had fun the few months they dated, but it never got really serious. He’s doing just fine — […]

Women Crush
Girl Power! See Meghan Markle’s Most Inspiring Female Empowerment Quotes
This girl is on fire! Meghan Markle has never been afraid to speak out about what she believes in, including female empowerment. The California native rose to fame on Suits playing Rachel Zane, a paralegal who worked hard to achieve her dreams of becoming an attorney. While she was grateful for her steady gig on […]

Weddings
Plot Twist! Hannah Brown Confirms She Was at Brother's Wedding to Jed's Ex
Family first. Hannah Brown celebrated her brother Patrick Brown‘s wedding to Haley Stevens — despite the bride’s previous relationship with the former Bachelorette’s ex-fiancé, Jed Wyatt. “I’ve come to realize my life is a never-ending plot twist, but it makes for a damn good (for sure weird) story. 🥂🤷‍♀️🥳💕,” the reality TV personality, 27, wrote […]

Real Talk
Mindy Kaling Wonders Whether Single Motherhood Brings 'Shame' to Her Family
Keeping it real! Mindy Kaling welcomed her daughter, Katherine, in December 2017 and has been gushing about her baby girl ever since. In June 2019, the actress’ Late Night costar Scott Reid told Us Weekly exclusively what a great mom Kaling is. When asked if the Office alum is always calm, cool and collected, he said, “In […]
Previous Next