When Executive Producer Mandie DeCamp is not in Us Weekly’s video studio, she can be found in Brooklyn, New York, with her rescue dog, Pepper, and her husband, Geoffrey, likely watching Bravo or Netflix with a glass of Vanderpump Rosé or Ramona Singer’s Pinot Grig. Besides binge-watching reality television or vintage episodes of Mad Men, (Betty Draper is her idol), she also enjoys cooking, crafting or heading to the dog park.

Mandie was a journalism major at Hofstra University.

Mandie got her start as an intern at Brides and Details magazines. In 2008, she started her television and video career at Rachael Ray’s daytime talk show in the Chelsea neighborhood of New York City. She worked on everything under the sun, including heartwarming stories, makeovers, DIY segments, and of course, food! A career highlight for her was getting to go to the White House garden to watch Ray cook with former first lady Michelle Obama.

After seven years, she went on to work as a producer at Food Network’s The Kitchen in Montclair, New Jersey, where she worked with celebrity chefs and hosts like Jeff Mauro, Sunny Anderson, Geoffrey Zakarian and Katie Lee. She spent two years channeling her inner Martha Stewart to become an expert in food crafts, cakes, appetizers, DIY hacks (did you know you could dye an Easter egg with a silk neck scarf?) and more. 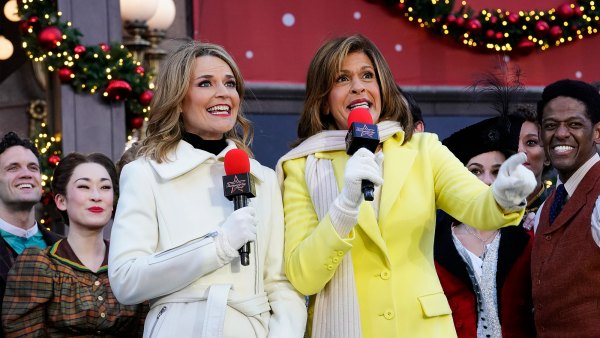 Exclusive
Hoda Kotb and Savannah Guthrie: How We Limit Kids’ Holiday Expectations
Keeping Santa in check! While Hoda Kotb and Savannah Guthrie are gearing up to host NBC’s 90th Christmas in Rockefeller Center on November 30, the Today hosts are also busy teaching their children about the holiday season at home.  “I think we really try to focus on what the holidays are about. No. 1, of […]

Stylish
The Biggest Style Mistake People Make When Packing for Vacation
Vacation mode! Summer is here and Rent the Runway’s style director Blaire Walsh is showing Us Weekly how to pack for any summer getaway — whether it’s beach vibes you’re looking for or you’re headed on a trip down south. Watch the exclusive video above to see how to pack tons of style into your […]

Recipe
Red, White and Boozy! How to Make Tom Sandoval’s Fourth of July Cocktail
Oh, say can you drink! Everyone’s favorite Bravo bartender Tom Sandoval is exclusively showing Us Weekly his go-to cocktail for the Fourth of July. The red, white and blue layered libation is the perfect “festive” addition for your holiday plans. Watch the exclusive video above to see how it’s done and scroll down for the full recipe. Pro […]

Recipes
Margarita Time! Star-Studded Cocktail Recipes for Summer
It’s 5 o’clock at Us Weekly! Cocktail Guru Mark Addison is showing Us three ways to mix up our margaritas this summer and how to take your favorite summer cocktail up a few notches. Whether you like your sips more sweet or more savory, he’s got the perfect match for you. Watch the exclusive video […]

Beauty Sleep
RHOD's Tiffany Moon’s Beauty Hack for Postpartum Hair Loss
Everything is bigger in Texas and former Real Housewives of Dallas star Tiffany Moon is proving it with her 15-product Beauty Sleep routine. Watch the video above to see the 37-year-old anesthesiologist show Us Weekly her full nighttime skincare routine. Drugstore Bargain Buy“For the last 10 years, I have been using Cetaphil Daily Facial Cleanser, […]

Beauty Sleep
Butter for Your Skin Before Bed?! Gail Simmons' Intense Beauty Routine
Utensils down, beauty up! Gail Simmons is busy getting ready for the season 19 premiere of Top Chef, but the Bravo personality took some time to show Us Weekly how she gets her Beauty Sleep on after a long day of being on set. Watch the exclusive video above to see the Canada native wind down with Us.  Though her […]

Exclusive
'Housewives' Recap With Heather McMahan: ‘I Would Thrive as a Housewife’
New Housewife alert? Comedian Heather McMahan sat down with Us Weekly’s “Getting Real with the Housewives” podcast and exclusively revealed that not only has she been approached about being a Housewife, but she’d also consider it — under certain circumstances. “They loosely reached out to my agents during the [Coronavirus] pandemic. And I was like, […]

Beauty Sleep
A Mini Makeup Fridge! See RHOSLC's Meredith Marks’ Nighttime Beauty Routine
Always prepared! Meredith Marks invited Us into her Los Angeles hotel room to show Us how she gets her Beauty Sleep. Even though the Real Housewives of Salt Lake City star was traveling, her beauty routine spared no detail and even included a portable mini fridge where she stores some of her must-have products. Watch the exclusive video above to see […]

Beauty Sleep
WWE Star Mandy Rose Shows Us How She Gets Her Beauty Sleep
Mandy Rose’s Beauty Sleep routine includes toning, lifting, cleansing and more! The WWE superstar doesn’t mess around when it comes to her nighttime skincare and beauty routine. Watch the exclusive video above to see how the C4 Energy partner gets her Beauty Sleep on. Cleanser She Swears By“My favorite makeup wipes are these Neutrogena makeup […]

Beauty Sleep
WWE Star Bianca Belair: Why I Wear Matte Lipstick in the Ring
Bianca Belair keeps her nighttime routine clean and easy. Afterall, with her WWE tour schedule jam packed, the C4energy partner doesn’t have time to mess around with too many products when it comes to getting her Beauty Sleep on. Watch the exclusive video above to see how the ESPY winner winds down for the night […]

Holidays With Us
Mark Addison Shows Us How to Throw a Holiday Party Like the Stars
‘Tis the season to add some sparkle! Lifestyle expert Mark Addison revealed to Us Weekly how the pros keep their holiday parties stylish and their guests happy. From keeping your drinks cold all night to how to style your table on a budget, watch the exclusive video above to see how the Cocktail Chameleon author can up your game and style […]

Olympics
Winter Olympians Swear by These Cold Weather Beauty Products: Watch
Getting their game faces on! With less than 100 days to go to the 2022 Winter Olympics, athletes are gearing up to go for gold at the Beijing games. Besides strict workouts and training schedules, top-tier competitors also have to prep their skin, hair and body for the cold weather. After all, Beijing’s temperatures in […]

Exclusive
Brittany Aldean Gets Ready for the Country Music Awards: Watch
Country glam! Brittany Aldean is no stranger to a red carpet, having been husband Jason Aldean’s partner to numerous awards shows and now the American Idol alum, 33, is sharing her hair, makeup and style secrets with Us Weekly exclusively. Watch the video above to follow along with the North Carolina native’s full award-show prep, […]

Exclusive
Ludacris Shares the Hardest Part of Parenting 4 Daughters
Daddy’s girls! With four No. 1 singles under his belt and over a dozen songs that have made the Billboard top 10, Ludacris doesn’t need to impress anyone these days. But the multi-platinum artist still wants to keep his four daughters — Karma, 20, Cai, 7, Cadence, 6, and Chance, 2 months   — on his […]

Beauty Sleep
‘Summer House’s Hannah Berner: ‘Why I’m Embracing My Fine Lines’
d30 and thriving! Hannah Berner is embracing her “fine lines” and has no qualms about that. Watch the Summer House alum show Us Weekly her full nighttime skincare routine in the latest episode of “Beauty Sleep” above and see how the reality star combats dry skin, breakouts and more.  Makeover Remover of the Stars“I think Kim […]

Exclusive
Spencer Pratt on Fatherhood: ‘This Is the Best Part of Life’
Spencer Pratt is embracing every part of fatherhood — even if it means walking six miles through the San Diego Zoo. The Hills star, 38, sat down with Us Weekly and gushed over how becoming a dad has made him forget his goals of becoming rich and famous, and instead, made him realize the simple moments of parenting […]

Exclusive
Jana Kramer: ‘I Bite My Lip a Lot’ When Coparenting with Ex Mike Caussin
Her new normal. Jana Kramer and Mike Caussin split in April after nearly six years of marriage and the country music star, 37, is still trying to perfect coparenting their two kids — Jolie, 5, and Jace, 2. “It’s very hard. I have no problem saying, like, the other day, I didn’t do it perfectly. […]

Exclusive
Madison LeCroy’s Answers Most-Asked Beauty Question: Her Lip Routine
Hot girl fall! Madison LeCroy spilled out the contents of her beauty bag with Us and the Southern Charm star, 30, gave her best trick for lashes, under-eye bags and more. Watch the exclusive video above to see what’s inside her beauty bag and catch the Bravo personality on Amazon Live’s Beauty Haul September 29 at 6 p.m. ET. […]

Exclusive
Captain Sandy Is Taking a Break From Yachting to Pursue Side Hustle
Fresh off the boat and onto the stage! Captain Sandy Yawn is setting sail into a new adventure, but this one won’t be on the water. The Below Deck Mediterranean star is gearing up for her Lead-Her-Ship Tour, which will include musical guests and the Bravo star’s personal stories of how she navigated life before fame.  “I want to […]

Moms Like Us
Scheana Shay Felt Pressure to Bounce Back After Baby: It's a ‘Challenge’
The pressure to bounce back after baby felt very real for Scheana Shay. The Vanderpump Rules star, 36, who welcomed daughter Summer with fiancé Brock Davies in April, sat down with Us Weekly to share the ups and downs that have come with being a new mom. Just days after Summer was born, the Bravo star began filming season 9 […]
Next