When Executive Producer Mandie DeCamp is not in Us Weekly’s video studio, she can be found in Brooklyn, New York, with her rescue dog, Pepper, and her husband, Geoffrey, likely watching Bravo or Netflix with a glass of Vanderpump Rosé or Ramona Singer’s Pinot Grig. Besides binge-watching reality television or vintage episodes of Mad Men, (Betty Draper is her idol), she also enjoys cooking, crafting or heading to the dog park.

Mandie was a journalism major at Hofstra University.

Mandie got her start as an intern at Brides and Details magazines. In 2008, she started her television and video career at Rachael Ray’s daytime talk show in the Chelsea neighborhood of New York City. She worked on everything under the sun, including heartwarming stories, makeovers, DIY segments, and of course, food! A career highlight for her was getting to go to the White House garden to watch Ray cook with former first lady Michelle Obama.

After seven years, she went on to work as a producer at Food Network’s The Kitchen in Montclair, New Jersey, where she worked with celebrity chefs and hosts like Jeff Mauro, Sunny Anderson, Geoffrey Zakarian and Katie Lee. She spent two years channeling her inner Martha Stewart to become an expert in food crafts, cakes, appetizers, DIY hacks (did you know you could dye an Easter egg with a silk neck scarf?) and more.

Moms Like Us
Lindsay Arnold: My First 12 Weeks of Pregnancy Were ‘Very Tough’
Celeb moms are just like Us. Some, like Dancing With the Stars’ Lindsay Arnold, even battle morning sickness. The Utah Native, 26, exclusively sat down with Moms Like Us hosts Christina Garibaldi and Stroller In the City’s Brianne Manz to share just how “tough” her first trimester was. Watch the video above to see what she had to say. “Right now […]

Moms Like Us
Amanza Smith Opens Up About Dating As a Single Mom
The struggle is real! Selling Sunset star Amanza Smith exclusively sat down with Moms Like Us hosts Christina Garibaldi and Stroller In the City’s Brianne Manz to share not only what it’s like to date as a single mom, but also what it’s been like to date during quarantine. Watch the second episode of the new series Moms Like Us above […]

Moms
'Moms Like Us': Us Weekly's Brand New Show Explores Celeb Moms
Celeb moms are just like Us! They struggle with breastfeeding, lack of sleep and even homeschooling during lockdown. Us Weekly’s host Christina Garibaldi teams up with Stroller in the City blogger Brianne Manz to tackle all your parenting questions, exclusively interview your favorite celeb moms and dads and breakdown all the celebrity parenting news of the week in the new show Moms […]

Exclusive
Lance Bass: How I’m Spending My Days During the Coronavirus Outbreak
Lance Bass isn’t ready to say “Bye, Bye, Bye” to quarantine lockdown just yet. The former ‘NSync member is sheltering in place with husband Michael Turchin and the duo have filled their time with puzzles, baking, building grills and, of course, some cocktails! Watch the exclusive video above to see how the couple has been […]

Inside My Kitchen
Inside My Kitchen: Chef Judy Joo Shares Her Recipe for Bircher Muesli
While you might be cooped up inside, that doesn’t mean you have to eat bad food! Chef Judy Joo invited Us Weekly into her kitchen to show Us how to make Bircher Muesli. The name sounds fancy, but the Swiss-origin dish is actually quite simple, satisfying and bonus — it’s good for you! The dish is perfect as a post-workout hearty snack or for […]

Exclusive
Inside My Kitchen: Chef Rocco DiSpirito Shares His Easy No-Bake Chocolate Chip Cookie Recipe
No oven required! Give your oven a rest this week with an easy no-bake recipe for chocolate-chip cookies that are not only delicious, but also totally sugar-free. Chef Rocco DiSpirito invited Us Weekly into his kitchen to show how to make the recipe that’s so simple, you can have your kids help out with it. Watch the exclusive video above — “Inside My Kitchen: Quarantine Edition” to […]

Exclusive
Inside My Kitchen: Chef Anne Burrell Shares Recipe for Her Veggie and Peanut Noodles
If you’re like Us, you’re a bit tired from cooking breakfast, lunch and dinner every day and night during the current lockdown. But luckily, celebrity chef Anne Burrell is cooking us up an easy dinner recipe that can be made with simple pantry ingredients. Plus, if you don’t have one or two, just substitute with […]

Us Musts
Us Musts: Must-See TV, Movies and More Entertainment to Watch This Week
While it might feel like day 10,000 of staying home, there is still a plethora of new TV, movies and music to catch up on while social-distancing! Us Weekly rounded up all of the must-see entertainment news of the week in Us Musts, with a focus on some ladies we absolutely love! Watch the video […]

Stylish
9-Months-Pregnant Iskra Lawrence Models 7 Different Swim Looks Unretouched
Glowing goddess! Iskra Lawrence models a series of swimsuits 9-months pregnant on her YouTube channel and it’s one of the most stunning things we’ve ever seen. On Thursday, April 9, the 29-year-old model shared a sped-up version of the video on her Instagram feed, in which she tries on a bunch of different swimwear looks. […]

Us Musts
Us Musts: Must-See TV, Movies and More Entertainment to Watch This Week
Social distancing just got a whole lot easier! Us Weekly has rounded up all the TV shows, movies and music to add to your at-home agenda this week. Watch the video above and scroll down to see the full list of must-see entertainment, which all just so happen to feature women who are totally kicking […] 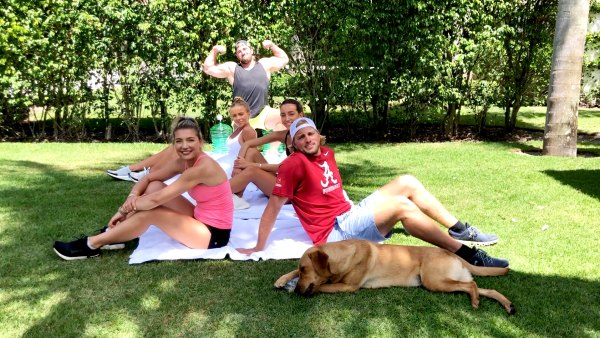 Exclusive
The Busch Family Shows Us At-Home Workouts to Do With Your Quarantine Buddy
Beer and burpees?! The Busch family, who are descendants of the Anheuser-Busch family, from MTV’s Busch Family Brewed may be known for their beer empire, over-the-top parties and their 700-acre estate in Missouri, but they proved to Us Weekly that when they’re not drinking a Budweiser, they can also break a sweat.  In the exclusive […]

Exclusive
Try ‘Biggest Loser’ Host Bob Harper’s 7-Minute Do-Anywhere Core Workout
Missing the gym and worried about all those quarantine snacks? Bob Harper is here to help! The Biggest Loser host and three-time best-selling author shared a core workout with Us Weekly that he promises can be done anywhere, by nearly anyone — so there are no excuses for not moving off the sofa while you’re […]

Exclusive
Stephen ‘tWitch’ Boss and Allison Holker Play the Not-So Newly Married Game
The couple who TikToks together, stays together?! Stephen ‘tWitch’ Boss and Allison Holker, who entertain their combined 4.2 million followers with numerous dance routines on a daily basis via Instagram and TikTok, tell Us Weekly that dancing is a way for the couple to “come together and just let loose.” To hear the duo reveal their current […]

Exclusive
Where the 'Jersey Shore' Cast Sees Themselves in 10 Years
In the year 2030, the cast of Jersey Shore sees themselves with kids, with a food show … and still stripping. In the exclusive video above, Mike ‘The Situation’ Sorrentino, Vinny Guadagnino and Angelina Pivarnick to chat about the current season of Jersey Shore Family Vacation and opened up about where they see themselves in […]

Bachelor
Comedian Jared Freid Breaks Down Every Episode of ‘The Bachelor’
Every rose has its thorn, and for Peter Weber, he’s got quite a few thorns after his season of The Bachelor. Comedian Jared Freid walked Us Weekly through every episode — and “The J Train” podcast host didn’t hold anything back. From dissecting Barbara Weber’s reactions to reminiscing about windmills, watch the entire series here. Plus, […]

PETS
These Adoptable Pups Are Looking for a Valentine — Watch
Puppy love! Five adorable puppies from Best Friends Animal Society New York stopped by Us Weekly’s studio to try to find a Valentine. While some of the dogs are looking for a more energetic, sporty partner, others were hoping to find a quieter home. The adorable hounds showed off their best wrestling moves, puppy dog […]

Valentine's Day
Us Weekly’s Interactive Valentine’s Day Gift Guide — Watch
Valentine’s Day is right around the corner, but it’s not too late to shop for the one you love. Us Weekly has rounded up fashion, tech, food and more gifts that will impress your Valentine. With prices starting at just $14.99, there is something for everyone – no matter what your budget is. Watch […]

Food
Inside My Kitchen: Ginger Zee’s Stunning Kitchen and Easy Pasta Recipe
Ginger Zee invited Us Weekly into her Rockland County, New York, home to catch a glimpse of her stunning kitchen and make one of her family’s signature weeknight recipes – a “pasta explosion.” Watch the video above to see the gorgeous space that she shares with TV personality husband Ben Aaron and their children, Adrian, […]
Previous Next