Move over, Angelina Jolie! There’s a new Disney villain in town and he goes by the name of 50 Cent.

The Animal Ambition rapper, 38, teamed up with Jimmy Kimmel this week to give Jolie a run for her money with a new version of her latest film Maleficent.

Sitting down with the talk show host for Thursday’s episode of Jimmy Kimmel Live, 50 Cent teased the spoof, telling Kimmel, “I did a project… I did a big one, real big one.”

Saying the film “ain’t going to no Redbox,” 50 introduced his trailer for Malefiftycent.

The clip opens with the Disney logo and the classic shot of a castle on the top of a mountain. Then, borrowing from Jolie’s blockbuster Maleficent, the camera pans to a silhouette of a horned figure, while a young girl says, “I know who you are. Your shadow, it’s been following me ever since I was small. Don’t be afraid.” 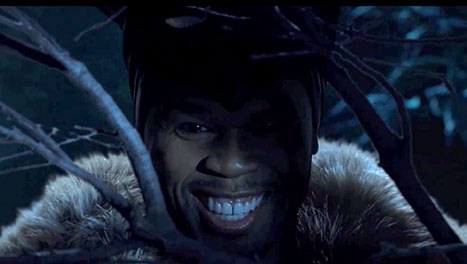 After the preview teases, “The story you know, the villain you don’t,” viewers are introduced to the “Pilot” rapper as Maleficent, black horns and all.

PHOTOS: 50 at the Oscars

“I been shot nine times, I’m not afraid of no little white girl,” Malefiftycent says in the clip. “This s–t just got magical.”

Watch the rapper’s hilarious attempt to “Get Witch or Die Tryin'” in the video above!