Free Samples! Have Top Health & Wellness Picks Shipped to You at No Cost
These Denim Joggers Are Our Secret to Cool, Casual Comfort
These Stunning Ruched One-Piece Swimsuits Show Just the Right Amount of Skin
END_OF_DOCUMENT_TOKEN_TO_BE_REPLACED

Kelly Ripa and Mark Consuelos continue to prove that their love is still very much alive after 22 years of marriage — one steamy Instagram comment after the next!

The talk show host, 48, shared a flirty message for the Riverdale star, 47, in the comments section of his post on Tuesday, January 29. “Hey I’m taking over @thecwriverdale Instagram page tomorrow….check it out for some behind the scenes shenanigans,” Consuelos wrote, prompting Ripa to put her own spin on the caption.

“Oooooooooooo. Daddy, I love when you take over,” the Hope & Faith alum gushed, adding five fire emojis. Over on Ripa’s page, Consuelos returned the favor, leaving a cute note underneath one of her pics. 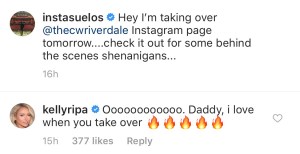 “Leave the gun, take the cannolis,” the Alpha House actor commented on a snap of his love that shows her in character for her guest role on Riverdale, making a nod to her Italian heritage.

Ripa and Consuelos — who eloped in Las Vegas in May 1996 and share three kids, Michael, 21, Lola, 17, and Joaquin, 15 — are no stranger to showing PDA on social media. Earlier this month, the New Jersey native couldn’t contain her excitement below a photo of her handsome hubby, writing a spicy comment about him not having a bad side. “Didn’t know there was” one she quipped.

Consuelos, for his part, opened up about their strong relationship during an interview with Us Weekly. “I’m crazy about her,” he gushed earlier this month. “She’s an extremely patient and a tolerant woman, and I think that’s the true secret to our marriage.”

Ripa announced in November that she will guest star as her real-life husband’s mistress on the Wednesday, January 30, episode of the hit CW series. That same month, the Live With Kelly and Ryan cohost spoke with Us about the key to the couple’s successful marriage.

“We like each other, so that helps! But it wasn’t always so easy,” she told Us at the time. “I can’t picture my life without him.”

Free Samples! Have Top Health & Wellness Picks Shipped to You at No Cost
These Denim Joggers Are Our Secret to Cool, Casual Comfort
These Stunning Ruched One-Piece Swimsuits Show Just the Right Amount of Skin
END_OF_DOCUMENT_TOKEN_TO_BE_REPLACED
Close widget