Sarah Michelle Gellar Admits Her and Freddie Prinze Jr.’s Parenting ‘Expectations Are a Little Higher Than Most’
Shoppers Say This Is the Softest Cardigan You’ll Ever Own
La Adelita Tequila: The Hottest New Drink in Aspen
END_OF_DOCUMENT_TOKEN_TO_BE_REPLACED

A possible bump in the road. Musician Robert Ritchie, better known to fans as Kid Rock, might be unable to use his stage name on the ballot for his possible Senate run in Michigan next year. The 46-year-old rocker, who in July slammed rumors that his political website was a hoax, has confirmed his interest in challenging Democratic Senator Debbie Stabenow in the 2018 midterm elections. “I have had a ton of emails and texts asking me if this website is real…,” the Michigan native wrote that month on Twitter. “The answer is an absolute YES.”

To move forward, the star would first need to submit enough valid signatures to secure a spot on the ballot and indicate he’d like to be listed as “Kid Rock.” The Michigan Bureau of Elections staff would then need to research whether his stage name would be permissible. 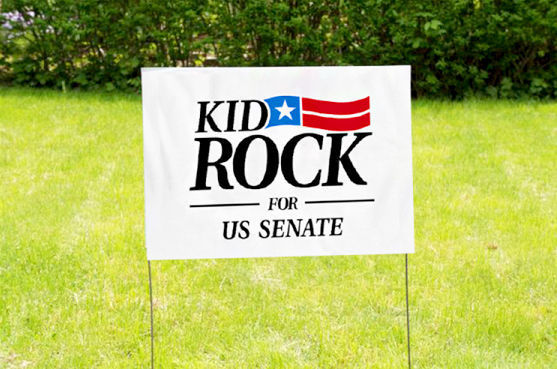 There are several stipulations under Michigan’s Affidavit of Identity and Receipt of Filing that would determine if the People’s Choice Awards winner can have his stage name printed on the ballot.

According to the law, a candidate “may specify that both his or her given name and middle name, or only a middle name, shall appear on the ballot,” or “may specify a name that constitutes a common law name in accordance with the Michigan Department of State Guidelines.” The rules also say candidates may not use a “nickname that is not a recognized diminutive of the candidate’s given name.”

If the “American Bad Ass” singer chooses to run as Robert Ritchie instead of Kid Rock, he might lose his celebrity advantage.

Stars Who Played the President

And as for Rock’s political opponent, 67-year-old Stabenow, she doesn’t seem too concerned about her potential competition’s level of fame.

The seasoned senator made a dig at Rock in July when she tweeted, “I know we both share a love of music. I concede he is better at playing the guitar, and I’ll keep doing what I do best, which is fighting for Michigan.”

The “I Am Bullgod” rapper responded to Tabenow’s tweet the following day with a message he shared on his political website.

“Senator Stabenow and I do share a love of music, although probably not the same kind. He shot back. “I concede she is better at playing politics than I am so I’ll keep doing what I do best, which is being a voice for tax paying, hardworking AMERICANS and letting politicians like her know that We the People are sick and tired of their buls‑‑t.”

Sarah Michelle Gellar Admits Her and Freddie Prinze Jr.’s Parenting ‘Expectations Are a Little Higher Than Most’
Shoppers Say This Is the Softest Cardigan You’ll Ever Own
La Adelita Tequila: The Hottest New Drink in Aspen
END_OF_DOCUMENT_TOKEN_TO_BE_REPLACED