Duchess Kate Reportedly Uses This Natural Alternative to Botox — 31% Off!
Jennifer Aniston’s Facialist Compared This Mascara to Having Lash Extensions
Grab One of the Best Deals on Apple AirPods in Years — 50% Off!
END_OF_DOCUMENT_TOKEN_TO_BE_REPLACED

Finger wag. In Kim Kardashian‘s revealing new spread for Love magazine, momager Kris Jenner also gave a short interview, where she opened up about her relationship with ex-husband Bruce Jenner. The one question she refused to entertain, however, was about the former Olympian’s talked-about gender transition.

Love posed the question: “Where did the rumors that he is transitioning come from?”

PHOTOS: Bruce Jenner through the years

As Us Weekly reported in the Feb. 16 issue, the mother of six has been in denial about Bruce’s gradual change from male to female. “Kris is in complete denial about what’s going on with Bruce,” a pal told Us. “She doesn’t talk about it at all and refuses to acknowledge it.”

While Kris was dismissive about that particular question, she said their friendship is solid.

PHOTOS: Kris Jenner through the years

“Bruce is great. Bruce is good,” Kris told Love. “We’re good friends. In life, you realize on some level you’re happier living apart than you are together and that’s what happened with us. We just grew apart. We weren’t getting along like two people in love should be getting along. And it’s been kind of amazing, you know?”

She added that the family’s reality show Keeping Up With the Kardashians was unrelated to the disintegration of their 22-year marriage. “No. No, not at all, it has nothing to do with it,” she told the mag. “We live our lives the way we would anyway. It just happens to be on camera.”

The source told Us that the parents to Kendall, 19, and Kylie, 17, discussed Bruce’s secret for years. “He needed to live his life the way he wanted to,” the family insider explained, “so they split.” 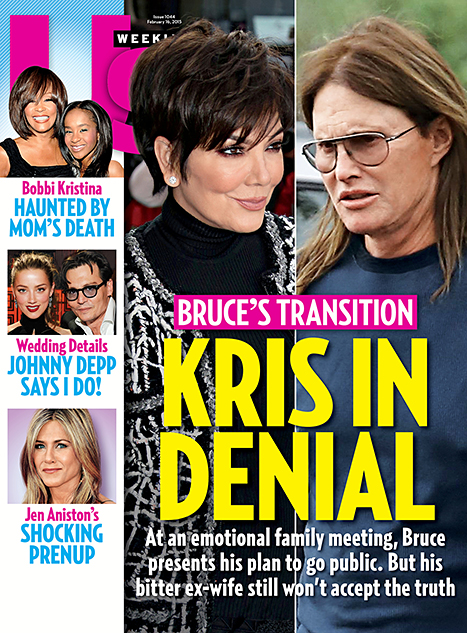 As previously confirmed by Us, Bruce is opening up about his choice — in his own time. The Olympic gold medalist will share his decision in a sit-down with Diane Sawyer; He is also currently documenting his transition for an untitled E! series.

His ex-wife, meanwhile, has currently found a younger distraction in 34-year-old Corey Gamble. Despite her rapid rebound, Kris told Love that she’s not so sure about another marriage. “I don’t have a crystal ball,” the twice-divorced star reflected. “I always said I wouldn’t, but that doesn’t mean anything.”

As for the one celebrity hunk she would consider taking on a date? “I don’t know. They’re single for a day?” Kris mused. “George Clooney just got married. Keanu Reeves is really cute. Isn’t he great?”

Duchess Kate Reportedly Uses This Natural Alternative to Botox — 31% Off!
Jennifer Aniston’s Facialist Compared This Mascara to Having Lash Extensions
Grab One of the Best Deals on Apple AirPods in Years — 50% Off!
END_OF_DOCUMENT_TOKEN_TO_BE_REPLACED