A bittersweet goodbye. The late Robin Williams will grace big screen for one of his final roles next month.

The beloved actor, who committed suicide this past August at the age of 63, appears in the upcoming holiday comedy A Merry Friggin’ Christmas, which debuted a new trailer on Thursday, Oct. 9.

Williams stars in the latest clip alongside Lauren Graham, Wendi McLendon-Covey, Jeffrey Tambor, Joel McHale, and Candice Bergen, among others.

The trailer opens with a shot of McHale and Graham playing parents Boyd and Luann Mitchler, dressing the Christmas tree with their children. Boyd soon learns that he will be spending the holiday with his father Mitch (Williams) and the rest of his family — a revelation he is far from pleased with. 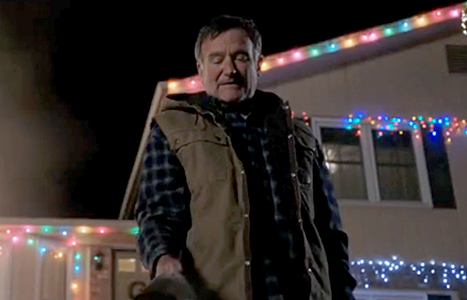 Williams is introduced as a cynical, biting man. The father and son are forced to spend time together as they embark on a road trip to pick up forgotten presents and save Christmas.

A Merry Friggin’ Christmas is one of the last movies Williams filmed before his unexpected death. The Oscar-winning actor will also appear in Night at the Museum: Secret of the Tomb this coming December, and Absolutely Anything next year.

Watch the preview for A Merry Friggin’ Christmas above, and catch the comedy in theaters on Nov. 7.