Scoop up Amazon's Most In Demand Pull Up Sweater for 46% off!
Jennifer Aniston’s Facialist Compared This Mascara to Having Lash Extensions
Scoop Up the Foot Massager Kris Jenner Gifted to Her Daughters — $120 Off!
END_OF_DOCUMENT_TOKEN_TO_BE_REPLACED

Less than two weeks after her birth at L.A.’s Cedars-Sinai Medical Center, Pearl Osbourne, the first child of Jack Osbourne and fiancee Lisa Stelly, makes her debut on the cover of Britain’s HELLO! magazine.

Cradled by famous grandmother Sharon Osbourne, Pearl wears a darling white dress as proud parents Jack and Lisa (who got engaged in September 2011) beam peacefully for the cameras.

The little girl (her grandfather is Ozzy Osbourne and her aunt is Kelly Osbourne) weighed 8 lbs., 6. oz. at birth. 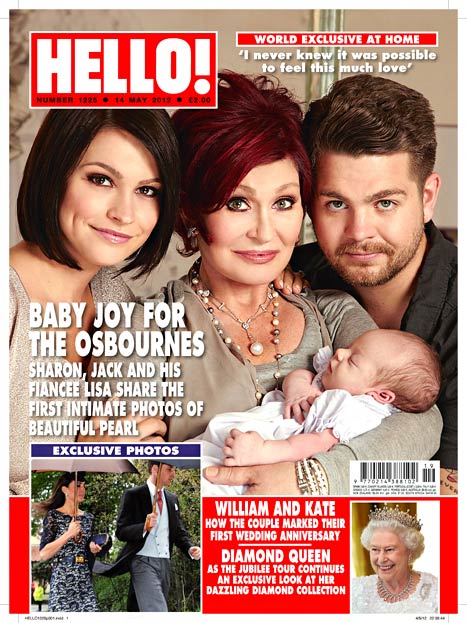 “People say when you have a kid it’s like instant love, but unless you’ve experienced it, it’s impossible to comprehend,” former reality star and director Jack, 25, explains to HELLO!

He and aspiring actress Lisa, 26, met at a club and had only been dating for three months when she discovered she was pregnant — and his first reaction was far from ecstatic, he admits.

“I think I responded with ‘That’s interesting’,” he reveals. “What do you say? If we’d been trying for two years, of course you’d be like ‘Awesome!’ But we met in May and found out in August.

His first freaked-out call went to his former nanny, Melinda. “”I just said, ‘S*** What do I do? She talked me off the ledge,” he recalls.

Now that Pearl is here, however, Jack and Lisa are absolute naturals, Sharon, 59, says proudly.

“It’s incredible to see Jack holding his baby girl, walking around so confidently . . .He’s very nurturing and he and Lisa are so good together.”

See the full exclusive article in HELLO! out now.

Scoop up Amazon's Most In Demand Pull Up Sweater for 46% off!
Jennifer Aniston’s Facialist Compared This Mascara to Having Lash Extensions
Scoop Up the Foot Massager Kris Jenner Gifted to Her Daughters — $120 Off!
END_OF_DOCUMENT_TOKEN_TO_BE_REPLACED