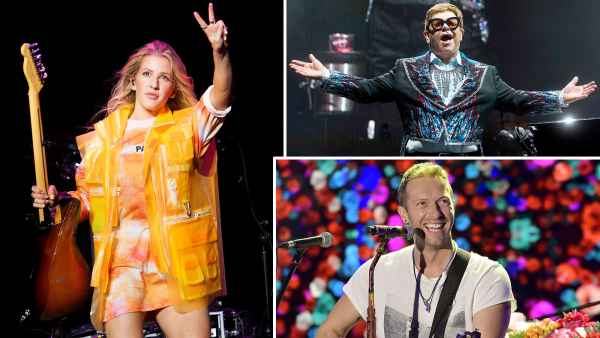 Royals
Coldplay! Ellie Goulding! Abba! Music the Royal Family Loves
While it’s unlikely that the royals have a Spotify Family plan, Prince Harry, Prince William and their relatives have disclosed their music tastes in the past. “I used to play the piano, trumpet and drums when I was your age but I couldn’t read music. There’s only so much you can remember from the top […]

Royals
Spot the Stars! Kate Recruits 'Love Island' Alum, More for Campaign Launch
Famous helping hands! Princess Kate marked the launch of her latest children’s campaign with a few notable celebrities. The Princess of Wales, 41, is continuing her work with The Royal Foundation Centre for Early Childhood with the new Shaping Us campaign, which she promoted in an Instagram video on Wednesday, February 1. “You may not […]

Exclusive
Harry and Meghan Have Not Received a ‘Personal Apology’ From Royal Family
Still at odds. Much to his dismay, Prince Harry‘s relationship with the royal family remains unchanged after the release of his bombshell memoir, Spare. “No apology to Meghan [Markle] has been made by the Palace, which frustrates Harry. Nor has he received a personal apology,” a source exclusively reveals in the new issue of Us […]

Royals
Prince William and Prince Harry’s Complicated Relationship Over the Years
A tale of two brothers. Prince William and Prince Harry may be royalty, but their relationship may remind you of your own sibling. “Their relationship is incredibly intimate,” Princess Diana’s biographer Andrew Morton revealed in the November 2019 edition of Royals Monthly. “Nobody apart from each other knows exactly — not even their father — […]

Exclusive
Prince William Thinks Harry Is 'All Smoke and Mirrors,' Can't 'Be Trusted'
The royal rift continues? Prince William “wants to move on” after the release of Prince Harry‘s bombshell memoir, a source exclusively reveals in the new issue of Us Weekly. William, 40, “has made no effort to speak to Harry” following the debut of Spare in January, the insider tells Us. The Duke of Sussex, 38, […]

Royals
Princess Kate Comforts a Man Who's 'Nervous' to Take a Selfie With Her
Royal reassurance! ​Princess Kate offered a calming response to a man who admitted he had anxiety about meeting her. In a clip shared via Twitter by GB News reporter Cameron Walker, a gentleman asked Kate, 41, to take a selfie with him as the Princess of Wales walked through Leeds Kirkgate Market on Tuesday, […]

Family Time
Priscilla! Whoopi! Celebrities Who Are Great-Grandparents
Living legacies! While many celebrities in Hollywood are grandparents, only a special few get to meet the fourth generation of their family. Queen Elizabeth II was a great-grandmother of 12 before her death at age 96 in September 2022. Her Majesty, the longest reigning British monarch, not only spent significant time with her eight grandchildren […]

Royals
Princess Kate Stuns in Red Pantsuit Ahead of Early Years Campaign Launch
Making a statement. Princess Kate was dressed to impress as she prepared to launch her new campaign on early childhood development advocacy. The Princess of Wales, 41, who turned heads in a red wrap blazer and flared pants, attended London’s BAFTA event on Monday, January 30, with Prince William. Her husband, 40, matched with Kate […]

Royals
Lady Susan Hussey Attends Church With Royal Family After Resigning
Lady Susan Hussey joined members of the royal family for church service on Sunday, January 29, following her resignation as a palace aide amid a racist incident last year. The former lady-in-waiting, 83, for the late Queen Elizabeth II was seen walking to and from St. Mary Magdalene in Sandringham. King Charles III and Princess […]

Royals
James Middleton Thanks Sisters Kate and Pippa for Joining Therapy Sessions
Supportive sisters. James Middleton publicly thanked both Princess Kate and Pippa Middleton for joining him in therapy sessions amid his battle with major depressive disorder. The Boomf founder, 35, opened up about the death of his dog, Ella, and how he struggled to mourn the cocker spaniel who previously got him through some of his […]

Royals
Prince Harry Through the Years: His Military Career, Fatherhood and More
Life on his own terms. Prince Harry is unlikely to become the king of England, but he’s carved a unique path as a philanthropist, father and military veteran. King Charles III and Princess Diana welcomed their youngest son in September 1984, two years after the arrival of Prince William. Unlike his older brother — who […]

Exclusive
Royal Family 'Probably' Laughed at Kim Buying Diana's Cross, Expert Claims
The Kardashian family jewels. Kim Kardashian made headlines earlier this month when she bought Princess Diana’s iconic Attallah cross — and royal expert Valentine Lowe is telling Us Weekly how the royal family might’ve reacted to the sale. “I think they probably laugh at it. Laugh about it over the breakfast table and move on,” […]

Exclusive
What Meghan Markle Has Been Up to Following Prince Harry’s ‘Spare’ Release
Laying low. Meghan Markle has been staying out of the spotlight since Prince Harry dropped his bombshell Spare memoir. “Meghan has been keeping her head down in Montecito, taking care of the kids and working on projects that are coming up in the months ahead,” a source exclusively reveals in the new issue of Us […]

Exclusive
Will Meghan and Harry's Titles Be Stripped? Why 1 Expert Doesn't Think So
Trying to move on. Prince Harry‘s memoir, Spare, has stirred up plenty of drama, but royal expert Jonathan Sacerdoti doesn’t think the palace will go so far as to strip him of his titles, despite a member of British Parliament pushing to do so. “The sense I get is that this is not something they […]

Exclusive
Harry Could Form 'Temporary' Truce With Family for Coronation, Expert Claims
Keep calm and carry on? The royal family could temporarily bury the hatchet with Prince Harry and Meghan Markle for the sake of King Charles III’s forthcoming coronation, according to royal expert Jonathan Sacerdoti. “I suspect that there are some efforts going on to try and make some form of reconciliation … I think because […]

Love Lives
Princess Eugenie and Jack Brooksbank's Relationship Timeline
A royal happily ever after! After more than a decade together, Princess Eugenie and Jack Brooksbank remain as in love as ever. Following a lengthy long-distance romance, Brooksbank got down on bended knee in front of the princess during a joint trip to Nicaragua in January 2018. “The lake was so beautiful. The light was […]

Babies
A Royal Pregnancy! Princess Eugenie, Jack Brooksbank Expecting Baby No. 2
Another royal baby! Princess Eugenie revealed on Tuesday, January 24, that she is pregnant with her and husband Jack Brooksbank‘s second child. “We’re so excited to share that there will be a new addition to our family this summer,” the 32-year-old princess captioned a sweet pic taken by Brooksbank, 36, of her and son August, […]

In Memoriam
Sarah Ferguson Mourns 'Sissy' Lisa Marie With Graceland Memorial Eulogy
Forever sisters. Sarah Ferguson paid tribute to her longtime friend Lisa Marie Presley at her Sunday, January 22, funeral. “I stand here with great honor because we called each other ‘sissy’ and I’ve been with you all for all your lives really,” the Duchess of York, 63, said during the service, which was held in […]

Royals
Everything to Know About King Charles III's Official Coronation
Making it official. King Charles III immediately assumed his rightful place as sovereign upon Queen Elizabeth II’s death at the age of 96 in September, and his coronation date has finally been set. According to a press release from Buckingham Palace, the coronation — which is set to take place on May 6, 2023 — […]

Royals
Princess Kate: How I Try to 'Squeeze In' Workouts as a Mom
Royal routine! Princess Kate opened up about how she balances exercise with her busy schedule of royal engagements, motherhood and more. The 40-year-old duchess hosted an event for the England Wheelchair Rugby League team on Thursday, January 19, at Hampton Court Palace to celebrate their Rugby League World Cup Final victory in November 2022. When […]

Royals
Princess Kate Makes 1st Solo Appearance Since Prince Harry's 'Spare' Release
First solo outing of the year. Princess Kate was all smiles during a royal engagement at Foxcubs Nursery on Wednesday, January 18. “Learning through play at Foxcubs Nursery!” an Instagram posted from the Princess of Wales’ joint social media account with husband Prince William captioned a video. “Outstanding early years settings like this play a […]

Exclusive
How the Palace Feels About Harry Releasing Kate and Meghan's Text Messages
Giving the full picture. Prince Harry felt “strongly” about including texts exchanged between Princess Kate and Meghan Markle in his book, a source exclusively reveals in the new issue of Us Weekly. The Duke of Sussex, 38, released Spare, his debut memoir, on January 10 — but its chapters were already making headlines before hitting […]

Royals
Prince William Makes Solo Appearance Amid Prince Harry's 'Spare' Interviews
Back to work. Prince William made his first solo appearance since the release of Prince Harry‘s Spare memoir and his subsequent press tour. The Prince of Wales, 40, visited Together as One in Slough, England, on Tuesday, January 17, one week after his brother, 38, released his headline-making book. The organization — founded in response […]

Royals
Meghan Markle and Prince Harry Slam Jeremy Clarkson’s Apology
British broadcaster Jeremy Clarkson is facing serious backlash for a column he penned about his hatred for Meghan Markle — with thousands of readers, several political figures and his even own daughter declaring he went too far. “I hate her. Not like I hate [Scottish First Minister] Nicola Sturgeon or [English serial killer’ Rose West. […]
Load More