A hateful woman named Christine Mcmullen Lindgren was fired from her job at Bank of America after posting a racist rant on Facebook.

“I hate face book for this reason you f –king, n—-rs,” Lindgren wrote on Wednesday, June 1. “Go back to Africa get over your pity party you created this hatred.”

The Atlanta-based personal banker continued: “Do something with your lives and your children’s live I’m sure you don’t work collect welfare and teach hatred your poor children all 5 of them you can’t afford because I pay for them.” 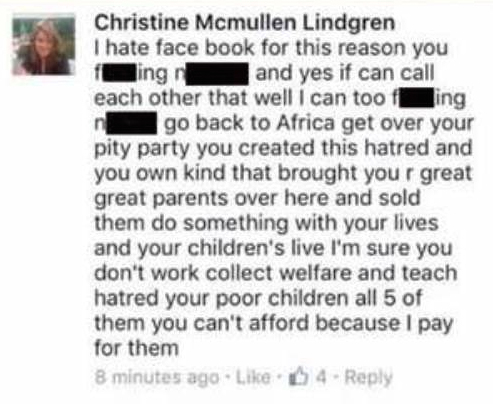 Within hours, Bank of America was inundated with thousands of complaints. And on Thursday, the financial institution announced that Lindgren was no longer on the payroll.

PHOTOS: Stars Who Were Fired From Jobs

We are aware of an unacceptable post on Facebook. The comments are reprehensible. We have terminated the employment of the individual.

“We are aware of an unacceptable post on Facebook,” Bank of America said in a statement. “The comments are reprehensible. We have completed our investigation and have terminated the employment of the individual who posted the comments.”