It’s official! After weeks of speculation and rumors, Beyonce and Jay Z finally announced they are teaming up on stage for an upcoming On The Run summer tour.

The married couple will tour the U.S. and Canada together in 16 announced dates. Scheduled shows begin in Miami on Jun. 25, hitting big cities including Philadelphia, Houston, Toronto, and Chicago. Beyonce’s concerts with Jay Z come just three months after the wrap of her 11-month international Mrs. Carter Show World Tour.

This will be the first official joint concert series for Beyonce, 32, and Jay Z, 44. The parents to daughter Blue Ivy—who celebrated their sixth wedding anniversary earlier this month—have performed onstage together in the past, making guest appearances on each other’s tours.

Mr. and Mrs. Carter announced their summer plans on Monday, April 28, releasing a poster and promoting the dates. The tour is named after Beyonce and Jay Z’s collaboration song “Part II (On the Run)” from Jay’s 2013 album Magna Carta… Holy Grail. The song followed the pair’s 2002 collaboration “’03 Bonnie & Clyde” from Hov’s 2002 album The Blueprint 2. The super-couple have also collaborated on such smash Beyonce tracks as “Crazy in Love,” “Deja Vu,” and “Drunk in Love.” 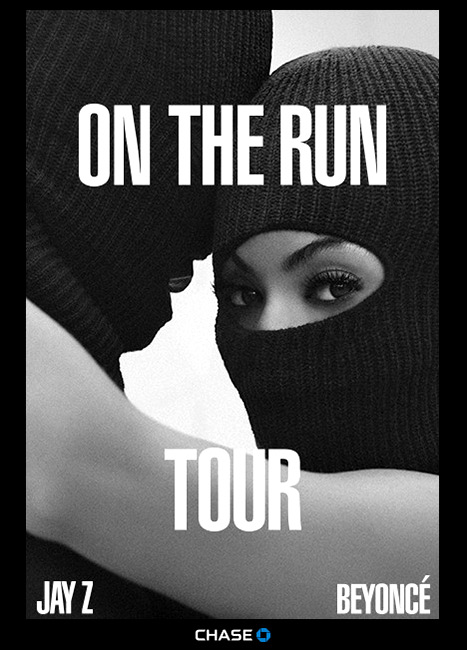 The promotional poster for the On The Run tour shows Jay Z and Beyonce embracing and wearing ski masks, following the criminals-on-the-lam narrative of the couple’s two singles. Bey also rocked a similar mask for the video to her song “Superpower” with Frank Ocean from her surprise 2013 album Beyonce.

Pre-sale tickets for the On The Run tour go on sale on Tuesday, April 29.