Holy moly! Kim Kardashian was slammed by fans online after she released a new Kimoji candle with her likeness as the Virgin Mary on it on Thursday, April 20.

The 36-year-old reality star advertised a spontaneous drop in honor of pot-centric 4/20, also known as “Weed Day,” on her social media channels, and the candle was displayed front and center on her Kimoji.com website, wedged between a $35 “ass tray” ashtray and a $12 pair of “fire weed” socks.

The candle retails for $18. Other items that the Keeping Up With the Kardashians star is selling: three different printed rolling papers (including one with Kardashian’s shocked face emblazoned over marijuana plants), a baseball cap that has the words “Sorry for what I said while I was high” emblazoned on it, and a Cheetos fingers air freshener. 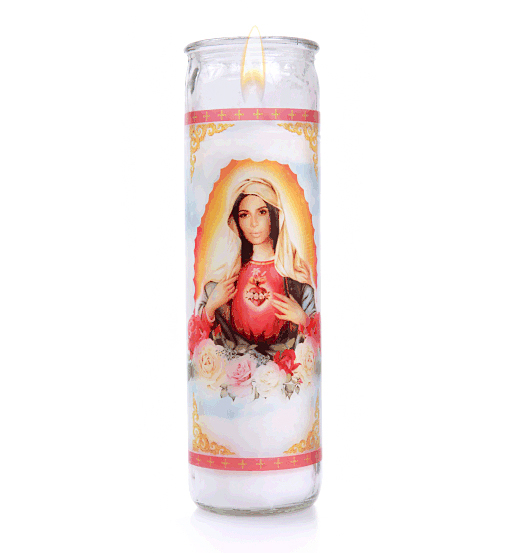 Disgusting! As a Christian I’m truly offended. If you knew who the Virgin MARY was and represented you would actually be embarrassed.

Funny but you are not virgin from anywhere baby??????

Kim Kardashian as the Virgin Mary……. is just as horrible as Kendall’s Pepsi ad…. what’s wrong with y’all, y’all that money hungry?

So now you’re the Virgin Mary? Another bad decision, from diet Flu ? to Virgin Mary ??

I’m Catholic we use candles with images of saints, the Virgin Mary etc. For prayer for healing and other reasons. #disapointed #disrepectful

Earlier this month, Kardashian unveiled a $98 “butt pool float” — a pool toy shaped exactly like, well, her derriere. Another, less NSFW design featured on her site: a black speech bubble floatie with the word “LIT” across the top that also retails for $98.