What could make the scandalous Fifty Shades of Grey trailer even more wild? The inclusion of terrifying horror movie characters, of course!

Jimmy Fallon decided to amp up the first preview for the upcoming Fifty Shades of Grey movie, which made its long-awaited debut last week, by adding a few scary pictures in random places. The Tonight Show host, 39, then recruited his late-night band, The Roots, to view his extra-special clip.

“Everybody is still talking about this Fifty Shades of Grey trailer that just came out,” Fallon explained on the episode that aired Tuesday, July 29. “Millions of hits on YouTube. With all the hype, we wanted to see what The Roots thought of it.” 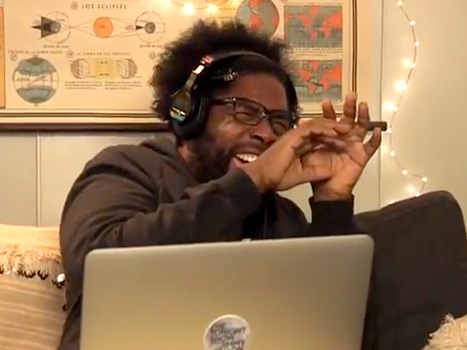 “We asked each of them to watch it so we could tape their reactions,” the funnyman continued. “But here’s the catch: You know those scary faces that sometimes can pop up in YouTube videos? We added one of those to the trailer.”

A few members of the acclaimed band slipped on headphones and grabbed laptop computers to watch what they thought was simply the S&M-inspired first look at Fifty Shades. They were in for a surprise, however, when the footage panned from Dakota Johnson and Jamie Dornan to said “scary faces.”

Watch the musicians’ priceless reactions in the video above!