Ashton Kutcher: Demi Moore's Miscarriage Was 'Really, Really Painful'
Pamela Anderson's Biggest Revelations From New Book, Netflix Documentary
Pedro Pascal Through the Years: From 'Game of Thrones' to 'The Last of Us'
END_OF_DOCUMENT_TOKEN_TO_BE_REPLACED

Still going strong. Katie Holmes is absolutely “smitten” with boyfriend Jamie Foxx despite his eyebrow-raising behavior with other women, a source exclusively reveals to Us Weekly.

Katie Holmes and Jamie Foxx: A Timeline of Their Relationship

“She has fun with him when they are together,” the source explained in the newest issue of Us, on newsstands now. “It’s a relationship that works for her.”

Their romance isn’t without issues, however. The Dawson’s Creek alum, 39, was reportedly not pleased after Foxx, 50, was spotted getting close to his ex Kristin Grannis on July 4, when they watched fireworks together in Malibu. At the time, Holmes was in Ireland with her 12-year-old daughter, Suri, whom she shares with ex-husband Tom Cruise. To make matters worse, the Django Unchained star was seen partying it up — and getting handsy — in Miami with multiple women just days earlier.

“No one understands why Katie loves a man who can’t seem to commit or why he’s publicly humiliating her like this,” the source continued. “Everyone just wants her to take care of herself and to be happy. But she won’t let go of Jamie.”

She has her reasons, one of them being that the Batman Begins actress has found happiness in the In Living Color alum, who, thanks to his “mesmerizing and entertaining” nature, never fails to make her laugh. 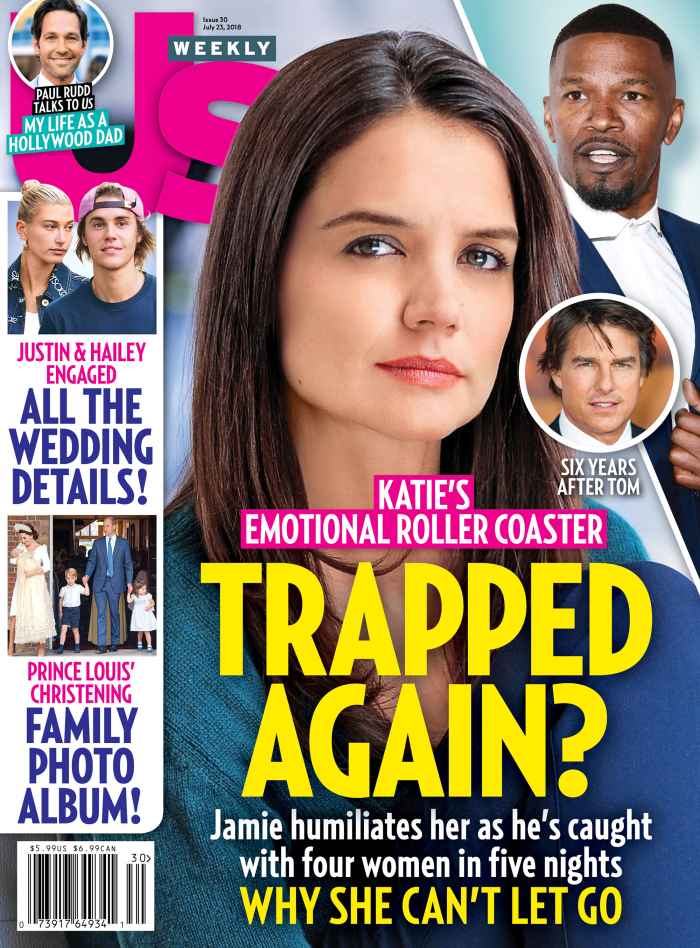 And despite living on opposite coasts — with Holmes residing in New York City and Foxx in Los Angeles — the private couple actually “see each other more than people would think.”

“When Katie and Jamie are together, it works,” the source adds. “It’s weird, but it’s what works for them.”

For more on Holmes and Foxx’s relationship, pick up the newest issue of Us Weekly, on newsstands now!

Ashton Kutcher: Demi Moore's Miscarriage Was 'Really, Really Painful'
Pamela Anderson's Biggest Revelations From New Book, Netflix Documentary
Pedro Pascal Through the Years: From 'Game of Thrones' to 'The Last of Us'
END_OF_DOCUMENT_TOKEN_TO_BE_REPLACED