Uh, is it getting hot in here? Fifty Shades of Grey released a very steamy second trailer for the movie on Thursday, Nov. 13, during the latest episode of ABC’s Scandal. The two-and-a-half minute clip is even racier than the first, and offers a tantalizing glimpse at what’s to come between Christian Grey (Jamie Dornan) and Anastasia Steele (Dakota Johnson).

Set to Beyonce‘s song “Haunted,” the preview shows a frequently shirtless Dornan, 32, pinning Johnson against the wall of elevator, undressing her, and kissing her bare thigh — among other things. (There’s also a sexy sequence involving Mr. Grey and an ice cube that’s sure to give you goosebumps.) 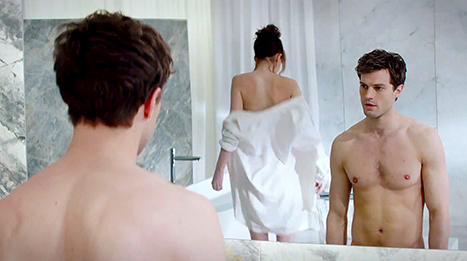 “My tastes are very singular,” he teases. “You wouldn’t understand.”

“Enlighten me then,” Johnson, 25, propositions him.

PHOTOS: The most romantic movies ever

Watch the second sexy trailer above!