Your Horoscope: What’s in Store for You This Week!
‘Good Morning America’ Anchor Amy Robach Has Worked Hard For Her Money: Find Out Her Net Worth
Rob Kardashian’s Weight Loss Photos Through the Years Will Have You Rooting for Him
END_OF_DOCUMENT_TOKEN_TO_BE_REPLACED

So much for their happy family reunion!

Melissa Gorga and sister-in-law Teresa Giudice finally reached a detente in their epic family feud at long last, but on Sunday’s season 4 finale of The Real Housewives of New Jersey, everything fell apart when Gorga learned Giudice conspired with pal Kim DePaola to make it seem like Gorga was once a stripper.

Tensions reached a boil when Giudice — attempting to play the comforting sister-in-law — pulled Gorga aside at the Posche fashion show to ask just how she knew Angelo Vrohidis, the man who alleged Gorga once danced for him at Elizabeth, N.J. jiggle joint Lookers Gentlemen’s Club. (Gorga — as she explained to Giudice — was simply a bartender at the venue, and only for one week.)

PHOTOS: Before they were Real Housewives

“I never believed Melissa was a stripper, but it just seems like a coinkie-dink.” Giudice said later, after Gorga swore on her children she had never danced.

All hell broke loose when Vrohidis — a former manager at Lookers — was overheard telling a fellow patron about Giudice and DePaola’s plan to “blow the whistle on” Gorga. Later, Jacqueline Laurita even received text messages about the plan, said to have been two weeks in the making.”I can’t help but think Kim D had a huge part in this,” fumed Gorga when she realized she’d been had. “With Kim D setting me up, does Teresa mean to tell me she had no idea this was going on? I’m sorry, it’s not adding up.”

VIDEO: Melissa opens up to Us about Teresa's latest insults

As Gorga, 33, fumed, Giudice, 40, maintained her innocence, insisting that “my conscience is clear.” Once Giudice’s brother, Joe Gorga, became involved at the urging of wife Melissa, he vowed never to speak to his sister again, sending her a text after the fashion show reading “you are dead to me.” 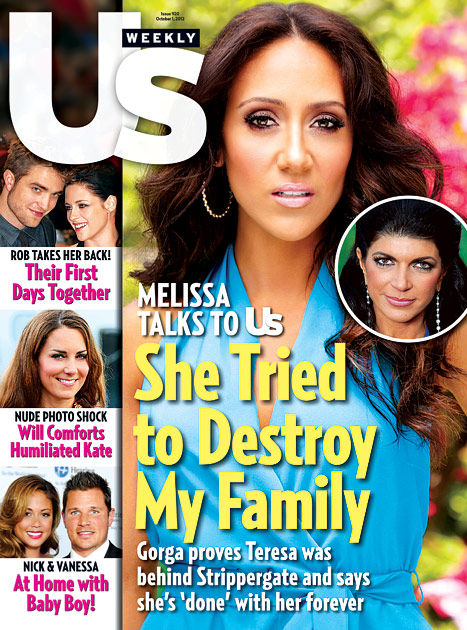 “It’s so hard for me to put myself in Teresa’s shoes because I’d never try to hurt anybody,” Gorga tells the new issue of Us Weekly. “Maybe she thought my husband didn’t know that I worked there. Maybe she was trying to hurt my marriage. Maybe it will make her happy when everyone is as miserable is Teresa is. That’s a sick individual. It’s even sicker that she would put this on national TV.”

VIDEO: Joe Gorga says his marriage to Melissa is stronger than ever

Continued an emotional Gorga: “This is one of the worst betrayals of my life.”

Your Horoscope: What’s in Store for You This Week!
‘Good Morning America’ Anchor Amy Robach Has Worked Hard For Her Money: Find Out Her Net Worth
Rob Kardashian’s Weight Loss Photos Through the Years Will Have You Rooting for Him
END_OF_DOCUMENT_TOKEN_TO_BE_REPLACED