Not a good look.

The Facebook page for Operation Harpoon, an organization that describes themselves as a #SkinnyAppreciation feed, went viral on Wednesday, Aug. 19, for the Photoshopped images of celebs, plus-size models, and even non-famous men and women that are manipulated (without permission) to look skinnier. And now, plus-size model Tess Holliday, who is featured regularly, is speaking out against the controversial page. 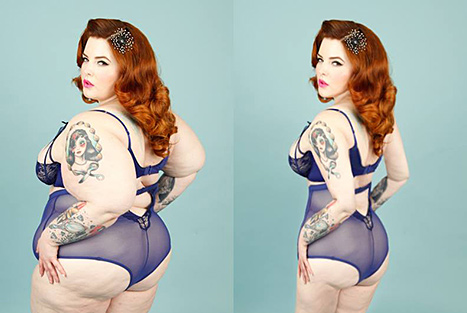 “I think [the Facebook page] is pathetic, and their Photoshop skills are seriously lacking,” Holliday tells Us Weekly. In one side-by-side image, Holliday—wearing a sexy blue lingerie number is altered beyond recognition, her tattoos are garbled and her body is extremely disproportionate.

PHOTOS: Supermodels: then and now

“I actually laughed out loud [when I saw the pictures of myself]. The versions of me smaller aren’t even anatomically correct and my limbs are all stretched out like I’m made of Play-Doh.” she tells Us, adding, “It’s ridiculous.” 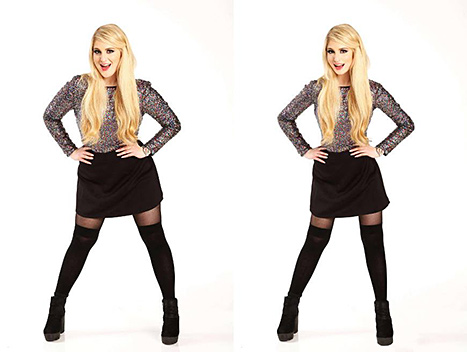 Other celebrities who have appeared on the site include Melissa McCarthy, Meghan Trainor, and fellow plus-size model, Ashley Graham. Accompanying each altered image are the hashtags #SkinnyAcceptance and #ThinnerBeauty and snarky comments like, “Meghan Trainor might be a lot more popular if she was what the industry wanted her to be! Not all about that Bass [sic] huh?”

PHOTOS: Stars who fight back on social media

Although the Facebook page seems designed to elicit outrage, Holliday, for one, isn’t spending too much time thinking about them. “People that do this kind of stuff will never get it. They need to work on their own issues and why they have so much hate and anger first,” she tells Us. “It’s disgusting, yes, but I can’t even take them seriously, and no one else should. Honestly, to me, it’s a joke. To Ashley Graham, Melissa McCarthy, and the other poor people who’ve been mangled by these morons, we’ve never looked worse.”

Update: The Facebook and Instagram pages for Project Harpoon and Operation Harpoon have since been flagged and taken down, due to online backlash, reports the Huffington Post.

What do you think of Project Harpoon? Tweet with @UsWeekly using the hashtag #stylebyUs!