Prepare to swoon. John Cena put a lot of thought into the stunning diamond engagement ring he proposed to Nikki Bella with. In a short — and seriously sweet — YouTube video posted on the Bella Twins’ page on Tuesday, April 4, the wrestling pro revealed he custom-designed the sparkler.

11 Dreamy but Affordable Engagement Rings Under $5,000 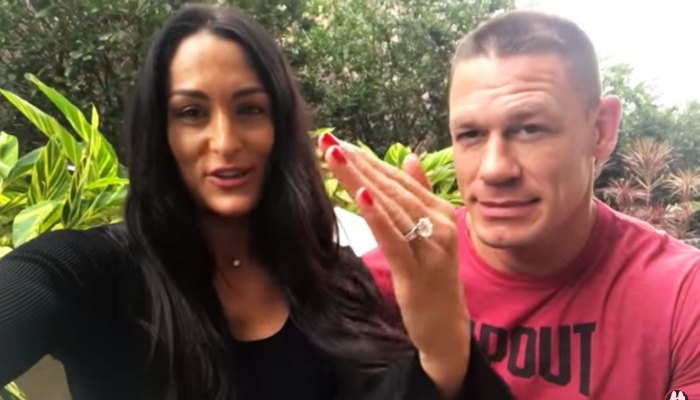 “I didn’t just walk into a place and say, ‘Please just give me a ring.’ … I’ve been thinking about this for a long time … so I went to the good folks at Tiffany’s and had them construct a ring,” Cena, 39, said in the clip while showing off the ring on Nikki’s hand to the camera.

“The ring represents our entire relationship up until this point. If you look at the stones on the side, there are four individual stones on each side. One side represents me and one side represents her and the four means the years we’ve been together to come to center point. … The center point is a 4.5 carat round brilliant cut Tiffany diamond that represents the four and a half years we took to get right here,” the Trainwreck actor added. “As with everything that we do for each other, there’s always meaning behind it.”

As previously reported by Us, the athlete popped the question to his longtime love, 33, during WrestleMania 33 on Sunday, April 2. “I have been waiting so long to ask you this,” he said with the ring box in hand during the emotional moment. “Stephanie Nicole Garcia-Colace, will you marry me?”

Diamond expert Michael O’Connor previously told Stylish, “the value of this dazzler [appears to be] around $85,000.”

Relive their romantic moment in the video above.