Back off! Amanda Stanton addressed mom shamers on Instagram on Sunday, June 11, after people on social media commented about her parenting.

The Bachelor After the Final Rose: Broken Engagements and More!

“I don’t normally like to address the trolls / mom shamers … but it’s so out of control!” Stanton — who is mom of daughters Kinsley, 4, and Charlie, 3 — shared via her Instagram story. “I’d like to take a moment to clarify first of all that my kids DO have a father that is part of their life. They spend time with him too. So if you see a photo of me without my kids one weekend and comment something like ‘mother of the year’ or ‘wow shouldn’t she be with her kids?’ Well, there’s a VERY good chance that I can’t be with them because they’re with their dad.” 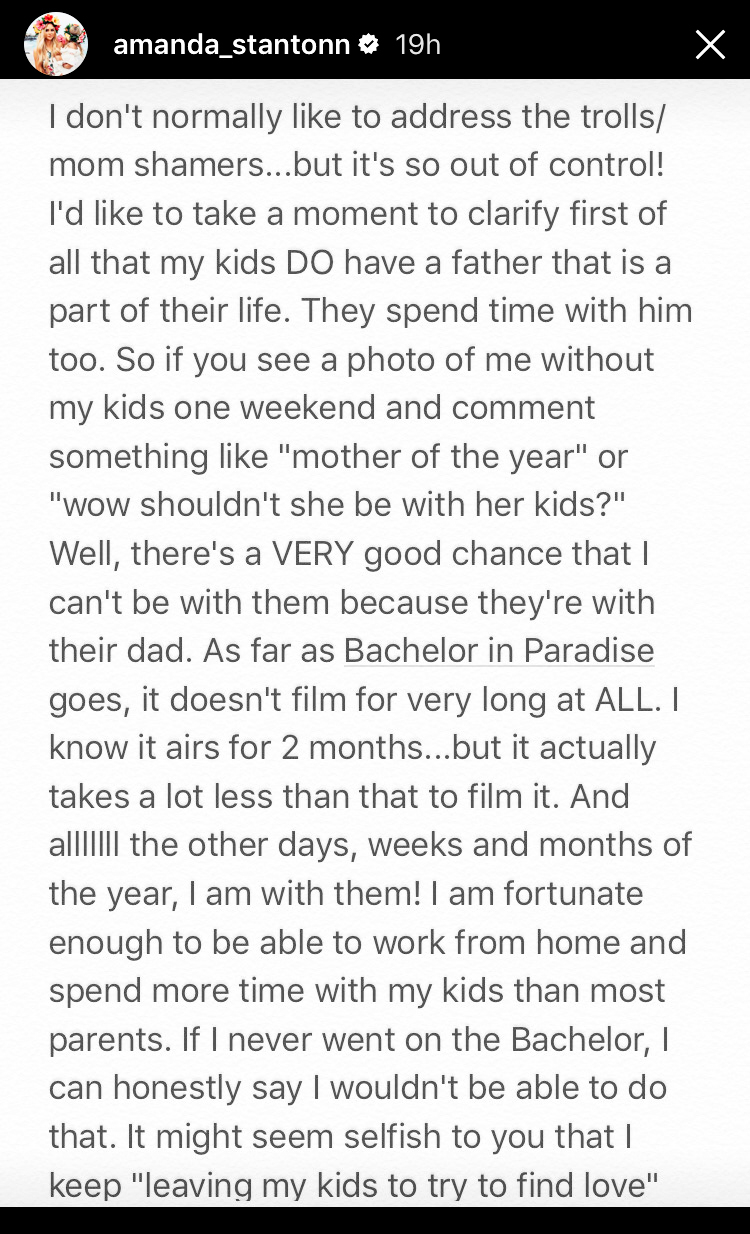 Stanton, who competed on season 20 of The Bachelor, went on to defend herself for opting to go on season 4 of Bachelor in Paradise.

“As far as Bachelor in Paradise goes, it doesn’t film for very long at ALL,” she wrote. “I know it airs for 2 months … but it actually takes a lot less than that to film it.”

“I am fortunate enough to be able to work from home and spend more time with my kids than most parents,” she continued, explaining that when she is filming, her kids stay with their dad or grandparents. “I understand that most parents don’t go on reality TV shows … but everyone’s lives are different. … My kids are my entire world. I am doing my best to give them a great life.”

As previously reported, Stanton left Mexico, along with the rest of the season 4 cast of BIP, after filming was abruptly suspended following an alleged incident of sexual misconduct between contestants Corinne Olympios and DeMario Jackson. Warner Bros. has since issued a statement revealing they’re investigating the incident.

Celeb Moms Who Disappeared From Hollywood After Having Kids

“The cast is basically in the dark about what happened and they are not being told anything,” a source previously told Us on Monday, June 12. “They were all excited for this season and to get to know each other. They were all getting along with each other well.”