This One-Piece Swimsuit Is So Flattering, You’ll Never Want to Take it Off
Jennifer Lopez’s 4th of July Swimsuit Style Can Be Yours For Under $30
These Denim Shorts From Amazon Are a Hit for All Body Types
END_OF_DOCUMENT_TOKEN_TO_BE_REPLACED

She’s quite the beauty! Christina Aguilera stopped by Live! With Kelly and Michael in Disneyland on Monday, May 18, where she shared brand-new photos of her 9-month-old daughter Summer Rain, who visited the amusement park in Anaheim, Calif., for the first time ever this weekend.

“I have a 7-year-old son,” Aguilera told the show hosts of her son Max, whom she shares with her ex-husband Jordan Bratman. “And it was my daughter’s first Disney trip yesterday, so it was super special.”

Producers flashed a photo of baby Summer — Aguilera’s daughter with fiancé Matt Rutler — beaming in a stroller beside her mom, who sported a pair of chic polka-dot Minnie Mouse ears. “She was so happy,” the pop sensation revealed. “She’s a total like [people-person]… She loves watching people, so this is the place to come. If you are not shy, and you want to see people… I mean, she loved it.”

Aguilera, 34, then went into depth about the differences between her daughter and son. “He grew up on Disney,” the All-New Mickey Mouse Club alum noted, adding that little Max was more introverted than his sibling. “I have to say my 1-year-old was a little bit more of a trooper,” Aguilera said of Summer in Disneyland.

Despite their personality differences, Summer could not be more enamored with her big brother, Aguilera said Monday. “Oh my God, they laugh so much together. She wants to do everything like him,” the star explained. “If he starts laughing about something, she’s like, ‘What’d I miss?!'”

The family — including Aguilera, Max, Summer, and Rutler — could not be happier. The Voice coach, though eliminated, said Monday that she was looking forward to spending time at home this summer. “When you’re working so much on The Voice, just being at home is a gift from God,” Aguilera reflected. “Being at home with the kids in my sweatpants, I’m good.” 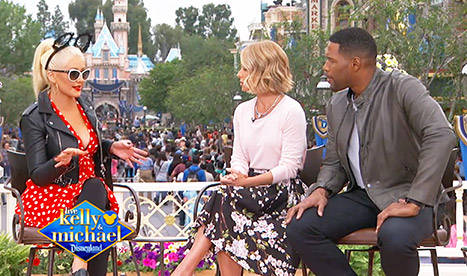 This One-Piece Swimsuit Is So Flattering, You’ll Never Want to Take it Off
Jennifer Lopez’s 4th of July Swimsuit Style Can Be Yours For Under $30
These Denim Shorts From Amazon Are a Hit for All Body Types
END_OF_DOCUMENT_TOKEN_TO_BE_REPLACED
Close widget