Big Brother's Alyssa Snider and Kyle Capener Split
Jennifer Garner Has 'No Desire' to ‘Slow Things Down’ With Love John Miller
‘Seinfeld’ Cast: Where Are They Now?
END_OF_DOCUMENT_TOKEN_TO_BE_REPLACED

Ivanka Trump is going to be a huge deal in Washington. While a federal anti-nepotism law could prevent the 35-year-old from holding an official White House position after her father, Donald, assumes his role as the 45th president of the United States on January 20, “unofficially,” an Ivanka source reveals in the new issue of Us Weekly, “she will be Donald’s closest adviser.”

Over the course of her father’s successful campaign, the husky-voiced Seventeen cover model turned Trump Organization executive evolved into his most trusted consultant. “He looks to Ivanka for advice and consultation on almost everything,” notes a close Ivanka insider.

That relationship will continue, as the real estate tycoon, 70, assumes his role as commander in chief. While brother Donald Jr., 39, and Eric, 33, remain in New York City to run the Trump business empire, Ivanka is moving to the nation’s capital, where her husband, Jared Kushner, 36, will act as one of Donald’s senior advisers. 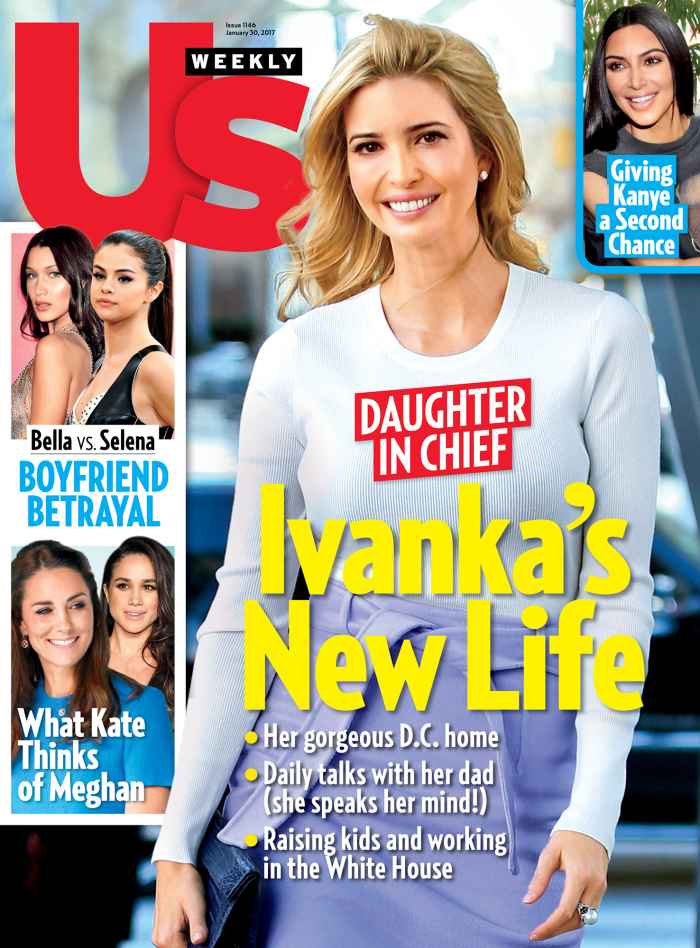 The mom of Arabella, 5, Joseph, 3, and Theodore, 9 months, could take a similar role. She announced January 11 that she’s taking a leave of absence from both the Trump Organization and her eponymous apparel and accessories firm. “Donald made the best deal for his daughter,” family friend and Avenue magazine columnist R. Couri Hay tells Us. “The boys get the multibillion-dollar company, and Ivanka gets Washington.”

Along with providing advice, the University of Pennyslvania grad could act as her dad’s buffer. Insiders say the polished businesswoman has a knack for calming her father, infamous for his hot temper and middle-of-the-night Twitter rants. “She balances him out,” explains an Ivanka source. “She learned to keep her mouth shut and just let him get it off his chest. She then rationally explains other points of view.”

As first daughter, she’ll push a female-centric agenda. “I’m a huge advocate for women and women’s issues, like child care,” Ivanka, whose website IvankaTrump.com includes a series of profiles called #WomenWhoWork, told Harper’s Bazaar in August. She’s already helped her dad craft a policy proposal that seeks to provide paid maternity leave and make child care expenses tax deductible. As she explains to the mag, “In half the country, the cost of child care exceeds the cost of housing.”

With stepmother Melania choosing to reside at the family’s NYC triplex penthouse until half brother Barron, 10, finishes the school year, Ivanka will also assume some first-lady responsibilities. “She will be at State functions,” Hay tells Us. “I think Melania is very happy to share those responsibilities with Ivanka.”

For more on Ivanka’s new life — including how her children are adjusting — pick up the new issue of Us Weekly, on stands now!

Big Brother's Alyssa Snider and Kyle Capener Split
Jennifer Garner Has 'No Desire' to ‘Slow Things Down’ With Love John Miller
‘Seinfeld’ Cast: Where Are They Now?
END_OF_DOCUMENT_TOKEN_TO_BE_REPLACED