File this under "Unexpected Responses."

Oops! Jeopardy! contestant Becky Sullivan made host Alex Trebek chuckle with her Final Jeopardy answer on Friday, Oct. 23 — but the effects of her liberal-bashing response didn’t end there.

The NPR producer was facing off against fellow contestant Sean Anderson on Friday’s show when she unwittingly insulted an entire demographic of left-leaning people.

“The flower pictured here is called this, also a disparaging term for people on the political left,” the Final Jeopardy question read. 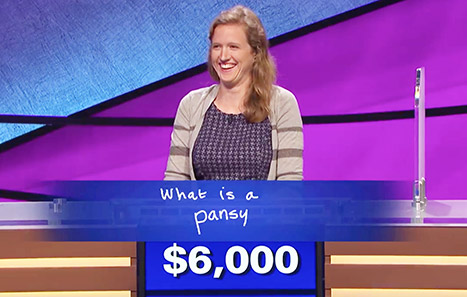 Sullivan appeared to be unsure of her answer when the allotted 30 seconds were up, prompting Trebek to comment, “I have a feeling that you may have found a way to insult liberals in this country.”

Sure enough, Sullivan’s answer, “pansy,” caused the audience — and Trebek — to laugh, but she lost her earnings from the night: $6,000.

“Yep, you found a way to insult liberals in this country,”  Trebek confirmed.

Sullivan took to Twitter to live-tweet as the episode aired, noting, “OK here’s the deal with pansy: I actually didn’t know bleeding heart was a flower. I just put the only flower I knew that was also an insult.”

“Second place still gets me two grand though,” she added. “Worth it. Sean did great.”