As Kim Kardashian declared, it’s officially ThursYe! Kanye West’s highly anticipated Yeezy 3 collection debuted at Madison Square Garden in New York City on Thursday, February 11, and we had (basically) a front row seat. See below for everything that went down, thanks to exclusive live updates from Us Weekly’s Entertainment Director, Ian Drew, who was reporting from inside the extravaganza.

5:48 p.m. EST: “Kanye says he has to hand the IPod over and go backstage with his wife and kids. He thanks us for letting him ‘spill his gut out.’ Kanye also thanks Kirk Franklin, Rihanna and others on the album. He says he’s going to be mad if he goes backstage and forgets any names.”

5:39 p.m. EST: “He promised Adidas is going to produce more Air Yeezy’s and at lower prices. He says he told Anna backstage before the show his dream is to be the creative director of Hermes for a couple of years as ‘I just want to bring as much beauty to the world as possible. I’m only 38 years old.”

5:36 P.M. EST: “Kanye says, ‘This is really a gospel album … and this is something that couldn’t have happened without God holding me down … it’s been a struggle. I feel so happy, I feel so much joy to create music without people s—ting on me … and I thank my wife and family for supporting me.’ He thanks the crowd for buying his merchandise, music and products and for supporting him to speak his mind. And then … before he goes, he wants to show us a video game, saying the idea is his mom traveling through the gates of heaven. A video then plays of Donda flying through heaven. The game is called Only One: The Game. 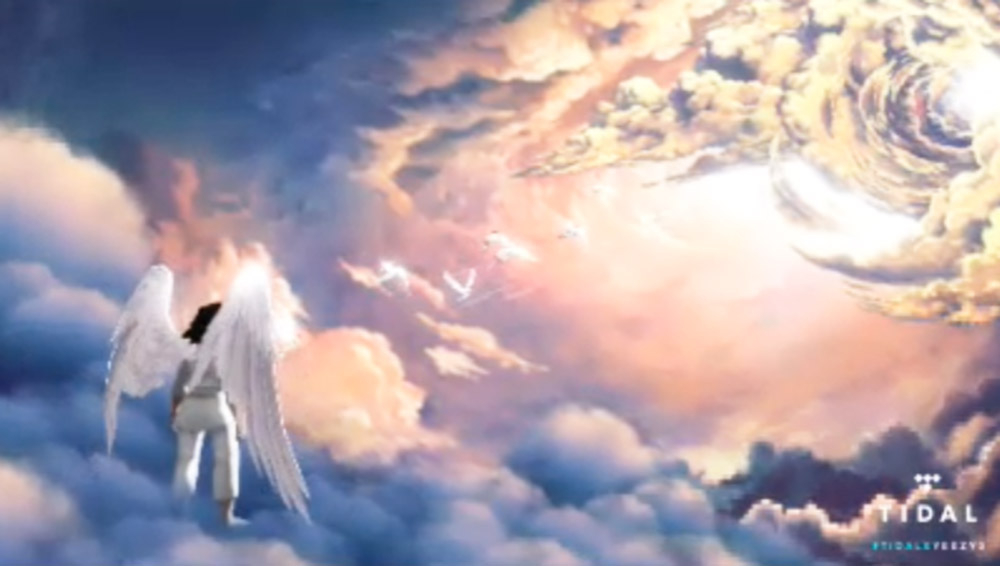 ‘That’s not easy to do. y’all act like shit is regular … you don’t understand I meet with everybody in San Fran and they dis the f—k out of me. I want to make a game and say f—k you. That shit was hard to do,

Man.’ Kanye then plays the video of his mom again.” 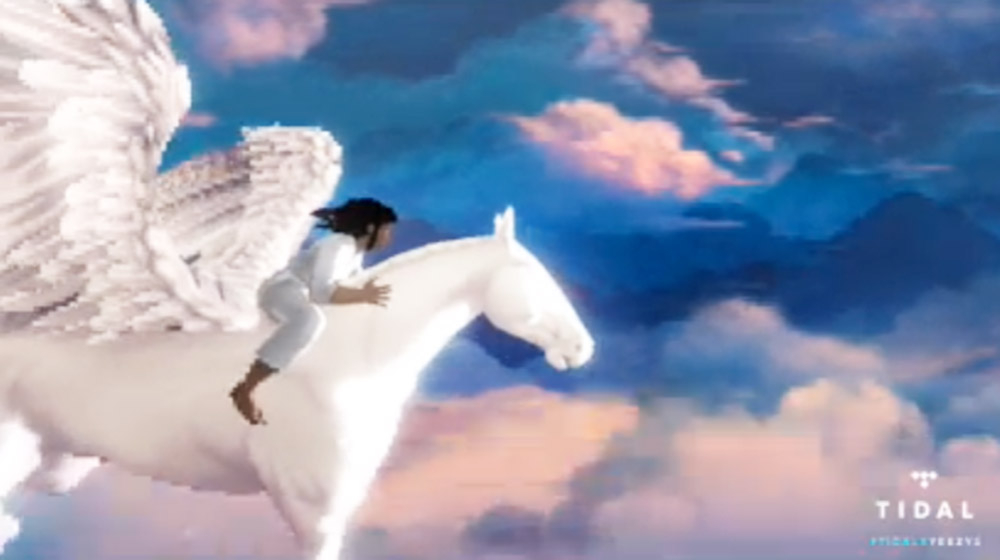 5:28 p.m. EST: “Kanye just announced Jay Z is in the building and thanks Tyga for supporting the event and being there.”

5:24 p.m. EST: “The Kardashians rise as Doug wants to play a new song. Carine Roitfeld boogies and Kim and Khloe plan their exit. Caitlyn also dances in her seat. They seem torn between whether to leave or keep partying. Lamar is trying to point the way to the best exit.” 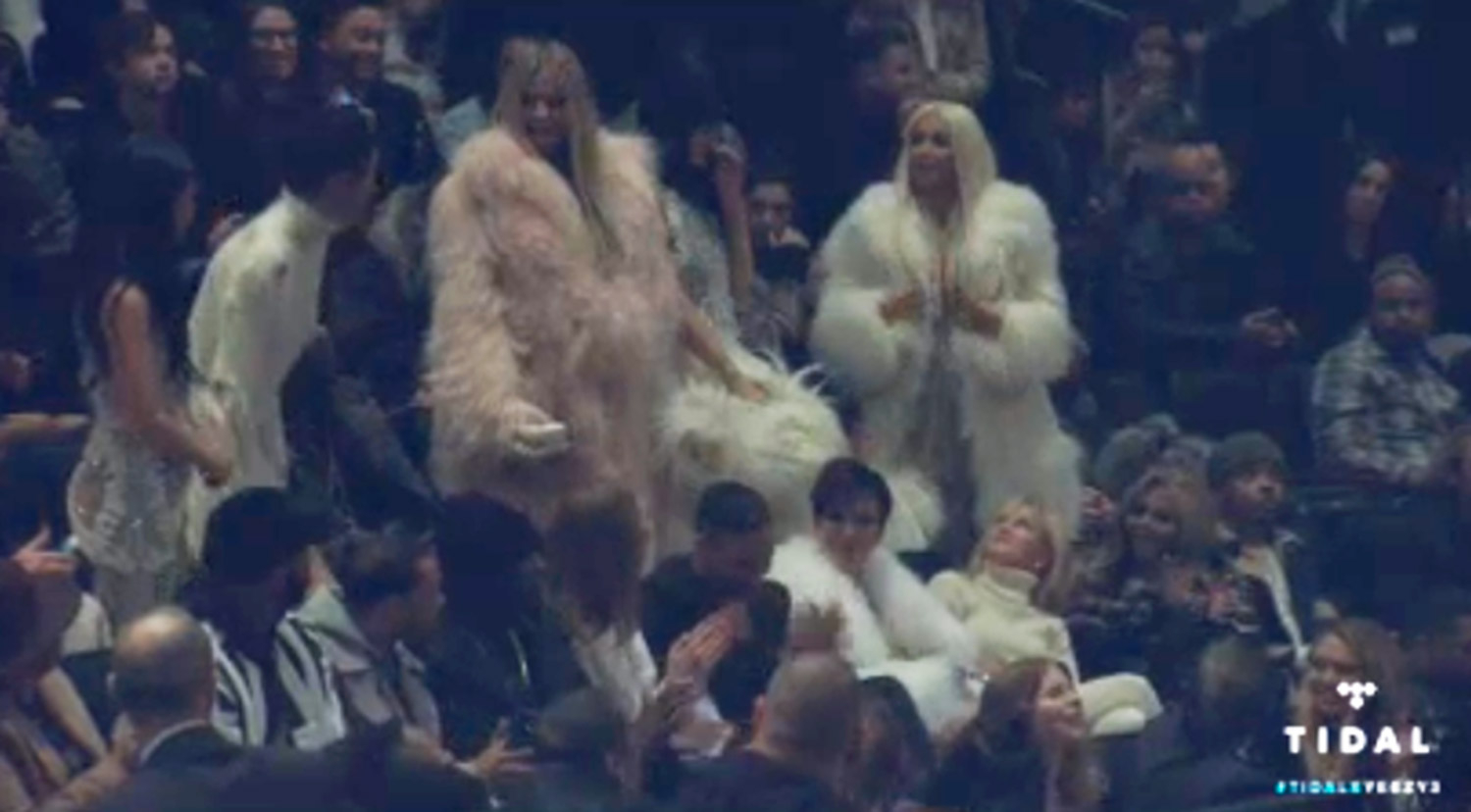 5:20 p.m. EST: “Kanye is thanking the fashion crowd and thanks Carine Roitfeld, the former editor-in-chief of Vogue Paris, for putting Kim on her first fashion cover. Now he’s thanking Olivier from Balmain.

5:13 p.m. EST: “Throbbing waves of bass shake the arena as the models put their fists down during this spooky last number, ‘Wolves.'”

5:00 p.m. EST: “As Kanye pumps another complete banger called ‘Highlights,’ the models remain standing there frozen — except the iconic black supermodels, who leave the arena floor. (Alek Wek is also one of them.) The song is a reggae-flavored throbber that had Kylie and Kim singing along. Kourtney is putting her hands on Lamar’s shoulder as they move their heads and sing along with Kendall, rapping all the words. Lamar has a big smile on his face.”

4:56 p.m. EST: “Veronica Webb walked out during the track ‘Famous’ in a fur coat and everybody cheered. Kylie is jumping up and down and singing to Kourtney and Kendall. Khloe joined them and shouted the lyrics, ‘I made that bitch famous!’ Kendall, Kylie, Khloe and Kourtney are all dancing as Kim gets up and joins them. It’s a Kardashain dance party!”

4:41 p.m. EST: “Kanye is playing the first song off the album on full blast — ‘Ultralight Bling’ — bass is shaking the entire arena as a gospel voice wails. 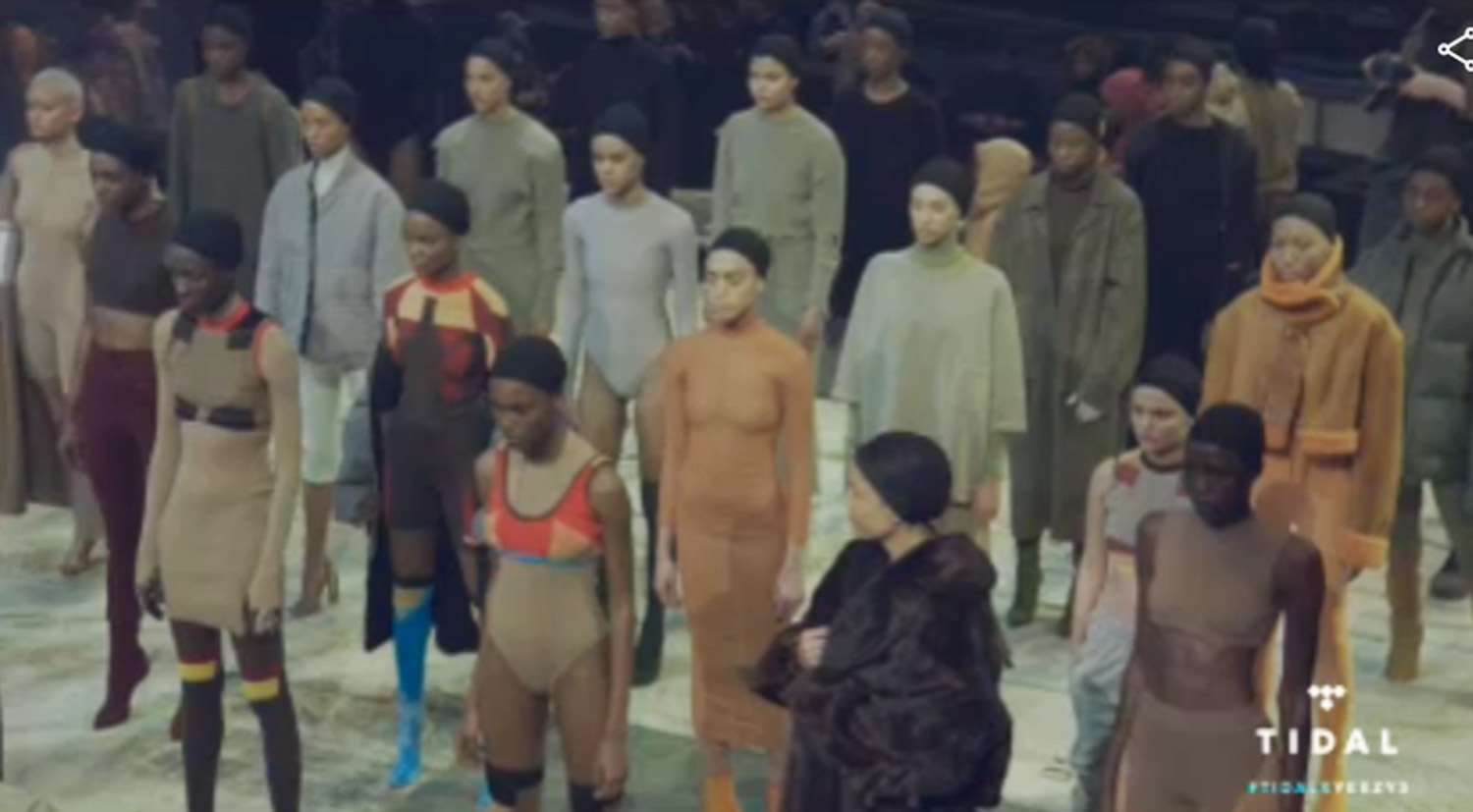 4:37 p.m. EST: “The Kardashians are sitting a row next to Anna, posing for photos in white and diamonds. Caitlin is with Kris. When Kourtney walked in, she was holding North West!”

4:34 p.m. EST: “All the Kardashians just walked in. Kim is blonde! They are wearing white fur coats. Lamar walked in with Kanye and Kanye walked him to his seat — everyone is cheering!” 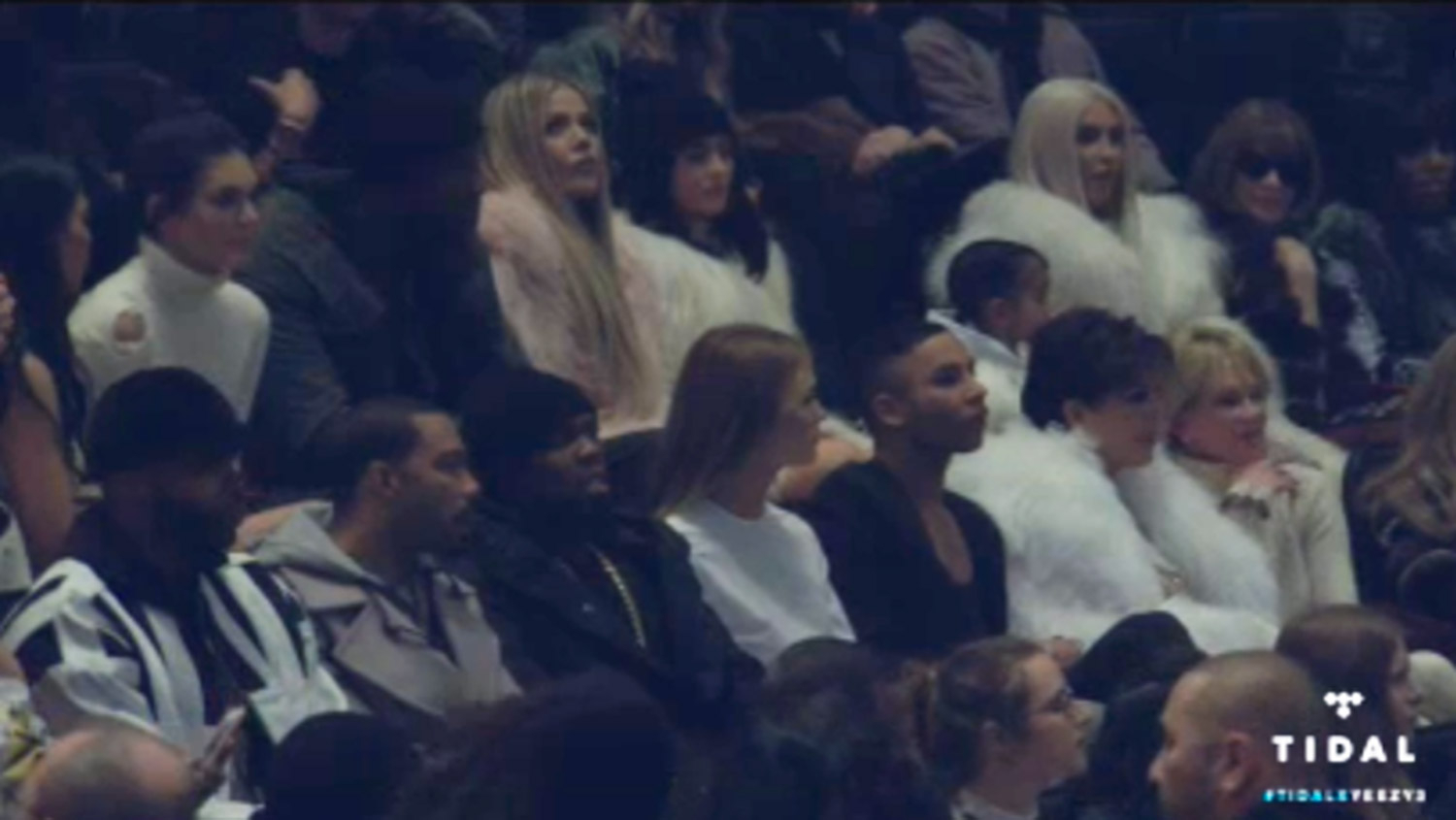 4:24 p.m. EST: “Jaden Smith just walked in holding hands with his girlfriend and sits down before he realizes he’s in the wrong section. He slaps a friend’s hand and says, ‘What’s up, bro? Are you good?’ before rushing off.

Female models in neutral-colored body stockings with neon trim file into the ginormous parachute bubble. It’s getting crowded in there!”

You know your seats for #YeezySeason3 are good when you’re in front of @kimkardashian @krisjenner @khloekardashian @lilkimthequeenbee @kourtneykardash It was good to see @lamarodom doing well.

4:10 p.m. EST: “Stagehands are starting to practice making waves with the parachute (get it?) as shirtless men file under it. Austin Mahone just breezes past me in all black and sits at the end of my row. He’s snapping pics on his iPhone. Also spotted: DJ Cassidy in one of the many long fur coats I’ve spotted here on this frigid day.”

3:59 p.m. EST: “The arena is staring to fill with smoke from smoke machines under the parachutes, but the arena is still mostly empty despite the 4 p.m. showtime. I’m told it will definitely start almost an hour late as that’s how Yeezy rolls. I’m also told Kanye has hired one thousand models for the show.”

3:40 p.m. EST: “Just got in and the arena is basically empty. Kanye and his team are setting up under huge parachute tarps in the middle of the arena. Tons of models and people under the parachute material milling about, but the seats in the arena are mostly empty. Mobs of people outside are trying to get in though, most of them in Kanye-style bomber jackets of various colors and Adidas Air Yeezy-style sneakers and tight jeans.”

As Kim Kardashian declared, it’s officially ThursYe! Kanye West’s highly anticipated Yeezy 3 collection is set to be debuted at Madison Square Garden in New York City on Thursday, February 11, and we’ve got a front row seat. Check back here at 4 p.m. EST to watch the livestream and for live updates from Us Weekly’s Entertainment Director, Ian Drew, reporting from inside the extravaganza.

West is also scheduled to premiere his upcoming album, The Life of Pablo, at the event and the sold-out guest list includes everyone from his wife, Kardashian, to A$AP Rocky and wrestling pros including Ric Flair. Did we mention the shindig also required a casting call for 1,200 extras and will feature a performance by contemporary artist Vanessa Beecroft?

Over the past few days West has teased fans with images of his latest collection, which appears to include everything from plastic shoes to waterproof Yeezy boots, better known as 1050s.

The YeezySupply website landing page has been updated from a countdown clock and an image of a woman with an ankle monitor on to a video of inside fittings, so we can only imagine what happens from here.

Updates — and likely a lot of spandex and sweatshirts — to come!