Sarah Michelle Gellar Admits Her and Freddie Prinze Jr.’s Parenting ‘Expectations Are a Little Higher Than Most’
Shoppers Say This Is the Softest Cardigan You’ll Ever Own
La Adelita Tequila: The Hottest New Drink in Aspen
END_OF_DOCUMENT_TOKEN_TO_BE_REPLACED

Uh-oh. Lindsay Lohan went on a rant against her fiancé, Russian millionaire Egor Tarabasov, on Twitter and Instagram on Saturday, July 23, as she accused him of cheating and also hinted that she might be pregnant.

The former Mean Girls star, 30, mentioned that there was trouble between them in a Snapchat video on Friday, July 22, saying, “My fiancé’s being really angry at me, but I’m drinking water to get him to come home. Honey, come home, please.” She captioned the video “ET phone home.”

On Saturday she posted a picture on Instagram with her beau that showed his face obscured by scribbles. “He wore black and I wore white…” she wrote, quoting the 1966 Cher song “Bang Bang (My Baby Shot Me Down)” along with three wise monkey emojis and an anchor. “I guess #art is whatever you make of it,” she added.

Lindsay Lohan's Fiancé, Egor Tarabasov: 5 Things We Know About Him

Later that night she shared a picture of the couple on Instagram, writing, “I guess I was the same at 23… S—ty time-it changes at 26/27 @e2505t thanks for not coming home tonight. Fame changes people.”

Shorty afterwards she posted a photo of Tarabasov at a party along with the caption, “Wow thanks #fiance with Russian hooker @dasha_pa5h.” (She was referring to Dasha Pashevkina, whose Instagram profile has since been deleted.)

Then the former child star shared a video of her fiancé partying. “Home? First time in my life-bare with he/ he cheated on me with hooker #meangirls #meanboysu b.”

An hour later she tweeted a picture of herself with a baby bump from her 2009 movie Labor Pains, about a woman who pretends to be pregnant. “Lindsay Lohan labour pains trainer – I am pregnant!!” she wrote. 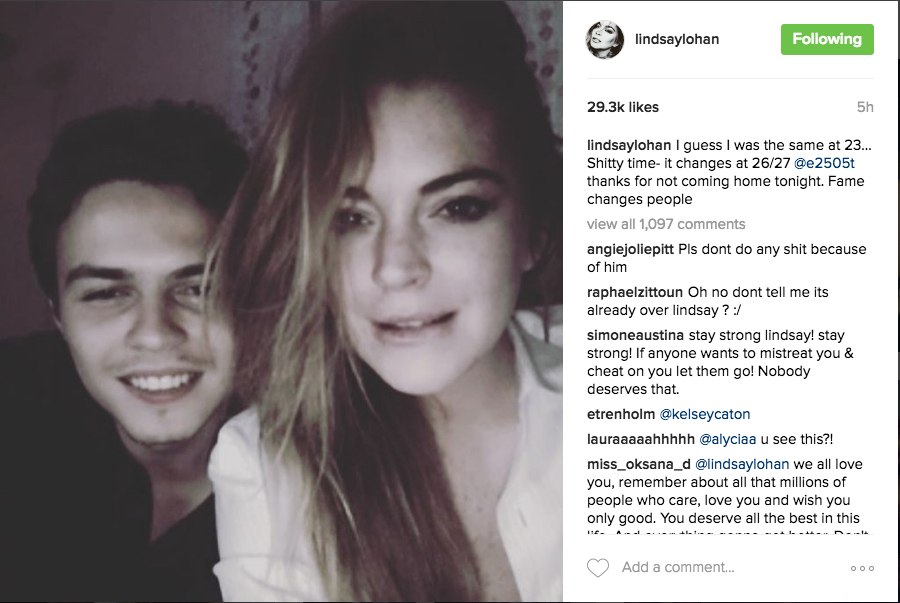 A little while after that, the troubled star Instagrammed and then deleted an email address and U.K. address of the woman she claimed Tarabasov was with, captioning it, “It’s legal if you’re selling yourself and not a Russian from #moscow right my baby @e2505t,” and hashtagging Russian leader Vladimir Putin and U.S. presidential nominee Donald Trump.

As Us Weekly exclusively reported in April, Lohan got engaged to her then-22-year-old boyfriend of eight months, who presented her with a 5-carat emerald ring.

“He loves her, protects her and keeps her out of trouble,” a source told Us at the time.

Sarah Michelle Gellar Admits Her and Freddie Prinze Jr.’s Parenting ‘Expectations Are a Little Higher Than Most’
Shoppers Say This Is the Softest Cardigan You’ll Ever Own
La Adelita Tequila: The Hottest New Drink in Aspen
END_OF_DOCUMENT_TOKEN_TO_BE_REPLACED