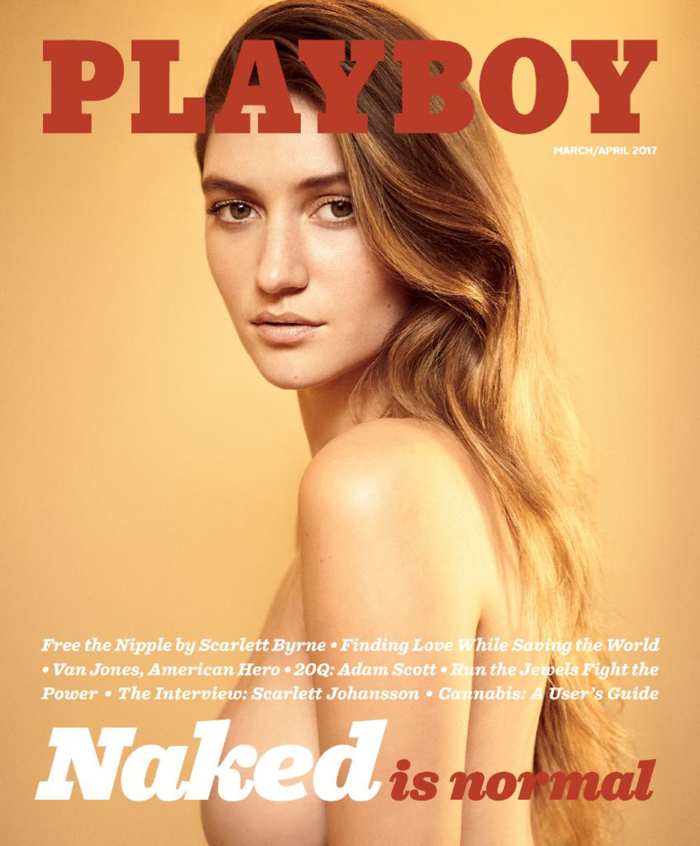 Freeing the nipple, and then some. Playboy magazine is bringing back nudity after instating a short-lived ban. In a post published to the magazine’s website on Monday, February 13, Hugh Hefner’s son, Cooper Hefner, shared the brand’s new philosophy, which includes “reclaiming” what Playboy is all about.

“I’ll be the first to admit that the way in which the magazine portrayed nudity was dated, but removing it entirely was a mistake,” Cooper, who serves as Playboy’s chief creative officer, explained. “Nudity was never the problem because nudity isn’t a problem. Today we’re taking our identity back and reclaiming who we are.”

To that end, the cover of the magazine’s March/April 2017 issue features Elizabeth Elam, who stuns topless. The cover reads “Naked Is Normal” across her bare chest.

“This is a remarkably special moment personally and professionally that I get to share this issue of Playboy magazine with my dad, as well as with readers,” Cooper added. “It is a reflection of how the brand can best connect with my generation and generations to come.”

As previously reported, CEO Scott Flanders told the New York Times in October 2015 that the magazine was removing nudity from its pages due to the freedom of the internet. “You are now one click away from every sex act imaginable for free. And so it’s just passé at this juncture,” he explained at the time, adding that the magazine would, however, still feature scantily clad photos of women.

“Playboy will continue to publish sexy, seductive pictorials of the world’s most beautiful women, including its iconic Playmates, all shot by some of today’s most renowned photographers,” the publication said at the time. “The magazine will also remain committed to its award-winning mix of long-form journalism, interviews and fiction.”

Pamela Anderson was on the cover of the last nude issue, in December 2015.

At the time, Cooper wasn’t on board with the move, telling Business Insider that he “didn’t agree with [this] vision for the company.”

The March/April 2017 issue of Playboy hits newsstands on February 28.