Jessica Simpson 'Felt Like a Call Girl' Amid Secret Affair With Movie Star
John Legend: How My Kids With Chrissy Teigen Adjusted to New Baby
You Love Dolly Parton’s Music, but Have You Read Her Books?
END_OF_DOCUMENT_TOKEN_TO_BE_REPLACED

The most dramatic sex confession ever? The Bachelor season 21 standout Raven Gates discovered a foolproof way to get Nick Viall‘s undivided attention when she informed him during her fantasy-suite date last week that she had never previously experienced an orgasm. This scene subsequently earned her the sympathy of many fans, along with a personalized note from a certain sex-product company.

When Stars Lost Their Virginity

The team at K-Y, a business known for personal lubricants, penned a letter to Gates on Monday, March 6, to offer support, not to mention some professional expertise to help her get where she wants to be going, so to speak. (On the ABC dating series’ March 6 episode, Gates revealed that she enjoyed spending the night with Viall, calling it “really special in more ways than one.”)

“Dear Raven, We were bummed to hear that you didn’t orgasm in your last relationship,” K-Y’s message stated. “It’s definitely not cool when he finishes before you have enough time to get there, so we were glad to see that your first time with Nick was a success.” 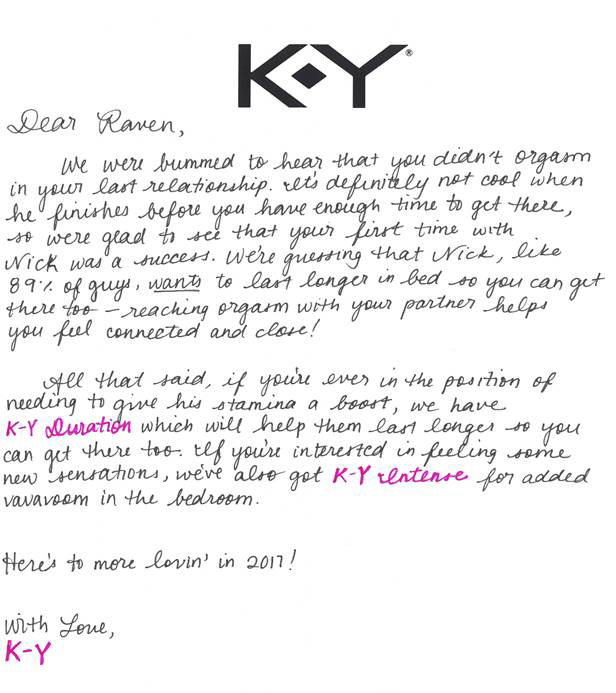 10 Times 'The Bachelor' Made Our Heads Explode!

“We’re guessing that Nick, like 89 percent of guys, wants to last longer in bed so you can get there, too — reaching orgasm with your partner helps you feel connected and close!” the note continued. The company went on to recommend some of their products that are intended to improve upon a couple’s bedroom magic.

As for that pivotal Bachelor moment, a source tells Us Weekly that Viall, 36, was “really excited” when Gates told him she had never previously climaxed. “He’s more in touch with women than guys — he was sort of excited at the prospect of being the guy who could solve this problem,” the insider continues.

And yes, the source adds that Viall and Gates did sleep together and that she did indeed have an orgasm, as implied by the montage of the 25-year-old boutique owner frolicking through the snow on this week’s episode. (Gates and Vanessa Grimaldi are the last two women standing as the show heads into the Monday, March 13, finale.)

Meanwhile, Raven’s ex-boyfriend Hunter Henry previously told Us exclusively that Gates has made “skewed and untrue” remarks about their relationship. “Definitely not true about the whole orgasm thing,” he said.

The Bachelor airs on ABC Mondays at 8 p.m. ET.

Jessica Simpson 'Felt Like a Call Girl' Amid Secret Affair With Movie Star
John Legend: How My Kids With Chrissy Teigen Adjusted to New Baby
You Love Dolly Parton’s Music, but Have You Read Her Books?
END_OF_DOCUMENT_TOKEN_TO_BE_REPLACED