Hours after giving birth to her first child, Amber Rose shared a photo of the bundled up little fella Sebastian “The Bash” Taylor Thomaz being cradled lovingly in his father Wiz Khalifa’s arms.

The picture which would totally be baby book material if people actually still made baby books shows Khalifa (real name: Cameron Jibril Thomaz) looking at his swaddled son as he stands in what appears to be Roseís hospital room. The rapper’s “blessed” tattoo on his left hand is perfectly placed ñ almost captioning the photo.

The new mom actually did provide a caption for the pic, which she tweeted Friday morning. “Best daddy ever…. Up with the baby so Muva can go back to sleep :-)” gushed the 29-year-old model.

Baby Bash arrived on Thursday morning. The couple, who is engaged, made the big announcement on Twitter by wishing their son a “happy birthday” and asking their followers to “welcome this perfect young man into the world.” 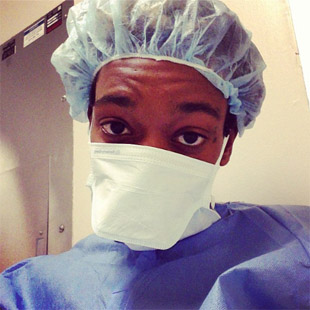 Among those offering congrats? Rihanna and Snoop Dogg.

Their Twitter followers already had a hint that baby was coming. Earlier in the morning, Khalifa posted a photo of himself in scrubs and a surgical mask and wrote, “Daddy time.”

The baby arrived three days before his February 24 due date. And while the couple planned to have a home birth, complete with a “mid wife and a doula at the crib,” as Khalifa detailed on the Big Boy radio show, the photos indicate that they were in some type of a medical facility, not in a house.

So what’s next for the family other than tweeting more photos capturing their bliss? Perhaps treating mommy to a few indulgences that were off limits while she was pregnant.

“My wife sed she juss wants a jacc & coke, a cheesesteak, and a ciggarette 🙂 Thass why im marryin that woman,” Khalifa, 25, wrote after Rose gave birth.

As for that wedding date, the couple who has been together since 2011 and announced their pregnancy at the 2012 VMAs are expected to tie the knot in the months following the arrival of The Bash. However, they have pushed back the date before, so weíll be believe it when they tweet it.

Injured Kelly Osbourne: It Was a Sprained Ankle or My Face in a Public Toilet

Ginnifer Goodwin: I Will Never Have Long Hair Again