Big Brother's Alyssa Snider and Kyle Capener Split
Jennifer Garner Has 'No Desire' to ‘Slow Things Down’ With Love John Miller
‘Seinfeld’ Cast: Where Are They Now?
END_OF_DOCUMENT_TOKEN_TO_BE_REPLACED

Over the course of their 12-year relationship, Brad Pitt and Angelina Jolie engaged in ‘heated, screaming fights’ about how to raise their six children, a source reveals to Us Weekly.

For years, the parents of Maddox, 15, Pax, 12, Zahara, 11, Shiloh, 10, and 8-year-old twins Knox and Vivienne, shuttled between their 1,000-acre estate, Château Miraval, in France; a compound in L.A.’s Los Feliz neighborhood; a mansion in New Orleans’ French Quarter; a New York City penthouse; and wherever the actors happened to be working. As Jolie explained to NBC News in 2011, “I’m trying to raise [the children] to … really live a truly global [life].” 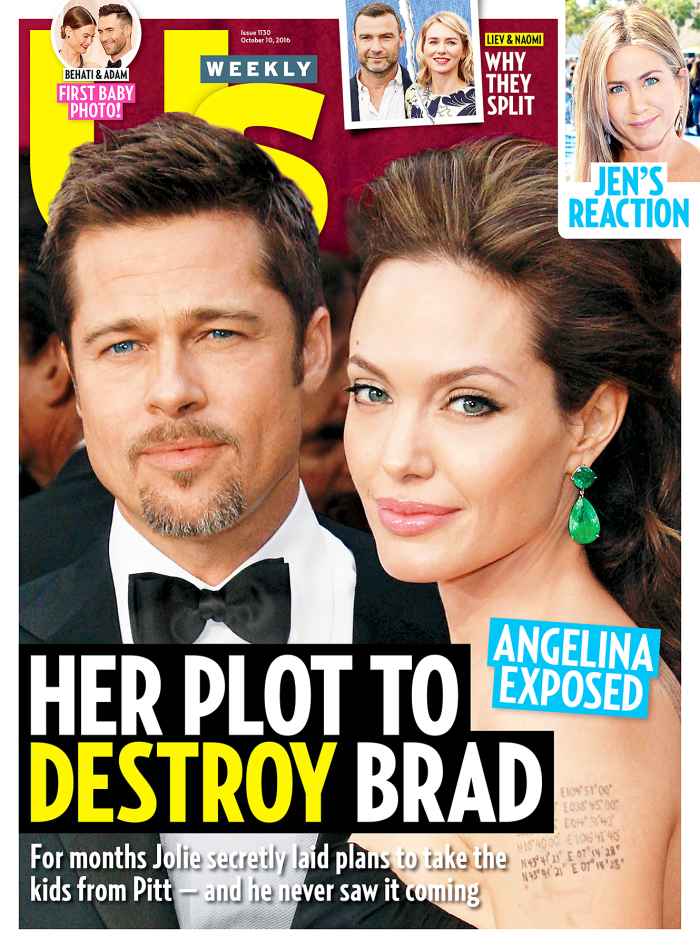 Pitt, 52, grew to resent the peripatetic existence. As far back as 2009, a source told Us at the time, Pitt wanted to enroll the kids in one school in New Orleans, while Jolie preferred homeschooling to allow them to continue their travels. “Brad wants them to have a normal upbringing and worries that they’ll come out spoiled, elitist and not grounded,” the source said at the time. “But Angie feels they should be ‘children of the world.’ They argue about it all the time: heated, screaming fights.”

In a 2012 interview, the Oscar-winner, 41, acknowledged Pitt was the tougher parent of the two. “Brad’s had to play bad cop more often,” she said. But according to a Jolie friend, Pitt was too strict for his wife’s liking. “[He] became a big yeller,” claims the source. “And she would not tolerate him yelling at the kids. There were a few times Angie said she was terrified.”

The War Machine actor, raised in a conservative household in Springfield, Missouri, was stern but never abusive, says a source who has worked with the family. “When he raises his voice and yells at the kids, it’s almost comical,” says the source. “He’s not one of those guys with a temper. He’s not a drill sergeant.”

At the skate park he had installed at the Los Feliz home, Pitt would often play with the kids. But if the youngsters didn’t put away their scooters and bicycles, “he’d go, ‘You clean up your bikes!’” relates the source. “Regular fatherly things. He might say, ‘How come nobody did this?’ or ‘Why didn’t this get done?’”

Pitt was also a stickler when it came to bedtimes. Says the source, “He might get upset if the kids stay up too late playing video games.” Structure and order, adds another Pitt source, were important to him: “Brad teaches them to be respectful human beings. Angelina lets the kids run around and behave badly.”

The disagreements ultimately doomed the couple. Jolie filed for divorce on September 19 and requested full physical custody of the children. Their split, admits a Pitt source, “came down to differences in lifestyle and parenting.”

For much more on Jolie and Pitt’s bitter split, pick up the new issue of Us Weekly, on stands now.

Big Brother's Alyssa Snider and Kyle Capener Split
Jennifer Garner Has 'No Desire' to ‘Slow Things Down’ With Love John Miller
‘Seinfeld’ Cast: Where Are They Now?
END_OF_DOCUMENT_TOKEN_TO_BE_REPLACED