Just in time for #ThrowbackThursday! An episode of Cribs from 2000 featuring Destiny’s Child resurfaced on Thursday, May 12, and in it, we’re reminded why the iconic girl group ruled the early-aughts.

Igniting extreme nostalgia feels, Beyoncé, Kelly Rowland and Michelle Williams give fans a tour of the Houston home where a teenaged Bey, now 34, lived with her childhood BFF Rowland, now 35, and the Knowles family.

Williams (who joined the group in 2000 after the band released their first two albums with fallen members LaTavia Roberson and LeToya Luckett) apparently did not live in the six-bedroom Texas manse, but still joined in on the fun.

From Beyoncé gushing over fellow ‘00s hitmaker Britney Spears to a baby-faced Solange living in the garage, let Us recap the seven best moments from DC’s time on the beloved MTV show. 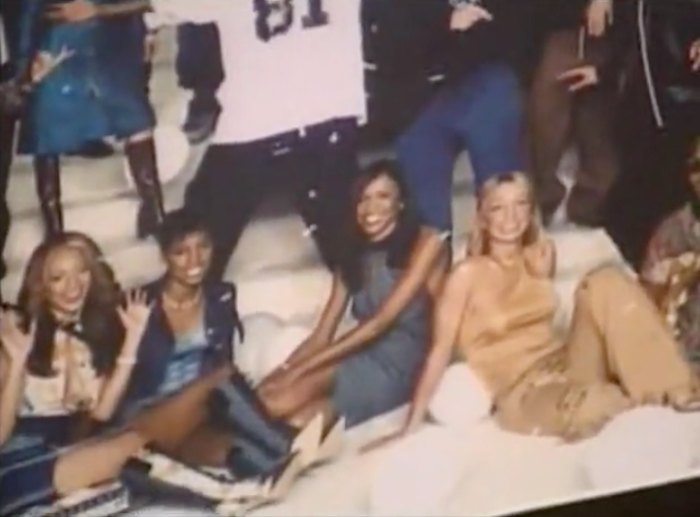 In the clip, the musical trio head into one of the house’s many living quarters where a star-studded group photo from a pre-Grammy Awards party hangs on the wall. As Williams points out, the pic features chart-toppers like *Nsync and Jennifer Lopez, but it’s Miss Spears who a young Queen Bey, then about age 18, was most excited to kick it with at the celeb-filled bash.

“Britney was so very sweet. As usual!” Beyoncé, who once narrated an MTV special dedicated to Spears, now 34, and opened for her Crazy 2K Tour in 2000 with Destiny’s Child, said of the “Sometimes” singer. 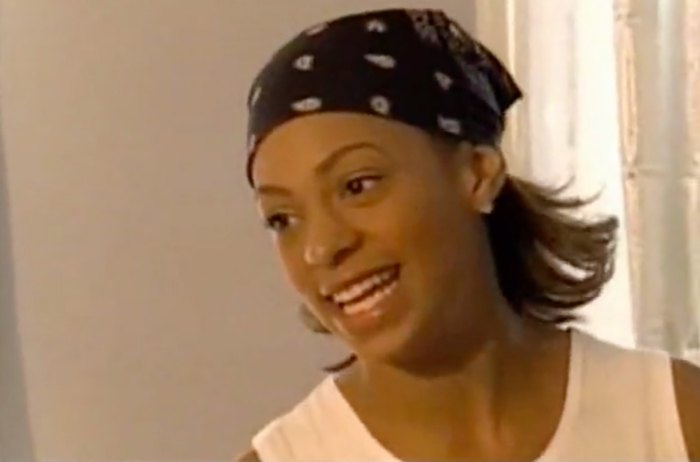 2. Solange Lives in the Garage

Beyoncé proudly introduces her little sis, who invites MTV’s cameras to get a glimpse of her personal space — which used to be a garage.

“This used to be the main garage, but since I like to listen to music sky-high, I guess my parents decided they didn’t wanna hear that,” Solange, then about age 13, explains. “So they let me have the garage apartment. I got everything I need in here. Hopefully, I can get a refrigerator and a microwave so I don’t ever have to leave!” 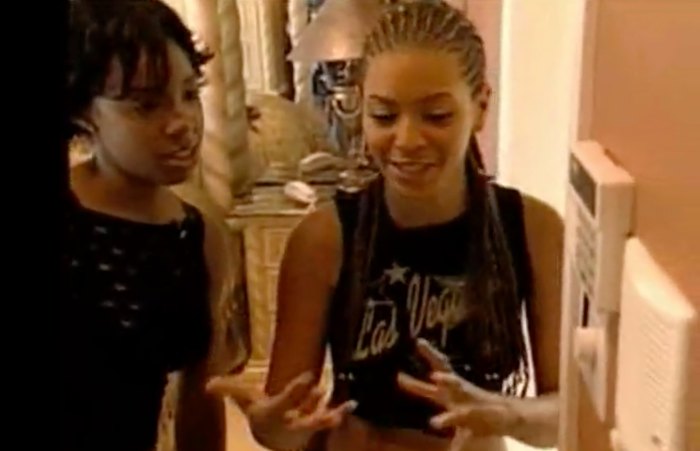 3. Beyoncé Discovers the Magic of Intercoms

Walking through the master suite that once belonged to her now-divorced parents, then-manager Mathew and Tina Knowles, the Destiny’s Child frontwoman makes sure to draw attention to her new home’s most amazing feature: its intercom system.

“Oh, wait. These are cool. I know everybody has these, but this is our first house with these. We’re a little late,” Beyoncé enthuses. “We just moved in, so I was like, ‘Ahh! I have an intercom!’” 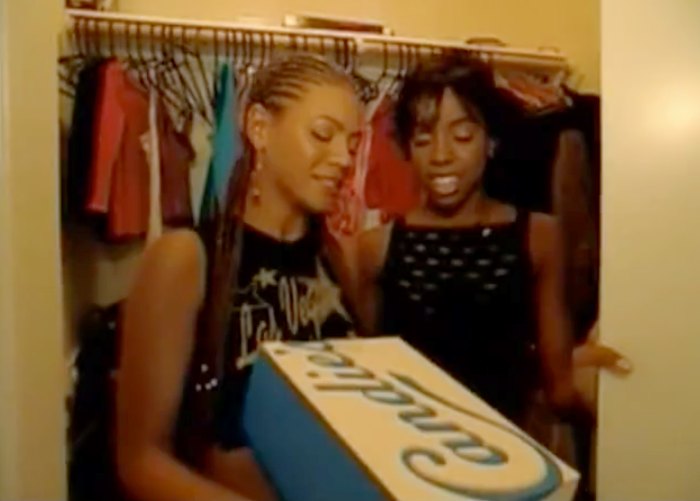 4. Kelly Keeps Her Ex-Boyfriend in a Box … Kinda

When Rowland, then around 18 years old, takes you into her closet, Beyoncé volunteers a fun (and perhaps embarrassing) fact about her right-hand woman.

“For all the ladies that think you’re the only one that can’t let go of memories when you have a boyfriend when you break up, Kelly keeps a box [filled with memories],” a cornrowed Bey explains, pointing to a Candie’s shoebox.

This revelation prompts the girls to burst into “The Way We Were” by Barbra Streisand. Rowland concludes by saying, “We will move on because we are independent women!” Amen.

PHOTOS: Stars Rewear Their Most Iconic Costumes From Movies, TV, and Music Videos 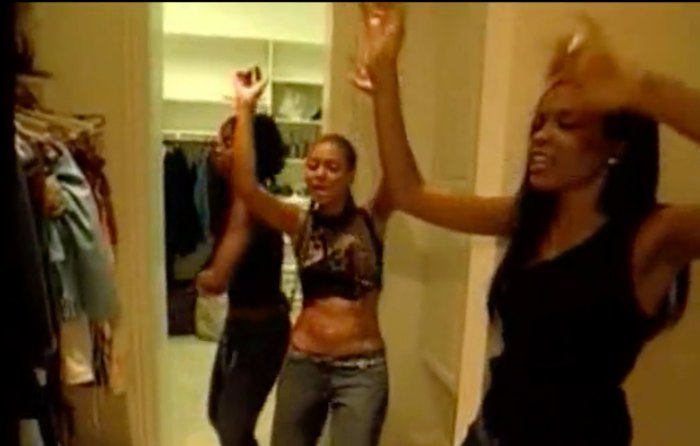 5. They Give an Impromptu Performance of “Independent Women” 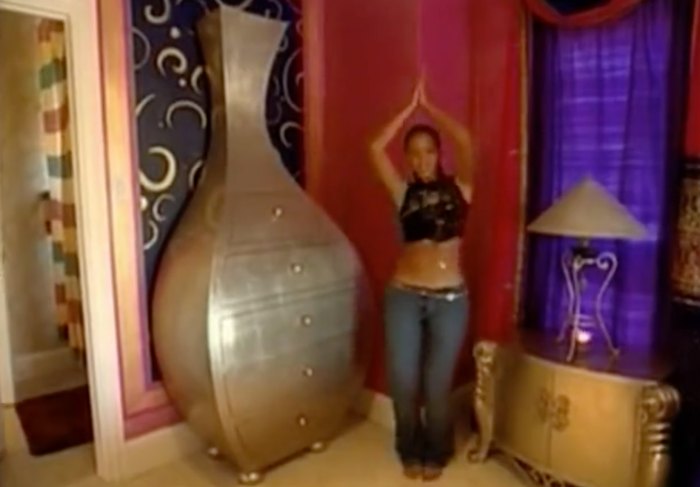 6. Beyoncé Has an Xtina-Inspired Bedroom

Having already voiced her love for Spears, Beyoncé reveals she also has a thing for another pop princess: Spears’ then-rival Christina Aguilera. In fact, the current Voice coach’s breakout song, “Genie In a Bottle” inspired her bedroom décor.

“And this is my favorite piece in the room. It’s so cool because it’s carved like a genie bottle,” Beyoncé says, gesturing towards her dresser and singing to the tune of Aguilera’s first single. “And it reminds me of genie in a bottle, baby.” 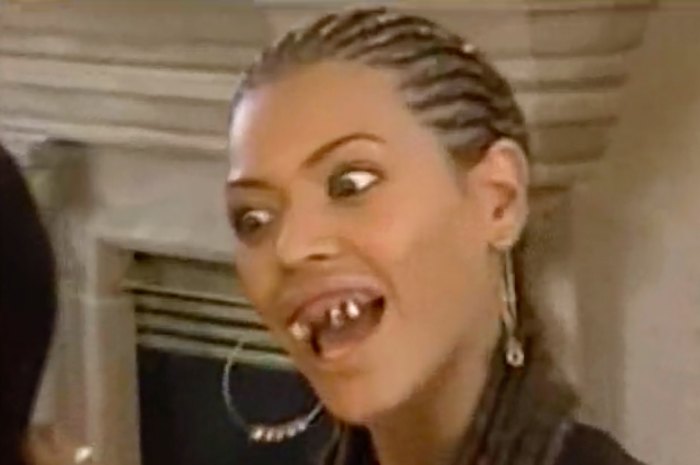 Rather inexplicably, Beyoncé, Rowland and Williams end their segment by putting in false, hillbilly-style dentures and saying with a country twang: “Y’all come back now, ya hear?!”

Watch the video above.