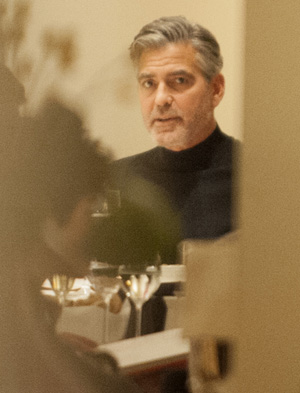 If you ever happen to walk into a restaurant and see George Clooney dining there, do whatever it takes to get seated next to him!

The 51-year-old star enjoyed a meal – and apparently some lively conversation – with friends at the Grill Royal restaurant in Berlin over the weekend. However, worried his party was perhaps too lively, the affable actor generously picked up the bill for a table of strangers who happened to be seated nearby.

Local German newspaper Bild broke the news of Clooney’s generosity (later confirmed by the actor’s rep), reporting that the Oscar-winning actor and part-time tequila maker dropped about $135 on the dinner tab. Something the story also noted? Clooney and friends actually weren’t disruptive in the first place.

“They had behaved in a very cultivated manner,” one of the men who benefited from Clooney’s kind gesture told the newspaper. And when he was told a stranger picked up their bill? “I was stunned,” he replied.

The businessman – who didn’t realize he was among Hollywood royalty – walked over to Clooney’s table and left his card, telling the star that he hoped to one day be able to return the favor.

Clooney, who is known for his generosity (and apparently has excellent manners), is in Germany filming “The Monuments Men,” which is about a group of art experts trying to save priceless artworks from destruction by the Nazis. Clooney is starring in and directing the film, which also features Daniel Craig and Cate Blanchett.

Keep an eye out for him while he’s still in town, Berliners!

PHOTO: Chris Brown Gets a Cast After Frank Ocean Fight

Rihanna Defends Chris Brown Relationship: ‘We Value Each Other’