Everything changed for Michelle Williams when she least expected it. In July, a decade after the death of her ex-boyfriend Heath Ledger, the Oscar nominee, 38, quietly married singer-songwriter Phil Elverum.

“She and Phil are a perfect match,” says a source close to Williams exclusively in the new issue of Us Weekly. “She kissed a lot of frogs to get where she is now, but she doesn’t regret it one bit.”

Like the actress — who shared daughter Matilda, now 13, with Ledger — Elverum, 40, is widowed and has a young daughter. His first wife, artist Geneviève Castrée, died from stage IV pancreatic cancer in 2016 when their daughter, Agathe, was just 18 months old. 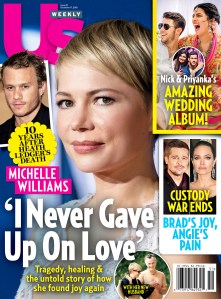 For more on Williams and Elverum’s love story, watch the video above and pick up the new issue of Us Weekly, on stands now.