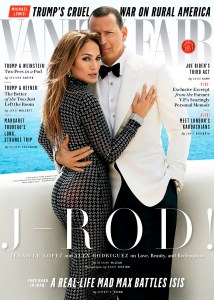 Love at first sight! Jennifer Lopez and Alex Rodriguez opened up about how their romance began in their cover story for the December 2017 issue of Vanity Fair.

The “Ain’t Your Mama” singer, 48, bumped into the former New York Yankees player, 42, while having lunch in Beverly Hills last winter. “I almost yelled out, ‘Alex,’ but I am the shyest person when it comes to things like that,” she told the magazine. “I could literally just have walked away. But I walk over and tap him on the shoulder and say, ‘Hey.’ I had just come from a promo for my show, Shades of Blue, so I’m dressed like my character, like a boy — Timberlands, jeans, curly short hair. He looks at me. I say, ‘It’s Jennifer.’ He says, ‘You look so beautiful.'”

Soon after, J.Lo and A-Rod had their first date at the Hotel Bel Air. “He was sitting there in his white shirt, very confident and manly, but then he was just so talkative!” she recalled. “I think he thought I was going to be this loud person, but I’m not. I just listen. So he’s talking, talking about his plans, about how he had just retired from baseball, about how he saw himself getting married again, all these things you wouldn’t normally talk about on a first date. I don’t know if he thought it was a date. … He was nervous, and it was really cute.”

The former athlete admitted to Vanity Fair that he wasn’t totally sure if it actually was a first date, but he “thought it would be a win-win” situation either way. After the Grammy nominee told him she was single, he went to the bathroom and sent her a text message that read, “You look sexy AF.” Then, the fire alarm in the hotel went off and they had to evacuate.

Since that night, Lopez and Rodriguez have become one of the most well-known power couples. “We are very much twins,” he told the publication. “We’re both Leos; we’re both from New York; we’re both Latino and about 20 other things.”

These days, the “Let’s Get Loud” singer is happiest at home, in pajamas, eating chocolate chip cookies with her friends, according to her boyfriend. “[She is] the role model for health and wellness,” he said. “She rarely drinks. She tries to get at least eight hours of sleep. That helps explain why she’s so beautiful.”

The feeling is mutual. “The most impressive thing to me was how he did pick himself [after his 2014 MLB suspension for using performance-enhancing drugs] and take that opportunity to make himself a better person,” Lopez told Vanity Fair. “The hardest times prove who you are. That’s what I love and admire the most about Alex. He doesn’t let anything beat him. He just comes back stronger.”