Four years in the making! After first meeting back in 2010, Jessica Simpson and former NFL player Eric Johnson are finally set to tie the knot in Montecito, Calif. on Saturday, July 5. From celebrating birthdays and anniversaries to Jessica’s stunning slimdowns and welcoming daughter Maxwell and son Ace, take a look back at the couple’s adorable (and sometimes intimate!) love timeline.

July 2010: Us exclusively shared the first pictures of Simpson and Johnson together as they stepped out in Jacksonville, Fla. to celebrate the former NFL player’s grandparents’ 60th wedding anniversary. The two began dating five months earlier while Johnson was still legally married to stylist Keri Johnson. (Prior to, Simpson had some romance misfortunes with ex-husband Nick Lachey, John Mayer, and Tony Romo.)

July 10, 2010: Whoa, PDA! The couple passionately locked lips on a yacht on the Italian island of Capri during Simpson’s 30th birthday weekend shindig. She’s “really happy,” an insider told Us at the time.

July 29, 2010: Us Weekly exclusively confirmed that Johnson pulled out of his two-year business program at the University of Pennsylvania’s Wharton School to keep close to the singer in L.A. “He doesn’t want to move to Philadelphia and leave her so soon after they got together,” a source told Us.

Oct. 7, 2010: Johnson officially finalized his divorce from Keri after five years of marriage. They cited irreconcilable differences and neither received spousal support.

Oct. 21, 2010: When exes collide! With their relationship still fresh, the couple came face-to-face with Simpson’s ex-husband Nick Lachey and his girlfriend Vanessa Minnillo at L.A. eatery Red. “‘I hope Vanessa likes her clothes because I bought them for her, since Nick took all my money,” Simpson was overheard telling her server. Lachey and the former TRL VJ married in July 2011 and welcomed son Camden in September 2012.

March 2011: The fashion designer told Women’s Wear Daily that the twosome may elope. “We’ve both been married before. We’re enjoying our commitment to each other,” she said. “We want to take our time.”

September 2011: Hold up! Us exclusively revealed that Simpson postponed her wedding to Johnson. “Everything is up in the air. She can’t figure out what kind of day she wants. Some days she wants a big wedding in Hawaii, then other days she wants something closer to home,” a source revealed to Us. A pal added: “She won’t commit to a date.”

Oct. 31, 2011: Finally! After months of speculation and an undeniable baby bump in scores of pics, Simpson confirmed that she was pregnant and expecting her first child by posting a Halloween-themed picture of herself as a mummy via Twitter. “It’s true, I’m going to be a mummy!” she wrote. The following month, Simpson told Us the baby were “going to wait [until] after the baby” was born.

March 18, 2012: Simpson was the guest of honor at a Charlotte’s Web-themed baby shower in L.A. Despite being ridiculed for her weight gain during her pregnancy, the star appeared to be in good spirits as she was joined by more than 50 of her closest friends and family. “It was a kid friendly shower with many of her friends bringing babies,” a source told Us.

April 2012: Move aside, Demi Moore. Pregnant Simpson went completely nude on the April cover of Elle magazine—and revealed the pair were expecting a baby girl! “We’re embroidering it on things. It’s nothing shocking and nothing you’ll have to add to the dictionary,” she said of the name. “When people hear it, they’ll know why.”

May 1, 2012: She’s here! The couple welcomed daughter Maxwell Drew at 9 lbs. 13 oz. 21 3/4 inches. “We are so grateful for all of the love, support and prayers we have received. This has been the greatest experience of our lives!” the first-time mom wrote on her website.

May 30, 2012: The 5-foot-3 mom confirmed that she was joining the Weight Watchers family as a spokesperson via social media. “The cool thing about the program is that it focuses on healthy habits for the long-term (and I can still indulge in my guilty pleasures every now and then, too),” she wrote on Facebook. “I have actually gotten a group of friends together who are going to be doing it with me.”

October 2012: As Us reported, Simpson lost a whopping 60 pounds in five months after Maxwell’s arrival. “My body is not bouncing back like a supermodel,” she admitted at the time. “I’m just your everyday woman.” That same month, Simpson’s parents Joe and Tina filed for divorce after 34 years of marriage.

November 2012: No way! Unexpected, but ecstatic. Six months after welcoming Maxwell, Us broke news that the new parents were expecting baby No. 2. “It definitely wasn’t planned. But yes, Jessica is pregnant again,” a source said. “She really is overjoyed!”

January 2013: Baby first! After hearing the news of a second pregnancy, Weight Watchers put out a statement that Simpson would be taking a break from the program. That same month, it was revealed that her BFF CaCee Cobb was also expecting a child with husband Donald Faison. 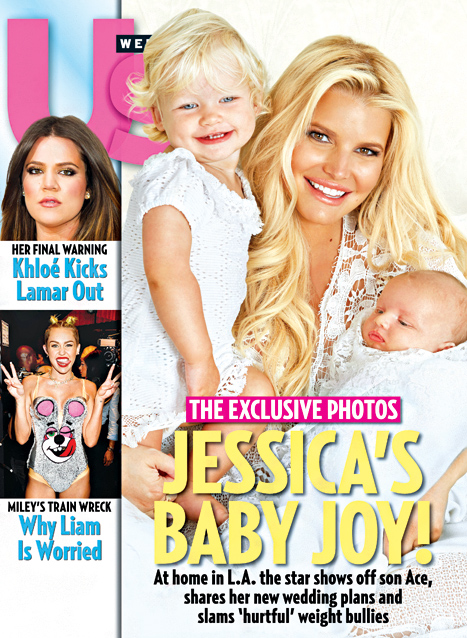 March 6, 2013: Whoops! Simpson accidentally revealed her baby-to-be’s gender during an appearance on Jimmy Kimmel Live. “The crazy thing is I never knew a wiener could make me nauseous,” she quipped. “Well, I guess I just told the world that I’m having a boy!”

April 14, 2013: Why not? Simpson celebrated her second pregnancy with a Tom Sawyer-themed baby shower at L.A.’s Hotel Bel-Air with mom Tina, sister Ashlee, and friends Jessica Alba, and Cobb.

Aug. 28, 2013: Simpson exclusively debuted the couple’s baby boy on the cover of Us Weekly, and spoke about being a proud mother of two. “With two kids, we have our hands full, but every day is a new adventure,” she said. “Pregnancy is a lot. It was hard to do two so close together. I have this huge sense of accomplishment, and I feel in my heart that I’m done. But obviously, accidents do happen!”

October 2013: Shortly after returning to Weight Watchers, Simpson and her husband-to-be traveled to Capri, Italy to scout wedding locations for their summer 2014 nuptials. “She seemed very excited about it,” a pal told Us.

Nov. 23, 2013: Slimmed down, and ready for her close-up! The family of four made their red carpet debut together while attending a Dillard’s event for Simpson’s clothing line in Dallas, TX. They were joined by mom Tina, sister Ashlee and her now-fiance Evan Ross.

Nov. 26, 2013: Date night! The former Fashion Star mentor and Johnson dined at Zebra’s Bistro and Wine Bar while spending the Thanksgiving holiday with their two children and Johnson’s family in Boston. “Eric is such an amazing dad. She completely trusts him and has all the confidence in the world with him as a dad,” a source said. “She loves Eric’s family and is really excited to bring both kids back east and spend Thanksgiving with them.”

Jan. 7, 2014: Let the countdown begin—again! Simpson admitted that she and Johnson were finally headed to the altar sometime this year during a Good Morning America appearance. “We need to get married,” she said. “I already feel like we’re like an old married couple already. If he wanted to run, he could have run when I was hormonal and pregnant.”

Jan. 19, 2014: Good times, galore! Simpson and Johnson went on a social media spree, posting more pictures than usual of their tykes during the month. Some of the cute family activities included Johnson lifting both Maxwell and Ace in the air, kid selfies, adorable black and white shots, and one of Ace beaming next to Cobb’s son Rocco.

Feb. 24, 2014: He’s irresistible! Simpson shared an intimate snapshot giving her fiance a big smooch in bed. “Goodnight kiss. I love this man,” she gushed via Instagram. The “I Wanna Love You Forever” singer kept her eyes shut and went makeup-free.

March 6, 2014: Crossing the finish line. The mom of two shared news that she officially reached her weight loss goal via Instagram. “First time rocking a white dress this year…but not the last!!Thanks @weightwatchers!” she wrote, alongside a glam selfie.

March 13, 2014: Sorry, Italy. More than two years after getting engaged, the couple finally made the decision to keep their nuptials in the States. They “decided to keep it simple,” a source said. Another added it would be “too much” to ask friends to fly to Europe for their special occasion.

May 3, 2014: Capitol class! Simpson and Johnson attended the White House Correspondents’ Dinner in Washington D.C., barely escaping from an awkward run-in with her ex-boyfriend Tony Romo and his wife Candice Crawford.

May 14, 2014: Us broke news that the pair were set to tie the knot over the July 4 weekend, and the bride would not be wearing white. “Jessica is having something unique made,” a source told Us. “It will be very different from the Vera Wang she wore to wed Nick Lachey [in 2002].”

May 21, 2014: Simpson posted a cute picture of the duo kissing to celebrate their fourth anniversary. “Happy 4yr anniversary, baby!! I am so honored to be the mother of your babies and loved by you every moment.” She later added: “I can’t wait to marry you!!!”

May 27, 2014: Bridal ready! Simpson showed off her incredible swimsuit body one month before tying the knot via Instagram. “If I’m in a bathing suit I should pose proudly,” she wrote.

June 8, 2014: The lovebirds ditched tradition as they celebrated a joint, co-ed bachelor-bachelorette bash at Eveleigh restaurant in West Hollywood. They “couldn’t have looked happier,” an eyewitness told Us. “They kept raising their glasses,” another added. “They were having a great time. Jessica looked absolutely amazing—and tiny.”

July 5, 2014: Rejoice, rejoice! Simpson and Johnson are finally saying “I do” today in front of close family and friends, and their children Maxwell and Ace. Days before their nuptials, Simpson was still indecisive about her wedding venue, but a source told Us the reception would be “very rustic-chic” nonetheless.