Jessica Simpson 'Felt Like a Call Girl' Amid Secret Affair With Movie Star
John Legend: How My Kids With Chrissy Teigen Adjusted to New Baby
You Love Dolly Parton’s Music, but Have You Read Her Books?
END_OF_DOCUMENT_TOKEN_TO_BE_REPLACED

Us Weekly is donating 25 cents to charity for Hurricane Harvey relief efforts for each copy of this issue of the magazine purchased by consumers on the newsstand. To make a donation or to learn more about J.J.’s fund, visit youcaring.com/jjwatt.

A step beyond. NFL player J.J. Watt wanted to help Hurricane Harvey victims any way he could, so he set a goal of raising $200,000. As of Friday, September 1, the athlete has raised more than $15 million for those affected by the devastation in and around Houston, Texas.

“I started out with a goal with 200,000 and seeing where it is today is unbelievable,” Watt exclusively tells Us of his crowdfunding page. “I think it’s a massive testament to the good in people and the good that’s out there in the world.”

The Houston Texans defensive end was pleasantly surprised with the response given that he “literally shot a cell phone video in [his] hotel room” asking people to lend a hand.

Several famous faces have donated to the cause, including Miley Cyrus, Arnold Schwarzengger and Ellen DeGeneres, the latter of whom presented Watt with a $1 million check from Walmart on her Wednesday, August 30, episode.

“Ellen did an incredible thing – having us on. She’s been such a great philanthropist her entire life,” Watt said. “Drake is an incredible person and donated as well. There have been so many football players, athletes from different sports, musicians, entertainers – Arnold, Kevin Hart! Everyone has really stepped up to the plate. Its so cool to see what can happen when we all ban together for one thing and I think we’re seeing that right now. Over $15 million raised in one week is pretty amazing.”

See Which Star Was Named Most Charitable Celeb of 2016

Watt, who has played for the hometown team since 2011, felt compelled to aid those who supported him throughout his career. 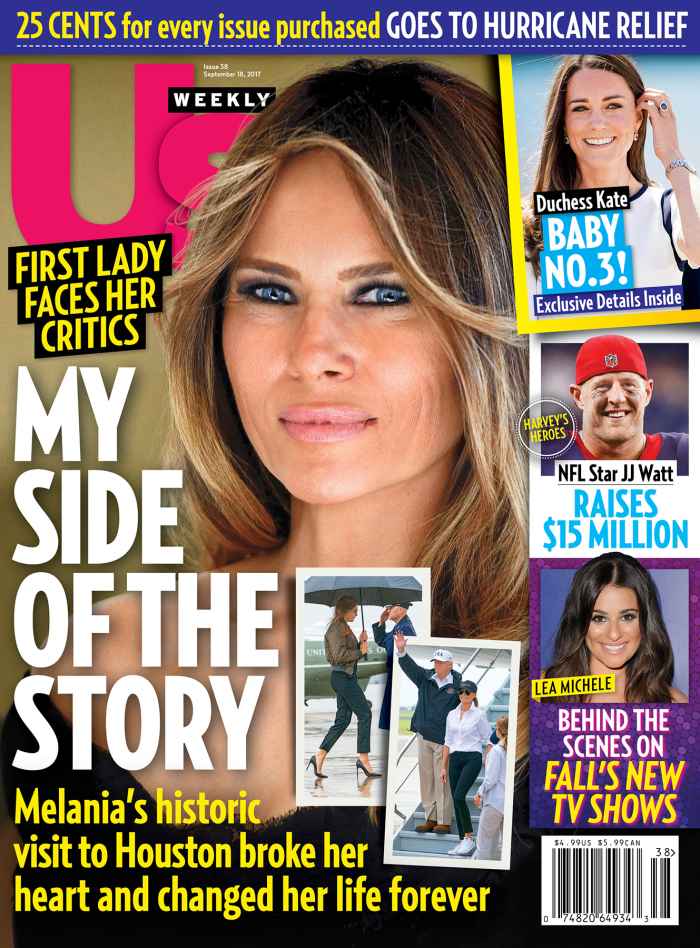 “These people and this city have treated me so incredibly throughout my career,” the Wisconsin native told Us. “I’ve been so fortunate to play for such good fans, such great city. When you’re going through a situation like this, you obviously want to do anything you can do to help. The best thing I could do at the time, which was being stuck in Dallas, was try and use my platform to raise as much money as I could. The people stepped up to the plate. They deserve all the credit. There are so many generous people out there and I’m just the one who coordinates it.”

In addition to donations, the pro player is making sure the money gets into the right hands. “We’re trying to make sure it goes directly to the people,” he said. “So our first wave of operation is we’ll have nine semi-trucks going out there and my teammates and I will go straight into the communities and hand stuff out there. And then beyond that, its about making sure to do it right. … So I want to make sure I take the time to do it right, for the people who donated and for all the people of Houston.”

See Who Made Us’ List of Stars Who Care

Watt is also looking forward to the upcoming football season to hopefully bring a little joy back to the town he loves so much. “This season is going to be a very important one for this city,” he said. “This city has been so much bigger than football. If we can go out there every Sunday for three hours and play as hard as we can for these people just to put a smile on their faces and take them away from what they’re going through right now, that’s what we’ll do.”

To help the cause and donate now, head over to YouCaring.com.

Jessica Simpson 'Felt Like a Call Girl' Amid Secret Affair With Movie Star
John Legend: How My Kids With Chrissy Teigen Adjusted to New Baby
You Love Dolly Parton’s Music, but Have You Read Her Books?
END_OF_DOCUMENT_TOKEN_TO_BE_REPLACED