The Beauty Brand the Kardashians Made Famous Has a Futuristic Moisturizer
How to Nail Intermittent Fasting Just Like Jennifer Aniston
The Secret to Seriously Slaying J. Lo’s 10-Day Diet Challenge
END_OF_DOCUMENT_TOKEN_TO_BE_REPLACED

Unconditional love for her kids! Julia Roberts opened up about motherhood and embracing the ups and downs during an interview with Good Morning America’s Michael Strahan on Wednesday, April 5.

The Oscar winner, 49, who shares twins Hazel and Phinnaeus, 12, and son Henry, 9, with her husband Danny Moder, said she can’t choose just one favorite thing about being a parent. “I love it. I love it when it’s easy, and I love it when it’s challenging. I love being able to go to bed at 8:30,” she joked. “You’re allowed to not only appreciate the weekends in a new way again and Christmas holidays in a new way again and summer vacation is a whole new joy — it’s such a great learning experience. They’re just such great teachers, young people. Their point of view is so unique.”

The Pretty Woman actress revealed that her family is what motivates and inspires her to keep acting. “There’s nothing more thrilling than creating a piece of work and feeling like you have some triumph to bring home and lay at the feet of your family,” she said. 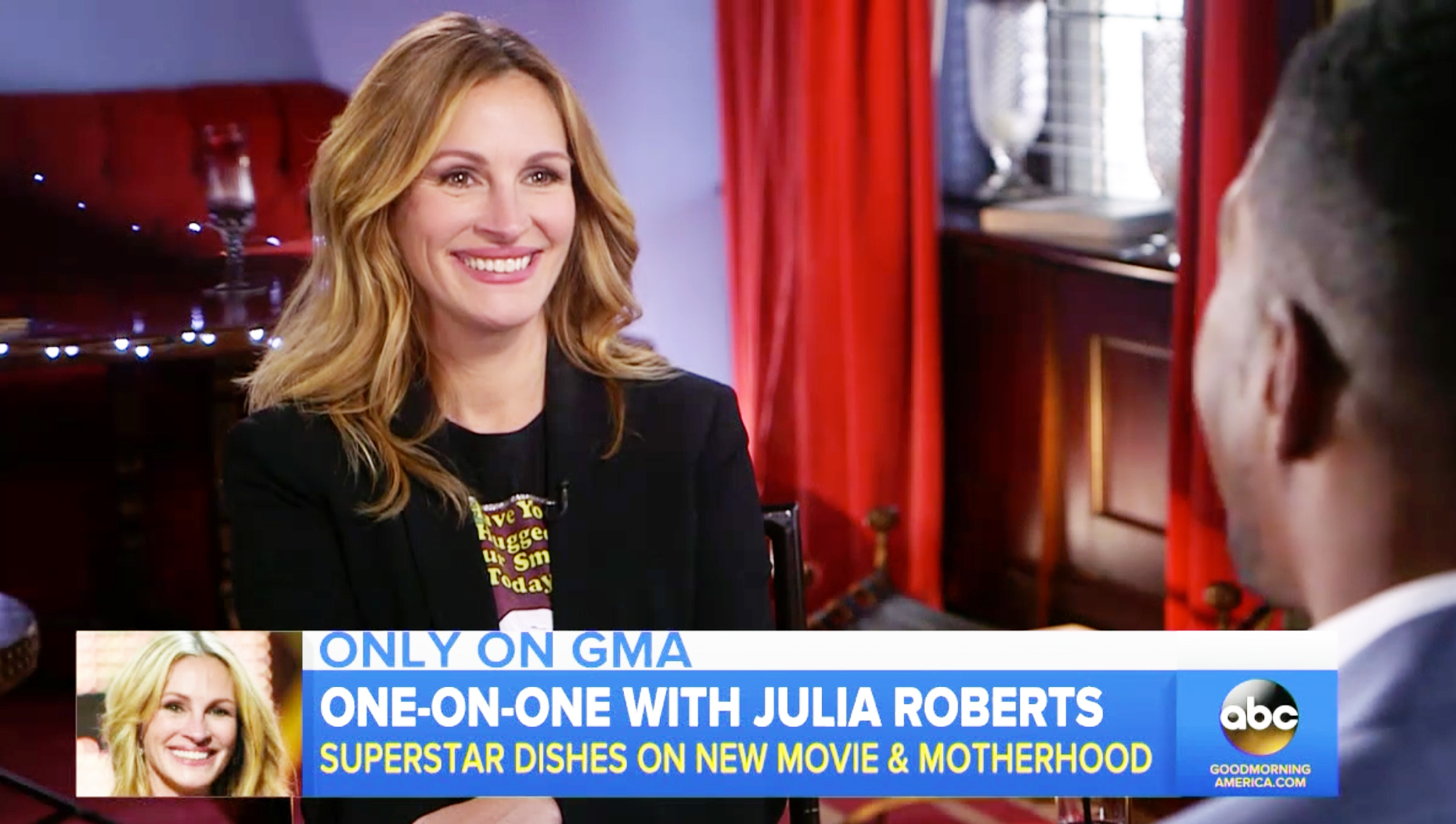 Roberts is excited for the day when her kids will be old enough to have a movie marathon of all her films. “At the age they are now, it would be a short night,” she told Strahan. “But in a few years, there are some that I’m really looking forward to. I guess, I think of my daughter. I can’t wait for her to see My Best Friend’s Wedding.”

The iconic actress starred as Julianne Potter in the classic 1997 romcom about two childhood friends who vow to marry each other if they’re both still single by age 28. “That will be sweet,” Roberts added of the moment her daughter sees the beloved film. “And I think they’ll be pleased with how I spent my 20s and 30s.”

For now, Roberts’ children will have to settle for watching her voice Smurfwillow in the upcoming film Smurfs: The Lost Village. “The Smurfs are this odd little colony of creatures that have stood the test of time,” she said. “They were around when I was young, and my kids played them. The movies are always so sweet and fun, and I thought, ‘Yeah, I want to be a Smurf.’”

The Beauty Brand the Kardashians Made Famous Has a Futuristic Moisturizer
How to Nail Intermittent Fasting Just Like Jennifer Aniston
The Secret to Seriously Slaying J. Lo’s 10-Day Diet Challenge
END_OF_DOCUMENT_TOKEN_TO_BE_REPLACED