The Bra Lady Gaga Loves With Nearly 3,000 Reviews
Shoppers Say This Is the Softest Cardigan You’ll Ever Own
77.9% of Users Sustained Weight Loss Over 9 Months Using This Program
END_OF_DOCUMENT_TOKEN_TO_BE_REPLACED

So much to air… and share! Mom-of-three Kristin Cavallari does not hold back in her new book, Balancing in Heels: My Journey to Health, Happiness, and Making It All Work. Here, Us Weekly rounds up 10 revelations from the former Laguna Beach and Hills star in her very open self-improvement book, out Tuesday, March 15, including startling new details from filming the MTV series to her post-Laguna dating history, as well as motherhood, marriage and more. 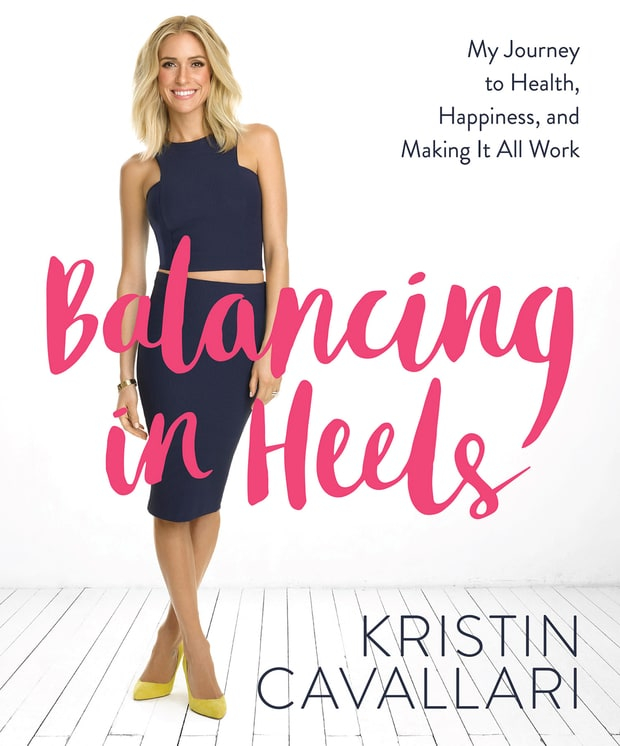 Other forces were at play here, folks. Cavallari writes that everything went downhill with her high school boyfriend, Stephen Colletti, after they signed on for Laguna Beach. “I had a great boyfriend, Stephen, with whom I had a typical teenage romance,” she writes in her book. “He was my entire world, and we loved hard and fought hard… Normal high school relationships are dramatic enough, but ours now had the added pressure of being seen by MTV viewers across the country as well as being manipulated by the show’s producers, a set of adults who were suddenly very involved in the intricacies of our lives.”

According to Cavallari, the producers played a part in the memorable Stephen/LC/Kristin love triangle, and it affected the real-life romance. “One of the most hurtful things they did was pressure Stephen to spend time with another girl from the show, Lauren, while he and I were dating,” she recalls in her book. “It certainly provided some juicy conflicts, but it also affected me deep. I felt threatened. On one side, it seemed like the producers were trying to break us up… on the other side, I worried that my relationship with Stephen was becoming less stable…”

PHOTOS: The Hills Stars: Then and Now

2. Kristin Explains Why She Was So Mean on Laguna Beach

So that’s why! Continuing her train of thought from producers’ manipulation, Cavallari says the root of her catty behavior on Laguna (i.e. constantly lashing out at Conrad and others) was her way of her protecting herself.

“Because of all this, I did the only thing I knew how to do: put up a wall,” she writes. “That made it look like I didn’t care about anyone but myself. But Stephen was the most important thing in my life, and there was nothing I cared about more. I hated fighting with him on camera because it felt like I was airing all our dirty laundry… To some I seemed confident and beyond my high school years; to others, I seemed like a mean girl. Either way, I was shocked and sad that I was being portrayed as anything but myself: a sarcastic, goofy girl who just wanted to have fun.”

Age was a huge factor, too. “I didn’t know how to deal with and handle my emotions. I was only 17!” she writes. “I had some anger stored up from my parents’ divorce and my new stepfamilies, which the producers saw. They put me in situations where they knew I would react. I was a fighter back then: When I felt threatened, I acted.”

3. Kristin’s Been Cheated On

Long before Jay Cutler, there were many… many frogs. Cavallari recalls wading (or more like plunging) into the dating pool after Laguna Beach ended, and it was not a pretty sight. “After high school, I dated some not-so-great guys,” she recalls. “Looking back, I can boil it down to one thing: my lack of self-confidence.” Two horror stories particularly stood out for the star.

“A couple of years before I met Jay, I dated one guy who, as it turned out, was seeing me in L.A. plus another girl in New York City the entire time,” she shares. “He was a powerful businessman, and I knew he wasn’t a good guy. I had known for years and saw what jerk he was to women… My gut told me thousand times to run the other way, but my insecurity kept me around for all of this BS.”

4. Kristin Tweeted “I’m Ready to Meet My Future Boyfriend” a Day Before She Met Jay

Ask and you shall receive! Cavallari put it out into the universe, and received a response the next day. However, her romance with Cutler took time. “The night before I met Jay, I actually tweeted, ‘I’m ready to meet my future boyfriend.’ Well, be careful what you wish for, because Jay checked off my entire list!” she writes. “The first time I had heard of Jay was a year prior, when I had yet to do that growing up. When I was in the middle of filming The Hills, I got a phone call from my publicist saying that Jay Cutler wanted to fly me to Chicago and take me on a date… I always thought of this as a pretty ballsy move, like you think very highly of yourself, and it turned me off a little.”

Years later, Cavallari discovered that Cutler wasn’t the one to put in a call, but it was one of his Bears teammates. But it took her a year to come around initially to finally give Cutler a shot. “I wanted out of the L.A. lifestyle — the clubbing and the superficial people.” It was ultimately Cavallari’s mom who reminded her daughter of Cutler’s request, and a meet-and-greet was orchestrated. “Little did I know that I would end up marrying this man. When Jay walked into the room, I knew that instant,” she writes. “I got nervous and became shy, which only happens when I truly like someone.”

5. Kristin Explains Why She and Jay Called Off Their Engagement the First Time

Cavallari called off her engagement to Cutler the first time around in July 2011, and there was a good reason why. “I always go after what I want in life, with men or otherwise, and I never settle. If something doesn’t feel right, I act on it. It’s just who I’ve always been,” she writes. “At that moment, something wasn’t right. A few things needed to change, and I knew the only way Jay would see how serious I was, was if I ended the relationship.”

The two, however, reconciled and got engaged for the second time in January 2012. They eventually tied the knot in June 2013.

6. A Dog Bit Kristin’s Face the Morning of Her Wedding (And Jay Thought She Was Calling It Off!)

Not everything was smooth sailing after the couple reconciled. In fact, their wedding day was a near bust. “Everything went smoothly until that morning. I thought I was getting away with nothing going wrong,” she writes. Unfortunately, something went wrong with her 12-pound Maltipoo, Brando, who bit her face on her big day.

“The morning of the wedding, I was at home with some family… I put my head down by Brando, and next thing I know, I’m sitting up in pain, realizing that the hand I’m holding to my face is covered in blood. Brando bit me right on the eye,” she writes. “Luckily, I closed my eye in time and he only got my eyelid. In shock, I went to a mirror. All I saw was a swollen eye and blood everywhere. I called Jay in hysterics… he could barely understand me through my sobbing.”

Cutler, however, was able to coax her, and lucky for him! “Later during his speech at the wedding, he would tell everyone, including me, that he thought I was calling off the wedding!” Cavallari jokes. “Poor guy!”

7. Camden Was Conceived Three Months After Kristin and Jay Got Back Together

They knew what they wanted! “If you had asked me 10 years ago when I was going to have kids, I would have told you I’d be the last of my friends, because my entire world revolved only around me,” Cavallari writes. “But meeting Jay and a few years of growing up changed everything. So, at just 24 years old, I became pregnant with my first. It was interesting timing considering Jay and I had only recently gotten back together after breaking off our engagement. But after 3 months of working on the relationship and being back together, we completely committed to our futures together. Conceiving Camden was an in-the-moment decision that we both felt strongly about; it would end up being the best thing we ever did.”

Cavallari says Cutler wasn’t instantly comfortable with her pregnant body, and it took some time for him to completely embrace it. “I’ve noticed that guys are either totally turned on by pregnancy or a little freaked out by it. If your man falls more on the freaked-out scale, you aren’t alone. Let’s be honest: Having another human being growing inside you is pretty crazy,” she writes. “Once I discovered Jay was still getting comfortable with my body having an entire other human being living inside it, I realized he was going through his own changes as well. Knowing this made it easier to tell him how I was feeling. And once Jay knew all I needed to hear was that he thought I looked great, he made sure to say it often.”

PHOTOS: Kristin Cavallari's Life as a Mom With Jay Cutler

9. The Boys Drank Goat’s Milk After the Breastfeeding Stopped

Bahhhhh after breastfeeding! The health enthusiast says she opted to give both Camden and Jax a special goat’s milk formula after she weaned them off of breastfeeding. “I’m not a fan of soy (it’s usually genetically modified; more about that later), and both Cam and Jax have sensitivities to cow’s milk — and unfortunately, soy and cow’s milk are the only two options for store-bought formula available right now. Goat’s milk is the closest thing out there to human breast milk. Plus, it is more easier digested than cow’s or soy milk.”*

Cavallari, Cutler and their pediatrician came up with a custom formula, which she shares in detail in her book.

10. She Has Sacrificed for Her Family, Including Primping

She’s earned her mommy badge, alright! An uber honest Cavallari says there have been days she sacrificed hygiene to take care of her little ones. “In the early months, I went days without washing my hair and wore the same yoga pants until they started to smell,” she writes. “On days I was alone, I wouldn’t brush my teeth sometimes until Camden took his first nap. Who am I kidding? That sometimes still happens when I’m alone with the kids!”

But she would do it again and again. “While I’m not exactly proud of these moments, I do realize that ‘letting go’ is another way of prioritizing our family’s overall happiness over the day-to-day mess. In that regard, I am happy to be a bum for a day or two!” Cavallari writes. “Accepting that change has been freeing and made my life less stressful.”

Pick up a copy of Cavallari’s new book, Balancing in Heels: My Journey to Health, Happiness, and Making It All Work, on shelves now.

The Bra Lady Gaga Loves With Nearly 3,000 Reviews
Shoppers Say This Is the Softest Cardigan You’ll Ever Own
77.9% of Users Sustained Weight Loss Over 9 Months Using This Program
END_OF_DOCUMENT_TOKEN_TO_BE_REPLACED