Jessica Simpson 'Felt Like a Call Girl' Amid Secret Affair With Movie Star
John Legend: How My Kids With Chrissy Teigen Adjusted to New Baby
You Love Dolly Parton’s Music, but Have You Read Her Books?
END_OF_DOCUMENT_TOKEN_TO_BE_REPLACED

Pink was in the mood to gush. It was the 11th anniversary of her and husband Carey Hart’s Costa Rican beach vows, and to mark the moment, she dreamed up a sweet dedication to her “care bear.” Sharing a photo of them kissing with her 1.8 million Instagram followers, she captioned the January 7 post with a series of emojis and a touching message. “I’m very luck to be able to say that you’re mine,” she wrote to the retired BMX biker. “Thanks for sticking around.”

That perseverance has kept their union alive. To maintain the 16-year romance, the motocross athlete, 41, and the three-time Grammy winner, 37, “take breaks,” she admitted on The Ellen DeGeneres Show last year. 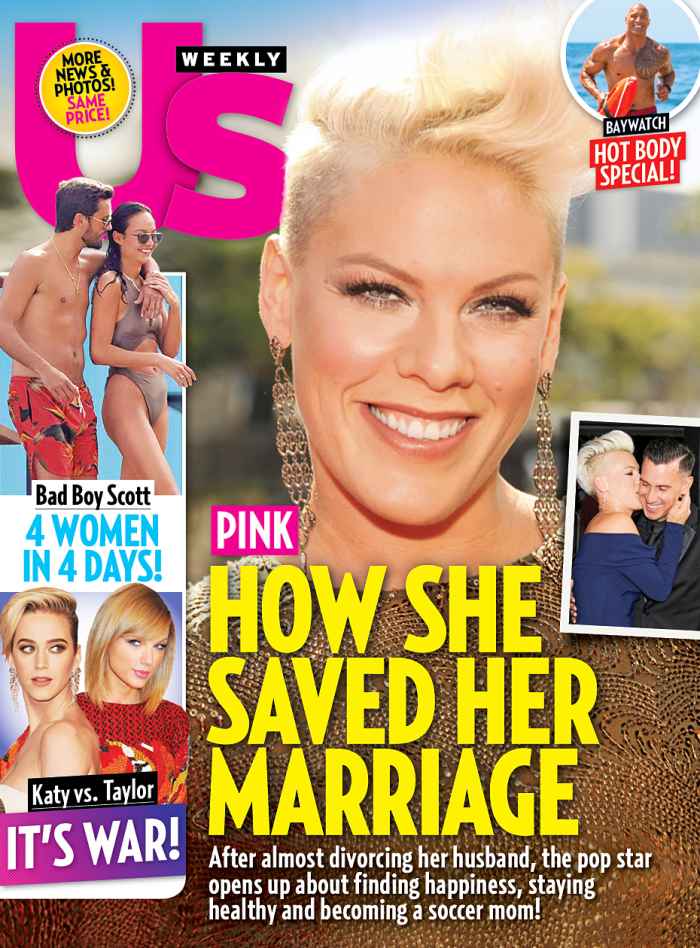 Two of them, to be exact. The couple broke up in 2003 while dating, and then split again in 2008, even going so far as to draw up divorce papers. “We’ve had two breaks,” Pink (born: Alecia Moore) explained. “The first one was about a year. And the second one was 11 months.”

Their strategy may be unorthodox but it works. Nearly a decade after their second reconciliation, the motorcycle-loving, tattooed pair are a tight-knit unit, complete with daughter Willow, 6, and son Jameson, 5 months. “They’ve been through a lot, but they are solid now,” an insider reveals in the new issue of Us Weekly. “They love their life together.”

Pink, a high school dropout and former drug user, today revels in a quiet life of preschool drop-offs and making Rice Krispies treats for bake sales. “I honestly can’t believe how responsible I am,” she told Us during a phone interview May 10 — eight days before she and Hart biked 100 miles to raise money for nonprofit No Kid Hungry as part of the Chefs Cycle event. “All of a sudden I’m a soccer mom and doing the damn thing. No one would have guessed this for me. Honestly, I didn’t realize that you could enjoy it so much.”

These days, the singer gets her kicks on the ball field. While watching Willow play T-ball in early may, “I was screaming my head off,” she admitted to Us. “I made my baby cry!”

Soon, she looks forward to making her kids cringe: “Embarrassing them is the fun part!” It shouldn’t be hard considering kindergartner Willow is already unimpressed with her hit records. “The other day, I picked up her friend, who started singing, ‘Raise Your Glass,’” she recalled. “My daughter rolled her eyes and said, ‘That’s not even one of the good ones!’”

For more on Pink’s new life — and her favorite activities with her two kids — pick up the new issue of Us Weekly, on stands now!

Jessica Simpson 'Felt Like a Call Girl' Amid Secret Affair With Movie Star
John Legend: How My Kids With Chrissy Teigen Adjusted to New Baby
You Love Dolly Parton’s Music, but Have You Read Her Books?
END_OF_DOCUMENT_TOKEN_TO_BE_REPLACED