This One-Piece Swimsuit Is So Flattering, You’ll Never Want to Take it Off
This Family-Friendly Virtual Pet Game Will Be The Next Hit Of Your Household!
This Affordable Kaftan From Amazon Is Giving Us Serious Zara Vibes
END_OF_DOCUMENT_TOKEN_TO_BE_REPLACED

Not the most royal request. Virginia Roberts, the Florida woman who alleges she was forced to have underage sexual relations with the Duke of York when she was 17, is coming at the royal once more.

Roberts, who was unidentified in her original lawsuit, made accusations against Prince Andrew in her lawsuit against Andrew’s friend, billionaire banker Jeffrey Epstein, whom she alleges told her “to give the prince whatever he demanded” and to “report back on the details.” Following the accusations, Buckingham Palace denied the allegations.

In new documents obtained by Us Weekly, Roberts, identified as Jane Doe No. 3, is now requesting the royal, now 54, speak under oath.

“This letter is a formal request on behalf of Mr. Edwards and Professor Cassell to interview you, under oath, regarding interactions that you had with Jane Doe No. 3 beginning in approximately early 2001. Jane Doe No. 3 was then 17 years old,” the letter, which was delivered to the Palace, reads. “Among other things, I would like to discuss events that occurred at the time that the photograph below was taken — and shortly thereafter.” In the photograph, a younger Prince Andrew poses with a young Roberts. 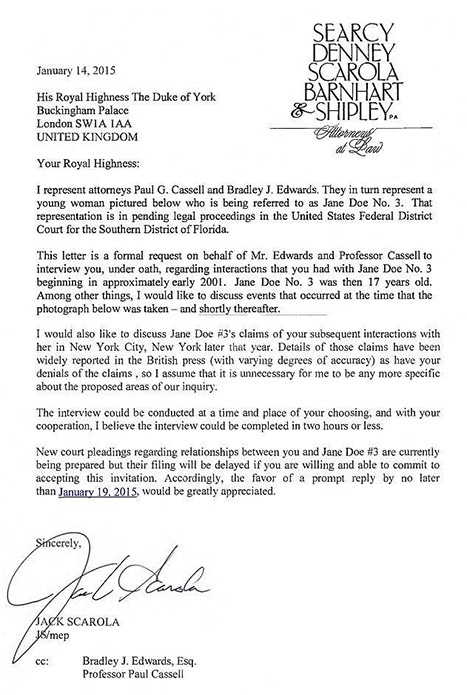 Following the Palace’s statement, Roberts released a 14-page statement which, according to the Mirror, read: “I have directed my attorneys, Bradley J. Edwards and Paul G. Cassell, to purse all reasonable and legitimate means to have criminal charges brought against these powerful people for crimes they have committed against me and other girls…I am telling the truth and will not let these attacks prevent me from exposing the truth…I was trafficked for sex to many powerful people. These powerful people seem to think that they don’t have to follow the same rules as everyone else. That is wrong.”

Epstein previously served 13 months in prison for having sex with a 14-year-old in 2008 and is now a registered sex offender.

Prince Andrew, who is fifth in line to the throne, is dad to Princesses Beatrice, 26, and Eugenie, 24, with ex-wife Sarah Ferguson.

During an interview with Matt Lauer on the Today show, Duchess of York Ferguson refused to comment on the claims but did back her ex-husband, crediting him for being her best friend and an amazing dad to their daughters.

This One-Piece Swimsuit Is So Flattering, You’ll Never Want to Take it Off
This Family-Friendly Virtual Pet Game Will Be The Next Hit Of Your Household!
This Affordable Kaftan From Amazon Is Giving Us Serious Zara Vibes
END_OF_DOCUMENT_TOKEN_TO_BE_REPLACED
Close widget