That’s one way to make an impression! A Ryan Gosling look-alike from Phoenix, Arizona, asked La La Land actress Emma Stone to prom in an epic video that he posted to Twitter on Tuesday, April 4.

The would-be leading man, high schooler Jacob Staudenmaier, recreated the opening sequence from the Oscar-winning 2016 movie-musical, complete with cars stuck in gridlock (in this case, the cars appeared to be arranged in the school parking lot, as opposed to one of Los Angeles’ winding highways).

The Arcadia High School student and his peers sang along to the tune of “Another Day of Sun,” swapping out the original lyrics for more creative ones asking Stone, 28, to the school dance. 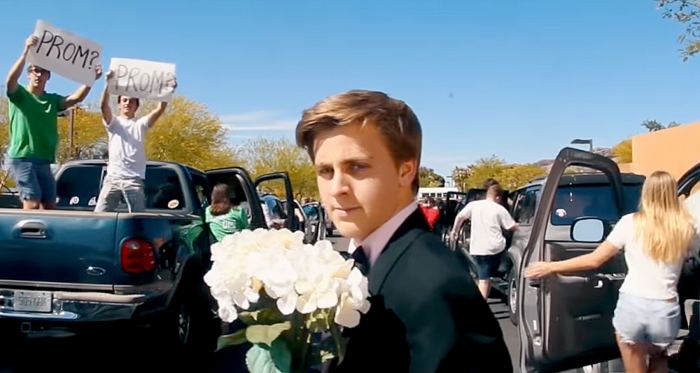 “I need a date to prom / I should have done it earlier / But now I’ll sing this song / I think I’m kind of freaking out / This song took so much time / And I’m finding this real hard to rhyme / It’s fine, I’m fine,” he began the epic two-minute choreographed performance.

“Jacob Staudenmaier is my name / Emma Stone if you came / I think I’d lose it, Go insane / We’ll have to see,” he continued. “I hope you’ll want to come on down / I’ll see your face and think of how/ I got so lucky.”

In the clip, Staudenmaier and his pals mimicked La La Land’s chipper opening number, with a few tongue-in-cheek signs thrown in for good measure. (When he mentioned going out to dinner, for instance, a friend held up a sign that read “Olive Garden?”.)

“People say I look like Ryan Gosling / And maybe that’s a bit far fetched / Please don’t let me down / It’d be in your hometown / The coolest guy around the valley of the sun,” he finished the epic ask. (Stone is originally from Phoenix, Arizona.)

At the end of the clip, the young Lothario presented the camera with a bouquet of white flowers as his friends held up about a dozen signs reading “Prom?” behind him. No response yet from Stone.

Watch the cute clip above, and check out the crew’s dance moves!