Maksim Chmerkovskiy knows from experience that you can always go home again. “I may turn off a bigger percentage of people than I keep around,” the 14-time Dancing With the Stars pro, 36, tells Us Weekly. “But over a period of, let’s say, 10 years, people all come back in some way, saying, ‘Hey, we haven’t spoken in a decade, but I understand where you’re coming from, and I want us to continue being friends.’ I have a 100 percent return rate.”

PHOTOS: Dancing With the Stars Winners Through the Years: Mirrorball Champs From 2005 to Now

The ballroom dancer, who took a four-season break from the ABC hit, made just one phone call to land a spot on season 23 (premiering Monday, September 12, at 8 p.m. ET) and a partner in model Amber Rose. Along for the ride: 18-time pro Cheryl Burke, absent three seasons and pairing with controversial Olympian Ryan Lochte, and 16-season competitor Derek Hough, who took one hiatus and will dance with actress Marilu Henner. Mid-rehearsal in L.A., the three got candid with Us for the September 12 issue.

Read on for what the dance pros said about dating their show partners, having their bodies scrutinized by viewers and enduring friction with costars. 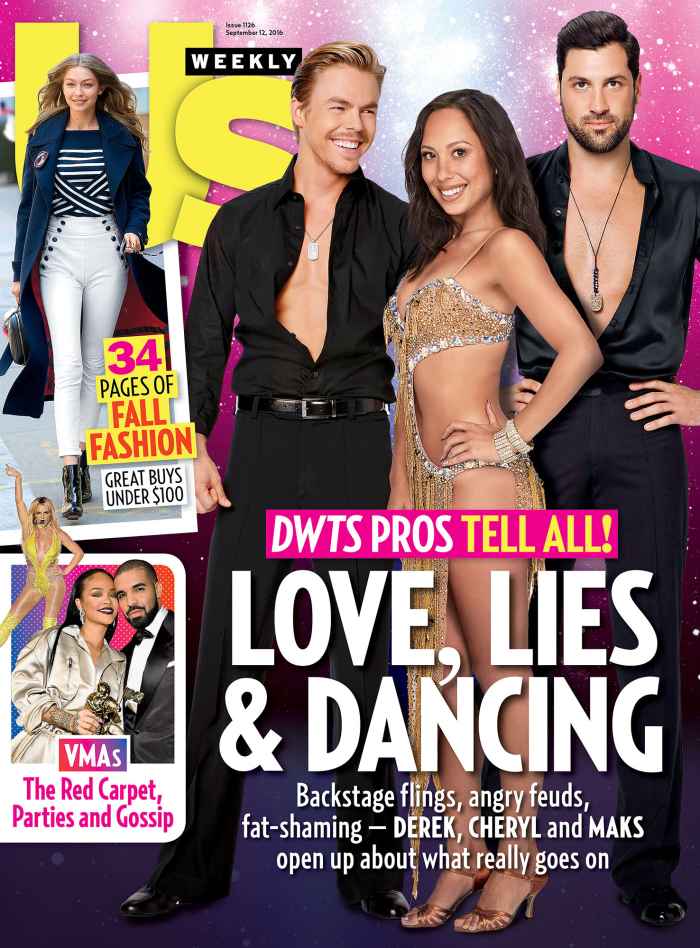 Us: So, why return to the show?

Maksim Chmerkovskiy: I was on tour with my brother Val [also a DWTS pro, partnering with Olympian Laurie Hernandez] this summer. I finished, dillydallied for a while, and I was like, “I want to move a little! So, short of taking f–king salsa lessons, I might as well go do Dancing With the Stars!” My tenure on DWTS was constantly tumultuous. There was always negativity. But this tour was a very cathartic experience. It focused on life through dance, how we got here. Things that bothered me before no longer did.

Cheryl Burke: The last time on the show, with Antonio Sabato Jr., I remember feeling really worn-out and not wanting to be there. I went to Japan and did a show called Love the Floor, and it brought back my love for dancing. I didn’t realize how much I affected people — and myself — through dancing. This is what I love to do.

Derek Hough: My plan was to do Singin’ in the Rain on Broadway this fall, but there were no theaters available. I love Dancing With the Stars, and if I’m available, I want to do it.

Us: Will a Maks-Derek rivalry reignite?

Us: In interviews in 2011, you accused the show of favoring Derek!

MC: I just literally said everything that everybody else thinks. Listen, I don’t have a problem with Derek. The producers have changed, and it’s different now.

DH: It was frustrating [being accused of favoritism], because it discounted my work and how much I put into teaching and choreography. I’ve been very fortunate with partners. But it’s not rigged. Production has said to me, honestly: “People are complaining, so we’re going to give you this partner, because it seems more difficult.” Then I ended up winning. Whatever somebody says about me, that’s a reflection on how they feel and how they are. I just say, Look, I’m putting in the work. I don’t need extra drama.

CB: People are like, “Derek has six Mirrorball Trophies!” But Derek is talented. When I won my first two seasons, people thought it was being rigged.

Us: Maks, will you keep speaking up?

MC: I’m the person who will say something and just move on. It’s like the Trump effect. This guy says some s–t, and then everybody is like, “Oh, my God, what did he say?” And he just goes on with his life. But I’ve benefited tremendously from speaking my mind. I’ve also turned off a lot of people. I have a new understanding that there is more than one way of getting things done. We’ll see if I can exercise that. If not, I’ll go back to saying crazy s–t. [Laughs.]

Us: Cheryl, you were bullied for your weight in 2008. Has that stuck with you?

CB: I definitely felt sick to my stomach. It’s not a great feeling when you have to be half naked wearing those little costumes either. I am very curvy, I have hips, I’ve got a waist. If anything, I was displaying a healthy body image. But do I feel confident in my own skin now? Yes, absolutely.

Us: The pro-partner relationship is intense, almost like you’re a real couple. Tell Us about that.

CB: Well, we do dry-hump each other for what seems like 24/7 for a few months! For the pro dancers, we’re used to this. The celebrities who come in here are vulnerable. And we develop a real bond.

DH: Everyone’s excited and it just happens. But it’s not a sexual thing. It’s a closeness, a security, a trust. All the things you want in a relationship! I always joke that I’ve been married and divorced 18 times. You get so wrapped up in your partner, and then the show’s over. You’re like, “My heart’s broken!”

PHOTOS: Most Disastrous 'Dancing With the Stars' Partners Ever!

Us: Cheryl, you admitted to a fling with Chad Ochocinco in 2010, and Derek, you dated Shannon Elizabeth in 2008. Any regrets?

CB: With Chad, I think I wanted it to be serious, but I couldn’t handle it. He did some dating show [VH1’s Ochocinco: The Ultimate Catch]. I started to realize this wasn’t the person for me. But I kept the diamond necklace he gave me for my birthday!

DH: I was 22 and everything was so new. Now I keep my personal life to myself.

Us: Maks, did you intentionally lead fans to believe you and Meryl Davis were an item back in 2014?

MC: We never were together. It got to the point where we didn’t even know how to continue saying, “No, we’re not dating.” The funny thing is, I’m engaged [to DWTS pro Peta Murgatroyd, 30], I have a baby coming, and there are still people who think Maks and Meryl can be a thing!

Us: The pros have generated romances too. Maks, you’ve been with Karina Smirnoff and Peta.

MC: It’s a very incestuous group. It’s not awkward at all. I’m a very easy person when it comes to not giving f–ks. I don’t know how to put it any other way. I got Peta, so why would it be awkward?

Us: Cheryl, you called your 2007 partner Ian Ziering the “worst” because of his attitude. Wish you could take that back?

CB: No. I don’t know if he’ll ever speak to me again. But I was just joking. I’m very sarcastic. Sometimes my mouth gets me in trouble and I should just stick to dancing!

Us: Maks, what happened to your friendship with 2011 partner Kirstie Alley?

MC: Scientology happened. You can thank [my friendship with 2013 contestant and former Scientologist] Leah Remini for that. A note was sent to a friend telling me I was “disconnected,” as in, I am no longer allowed to be Kirstie’s friend. I find it ridiculous for an adult human being to “disconnect” from someone. But everyone is entitled to their own insanity.

Us: What about Hope Solo, who accused you in 2011 of hitting her?

MC: That lie generated so much publicity, my grandmother was getting death threats! And nobody had my back, nobody helped with the situation. I felt betrayed.

Us: Any other nightmare partners?

CB: I had one who said, “I’ll never shimmy! I’ll feel too feminine.” Come on, enjoy the process! We’re not curing cancer here. He made it a big deal and this led to a fight, which we then had to retake on camera, like, “Can you walk out the door and slam it again?” The beauty of reality shows!

DH: One partner had a meltdown in rehearsal that was so bad, I went over to the camera, ejected the tape and broke it. I got in serious trouble with producers. They said, “You cannot interfere,” but there was no way I was going to let a human being come off like that.

Us: Which partners surprised you the most with their talent?

CB: Rob Kardashian [in 2011] and Jack Osbourne [in 2013]. They showed me it’s all about personality on the show and the chemistry you have with your partner. I don’t care who you are: If you come in with a bad attitude and you’re stuck up and can’t take direction from women? I won’t be able to do my job.

DH: My first season [2007], I slipped on Jennie Garth’s dress and I dropped her.

CB: My mic pack slipped out and I felt flapping. I thought it was my boob.

MC: We’re professionals! And, you know, that’s why you wear black underwear.