Duchess Kate Reportedly Uses This Natural Alternative to Botox — 31% Off!
Jennifer Aniston’s Facialist Compared This Mascara to Having Lash Extensions
Grab One of the Best Deals on Apple AirPods in Years — 50% Off!
END_OF_DOCUMENT_TOKEN_TO_BE_REPLACED

In the July 16 episode of Pretty Little Liars, an unidentified person trashed Connor’s car outside of the local coffee shop in Rosewood. The timing was suspicious, given that he had lied to the entire school about hooking up with Aria (Lucy Hale) earlier that afternoon. In a sneak peek from the July 23 episode of the ABC Family hit, Aria asks her brother Mike (Cody Christian) if sought retribution against Connor (Michael Grant) on her behalf.

PHOTOS: A guide to the Pretty Little Liars characters

“Part of me would’ve gladly taken a whack at that piñata,” Aria says after seeing that Connor’s car is still dented and windowless.

“Whoever did it knows Connor’s a wuss. . . Things get aggressive, he backs down every time,” Mike says.

Realizing that her brother never made it to the open mic night at the coffee shop, Aria asks Mike why he bailed. “Sad chicks in hipster glasses playing the same three chords and whining about their ex? Yeah, no thanks,” he explains. 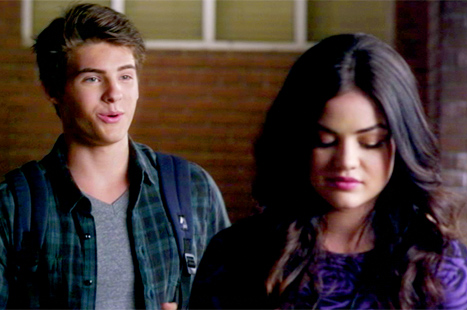 “Hello! I play lacrosse,” Mike protests. “It’s a tiny little stick. The car was smashed by a bat, a lead pipe — maybe even a sledgehammer.”

To see if Aria believes Mike, watch the clip above now. Tune in for an all-new episode of Pretty Little Liars on Tuesday, July 23, at 8 p.m. EST on ABC Family.

Duchess Kate Reportedly Uses This Natural Alternative to Botox — 31% Off!
Jennifer Aniston’s Facialist Compared This Mascara to Having Lash Extensions
Grab One of the Best Deals on Apple AirPods in Years — 50% Off!
END_OF_DOCUMENT_TOKEN_TO_BE_REPLACED