SAG Awards 2020: 5 Nominees to Watch
Everything to Know About the SAG Awards 2020: Nominees, Presenters, How to Watch and More
Jillian Michaels Refuses To Apologize After Fans Accuse Her Of Fat-Shaming Lizzo
END_OF_DOCUMENT_TOKEN_TO_BE_REPLACED

It’s about time to start sippin’ on gin and juice, because Snoop Dogg has a cookbook coming out! The rapper first debuted the track “Gin & Juice” in 1994, and now he’s preparing for a new type of release that also involves his favorite libation.

Celebrities in the Kitchen

In a tweet shared on Wednesday, August 22, Snoop revealed that his first cookbook, From Crook to Cook, will be released this fall. “Platinum recipes from the boss doggs kitchen the first ever snoop cook book comin soon to @ChronicleBooks,” the Grammy nominee, 46, wrote.

According to Amazon, the book’s official release date is Tuesday, October 23, and it sounds like readers can expect quite a bit from the television personality whose unlikely friendship with Martha Stewart serves as the basis for the duo’s weekly cooking competition show on VH1 called Martha & Snoop’s Potluck Dinner Party. 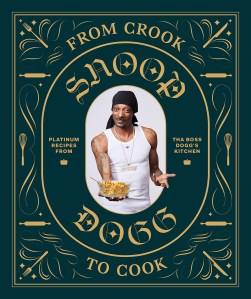 And even though all 50 of Snoop’s recipes are cannabis-free, the singer still hopes to give readers a “taste of the high life with remixes on upper echelon fare such as lobster thermidor and filet mignon.”

Snoop’s first cookbook will also include some of his “favorite munchies” such as chewy Starbursts and Frito BBQ twists. And lastly, as the description states, “No party is complete without that gin and juice and other platinum ways to entertain.”

6 Watermelon-Based Cocktails to Try This Summer

Additionally, readers can expect to find “epic stories and behind-the-scenes photos that brings this masterpiece to life.”

Tell Us: Will you be buying Snoop Dogg’s cookbook?

SAG Awards 2020: 5 Nominees to Watch
Everything to Know About the SAG Awards 2020: Nominees, Presenters, How to Watch and More
Jillian Michaels Refuses To Apologize After Fans Accuse Her Of Fat-Shaming Lizzo
END_OF_DOCUMENT_TOKEN_TO_BE_REPLACED