Sarah Michelle Gellar Admits Her and Freddie Prinze Jr.’s Parenting ‘Expectations Are a Little Higher Than Most’
Shoppers Say This Is the Softest Cardigan You’ll Ever Own
La Adelita Tequila: The Hottest New Drink in Aspen
END_OF_DOCUMENT_TOKEN_TO_BE_REPLACED

So what exactly does it take to achieve that royal glow? According to Harper’s Bazaar UK, bride-to-be Meghan Markle has heeded the skincare advice of her soon-to-be sister-in-law Kate Middleton and started using an $89 gel-cream called Biotulin that claims to be “Botox in a bottle.” And while it’s not known for sure if she’s using the alleged wonder cream, the rumor may have you wondering what exactly the potion is, what it does for the skin and how much it costs. Well, we have the answers.

According to its website, Biotulin Supreme Skin Gel is an over-the-counter serum that can make users look younger “in just 60 minutes.” While the fast-acting results may sound too good to be true, the brand claims that Spilanthol, one of the main ingredients in Biotulin, is a local anesthetic extracted from the Acmella oleracea plant that, when applied topically to the skin, reduces muscle contractions à la needle injections containing Botulinum Toxin (a.k.a. Botox).

By reducing muscle contractions, the gel-cream is said to be able to soften the appearance of fine lines. Additionally, Biotulin contains a second plant extract from South America known as blady grass that is able to survive desert-like conditions. In this formulation, it reportedly keeps skin moisturized for up to four hours, while a hyaluronic acid-like ingredient also helps with hydration. In theory, the added moisture should keep skin plumped, which would, in turn, combat the look of wrinkles. 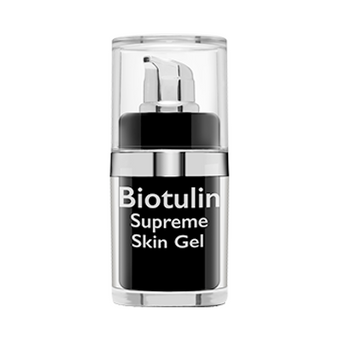 The product is meant to be massaged into the face and neck after cleansing, and the brand said the gel should be used “several times a day” for best results. In both lab and human testing, users reported smoother and tighter looking skin in one hour and a reduction in the “depth and length of wrinkles” after 30 days of use.

Kensington Palace has not commented on reports linking Markle to Biotulin, but rumors have swirled for years that Kate Middleton is a fan. The speculation picked up steam when makeup artist Carl Ray told Celebrities Style magazine that former First Lady Michelle Obama started using the supposed Botox-alternative at the recommendation of the Duchess of Cambridge. The product’s website also lists Queen Letizia of Spain, Kim Kardashian and Madonna as devotees.

Considering royals and celebrities always need to look camera ready, it isn’t far fetched to think they would try anything that keeps skin youthful and glowing without a trip to the dermatologist. It is hard to believe, however, that a topical product can produce the same level of results as an injectable one. So until Markle or Middleton go on the record about their usage, we’re going to take these rumors with a grain of salt.

Sarah Michelle Gellar Admits Her and Freddie Prinze Jr.’s Parenting ‘Expectations Are a Little Higher Than Most’
Shoppers Say This Is the Softest Cardigan You’ll Ever Own
La Adelita Tequila: The Hottest New Drink in Aspen
END_OF_DOCUMENT_TOKEN_TO_BE_REPLACED