“Okay, let’s see what’s in this treasure bag of goodies!”

That’s how Nicole Scherzinger, who will soon be performing at the 2015 Special Olympics, began our chat about just what she carries in her ultra-sleek, black travel bag.

First up out of the powerhouse vocalist’s Aspinal of London “Medium Marylebone Tote” was a leather wallet, which held her Nobu Black Card (“That’s kinda gangster, right?” she admitted) and her membership card for the Upright Citizens Brigade, where she studied improv comedy. 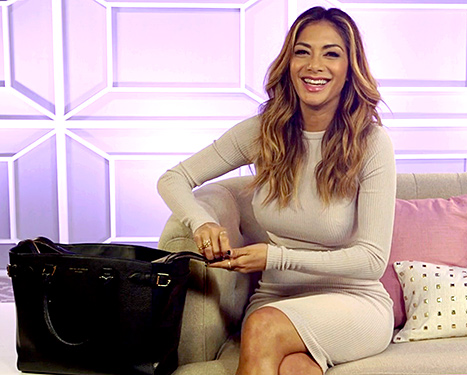 Scherzinger, 37, then whipped out her top-handle jewelry case, which included bedazzled heirloom jewels gifted to her by her family and designed in her native Hawaii. The I Can Do That judge also shared a bronze charm necklace from The Giving Keys, a charity organization that helps the homeless.

The ex-Pussycat Doll explained, “This badass, awesome chick started this line, and wanted to employ homeless people and just give back. So she just took keys and recycled them and wrote really inspirational sayings on them. Basically you just wear these until you find someone who really needs the key, and then you give it to them.”

For more on Scherzinger’s go-to sunglasses, favorite summer moisturizer, and more, watch the video above!