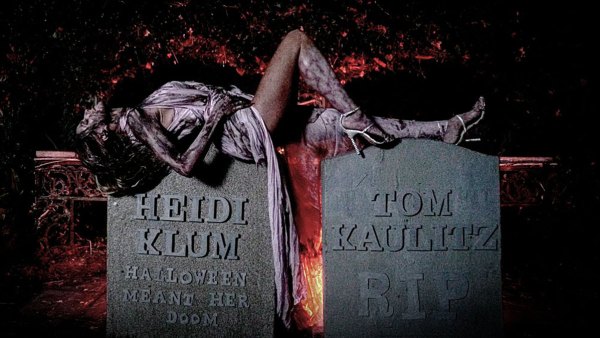 Pets
Best Celebrity Pet Halloween Costumes of All Time
A howling good time! Celebrities are just like Us — they love to dress up their furry friends for Halloween. Miley Cyrus, for one, is a known pet lover and cannot resist adopting when she feels an animal is the right fit for her. She added to her family in February 2021 after the death […]

Halloween
Chrissy and John's Daughter Luna: All Her Halloween Costumes
Chrissy Teigen and John Legend had the best time ever dressing up their 6-month-old daughter, Luna, for her first Halloween — see all of the tot’s adorable costumes

Halloween
'Ted Lasso'! 'Bridgerton'! Kelly and Ryan Take on TV for Live’s Halloween
Another year, another over-the-top Halloween show! The team behind Live With Kelly and Ryan pulled off 40 different costumes for their Friday, October 29, show. “This is our audience’s favorite show of the year,” Kelly Ripa told Eyewitness News at the taping of Friday’s show. Ryan Seacrest added, “It is incredible to see audience members’ […]

Halloween
Yikes! See the Worst Celebrity Halloween Costumes Through the Years
Just plain scary! Katy Perry, Bethenny Frankel, Hilary Duff and more celebrities have fallen victim to bad costumes over the years, proving that even stars can miss the mark when it comes to Halloween. Whether it’s wearing an offensive outfit or a creepy get-up, sometimes celebrities are better off playing it safe rather than trying […]

Halloween
The Best Halloween Costumes Worn by TV Characters
Getting into the spirit -- off and on-screen! Check out how characters from some of your favorite shows have dressed up for Halloween over the years, including the cast from The Office, Modern Family, New Girl, and Pretty Little Liars.

Halloween
Most Controversial Celebrity Halloween Costumes Over the Years: Pics
Just a bunch of hocus pocus? When it comes to celebrity Halloween costumes, not every idea is a winner — and some outfits result in major backlash from fans. Julianne Hough received mixed reviews when she dressed up as Uzo Aduba’s Orange Is the New Black character, Crazy Eyes, in 2013. In addition to the […]

Photos
Happy Fall! Stars at Pumpkin Patches Over the Years
Check out photos of Jessica Alba, Jennifer Garner, Olivier Martinez and other celebs who are getting into the Halloween spirit by visiting a pumpkin patch

Love Lives
Kourtney and Travis Dress as Sid and Nancy for Halloween After Engagement
Spooky season in full effect! Kourtney Kardashian and Travis Barker got in the Halloween spirit a few days early, dressing up as punk icons Sid Vicious and Nancy Spungen. The Keeping Up With the Kardashians alum, 42, shared photos of the duo’s look via Instagram on Friday, October 23, just days after the couple got […]

Movies
Celebs' Horror Movie Pasts
They may be A-List stars now, but these celebs got their start in some spooky (and occasionally cheesy) horror flicks. Click through the gallery to see who braved the scary genre for the sake of their careers.

Food
Halloween Eats! Kristen Bell, Chrissy Teigen, More Share Favorite Candies
Trick or treat -- give Us something sweet to eat! Whether these celebs are handing out (or devouring!) these delicious Halloween treats, stars like Kerry Washington, Chrissy Teigen, and Katie Holmes tell Us Weekly what candies they prefer.

Movies
Would Vinessa Shaw Be Down to Reprise Her 'Hocus Pocus' Role in Sequel?
Another glorious morning! Twenty-eight years after Hocus Pocus was released, star Vinessa Shaw has fondly looked back at her childhood role in the film and even speculated potential sequel ideas. “I haven’t heard anything,” the Blazing World actress, 45, told Entertainment Tonight on Friday, October 15, of the upcoming Hocus Pocus 2 sequel. “I know, it’s so disappointing [to hear]. I would love […]

Exclusive
Kyle Richards Compares ‘RHOBH’ Reunion to 'Halloween' Villain Michael Myers
Fright night! Kyle Richards would rather try and outrun Halloween Kills’ villain Michael Myers than be stuck in a room with some of her Real Housewives of Beverly Hills costars. “The [RHOBH] reunion is terrifying in a different way,” the 52-year-old star exclusively told Us Weekly earlier this month when comparing the horror film to […]

Kardashians
Eek, So Chic! Kourtney Kardashian and Kylie Jenner Share Halloween Décor
It’s officially spooky season! Kylie Jenner and Kourtney Kardashian both showed off their fall decor as October kicked off. Kardashian, 42, is big on skeletons for Halloween this year, as she showed off the massive outdoor skeletons greeting all of her visitors. TikTok has made Home Depot’s 12-foot skeletons very trendy and the Poosh founder managed […]

Movies
Creepy and Kooky! ‘The Addams Family’ Cast: Where Are They Now?
They’re crazy and kooky! While it’s been more than 30 years since The Addams Family was first released in 1991, the film has endured as one of the most popular Halloween flicks and even spawned several spinoffs and sequels. The original film brought the 1930s-era illustrations by Charles Addams to life starring several famous actors, including the […]
Previous Next