Oh, Baby! Meghan Trainor Is Pregnant, Expecting 2nd Child With Daryl Sabara
21 Zara-Style Winter Fashion Finds — All Under $40
Pedro Pascal Through the Years: From 'Game of Thrones' to 'The Last of Us'
END_OF_DOCUMENT_TOKEN_TO_BE_REPLACED

Inside the Lindo Wing at London’s St. Mary’s Hospital, a luxe maternity suite has been under lockdown since mid-March. “Security does regular sweeps of the room, then it’s resealed each time with tamper-proof tape,” an insider reveals in the new issue of Us Weekly. “It’s a high-security operation. Even the crawl space above the room is checked regularly.”

Duchess Kate Gets Sporty Before Her Last Outing Before Baby

The tony quarters in the famed maternity ward — where suites run upwards of $9,650 per day — isn’t being saved for a mere millionaire, after all. It’s where Duchess Kate, who’s expecting her newest heir with Prince William on April 23, is scheduled to give birth. And this being the third time around — Kate welcomed Prince George and Princess Charlotte in the same wing, in 2013 and 2015, respectively — the operation is well-oiled. Says the royal insider, “Everything is planned down to the tiniest detail.”

All across London and into West Berkshire, a so-called Kensington Palace “baby team” — including Kate’s mum, Carole Middleton — is on high alert. And no aspect of baby Cambridge No. 3’s welcome is being ignored. The newly formed group “is dedicated to making sure everything is ready, from media plans to security to hospital arrangements,” says the source. “There’s a backup plan for everything.”

They hope they’ll only need their first — which is scheduled down to the minute. As soon as Kate, 36, goes into labor, she and William, 35, will begin the mile-and-a-half drive from Kensington Palace to St. Mary’s. “The hospital will get only five minutes’ notice ahead of Kate’s arrival,” shares the source. The tight timeline is designed “to prevent anyone being tipped off that she’ll be leaving home,” notes the source. “And because everything is organized so precisely, the hospital can handle such short notice.” 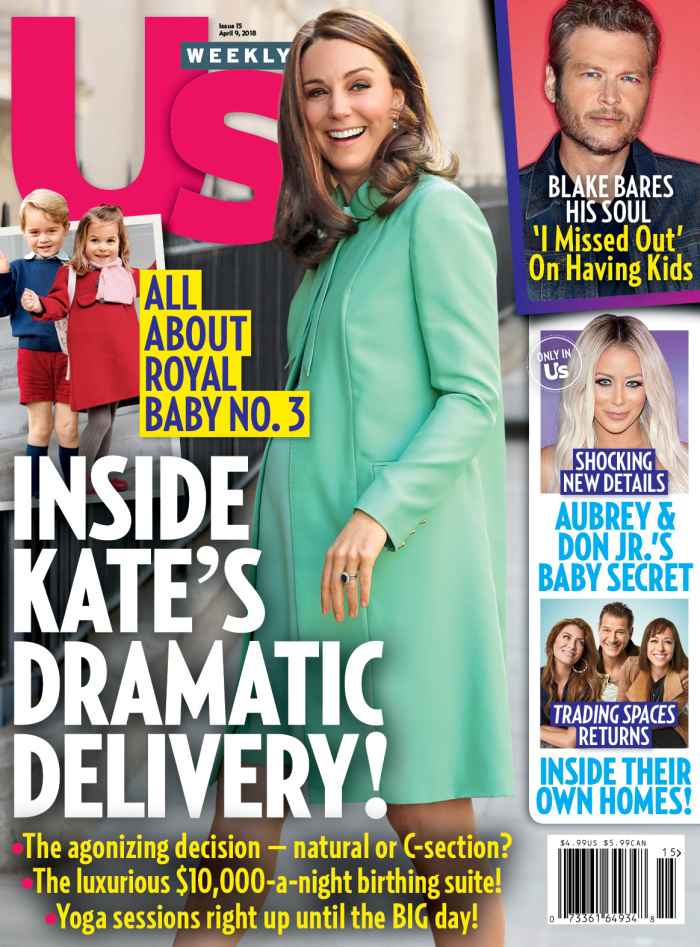 Kate’s mum, 63, will also be on her way in from her home in Bucklebury to go on grandparent duty with excited George, 4, and Charlotte, 2. “She’s visited Kensington Palace a number of times over the past few weeks,” the source says of Carole. “Alongside William, she’s been so supportive and helpful.”

Prince William and Duchess Kate's Sweetest Moments With Their Kids

And once the new royal — who will be fifth in line to the throne — arrives, the plan is to get him or her home to the family’s 22-room Apartment 1A as soon as possible. “Depending on how Kate feels,” says the source, “it’s hoped she can return home the same day or the following morning.”

For more on the littlest heir’s arrival — including when Prince Harry and Meghan Markle will first meet the babe — pick up the new issue of Us Weekly, on stands now.

Oh, Baby! Meghan Trainor Is Pregnant, Expecting 2nd Child With Daryl Sabara
21 Zara-Style Winter Fashion Finds — All Under $40
Pedro Pascal Through the Years: From 'Game of Thrones' to 'The Last of Us'
END_OF_DOCUMENT_TOKEN_TO_BE_REPLACED