Jessica Simpson 'Felt Like a Call Girl' Amid Secret Affair With Movie Star
John Legend: How My Kids With Chrissy Teigen Adjusted to New Baby
You Love Dolly Parton’s Music, but Have You Read Her Books?
END_OF_DOCUMENT_TOKEN_TO_BE_REPLACED

The third time wasn’t the charm. For the first 14 weeks of her pregnancy, Duchess Kate — stricken with a severe form of morning sickness called hyperemesis gravidarum — was confined to the walls of Kensington Palace. Too ill to leave, the royal missed son Prince George’s first day of school on September 7 and all planned public appearances since August 30.

“It was a difficult start to the pregnancy,” an insider reveals of the mom of two in the new issue of Us Weekly. But on October 10, Kate attended a World Mental Health Day event. And six days later, she didn’t just get out of bed, she transformed into a dancing queen — accepting Paddington Bear’s request to take a twirl on the platform of his namesake station.

“She is feeling significantly better,” the source says of Kate, who made a surprise stop at the event to meet children connected with the charities she, husband Prince William and brother-in-law Prince Harry support. “Especially when you compare to how bad she was at the start. It was a worrying time for everyone.”

Now the mood is full-on celebration. Four-year-old George and little sister Princess Charlotte, 2, “know that Mummy is carrying another brother or sister for them and they’re very excited,” says a Middleton family insider. Which means 35-year-old Kate and her prince spend most of their days answering questions, says the family insider, “about the size of the baby and whether it’s a boy or a girl.” 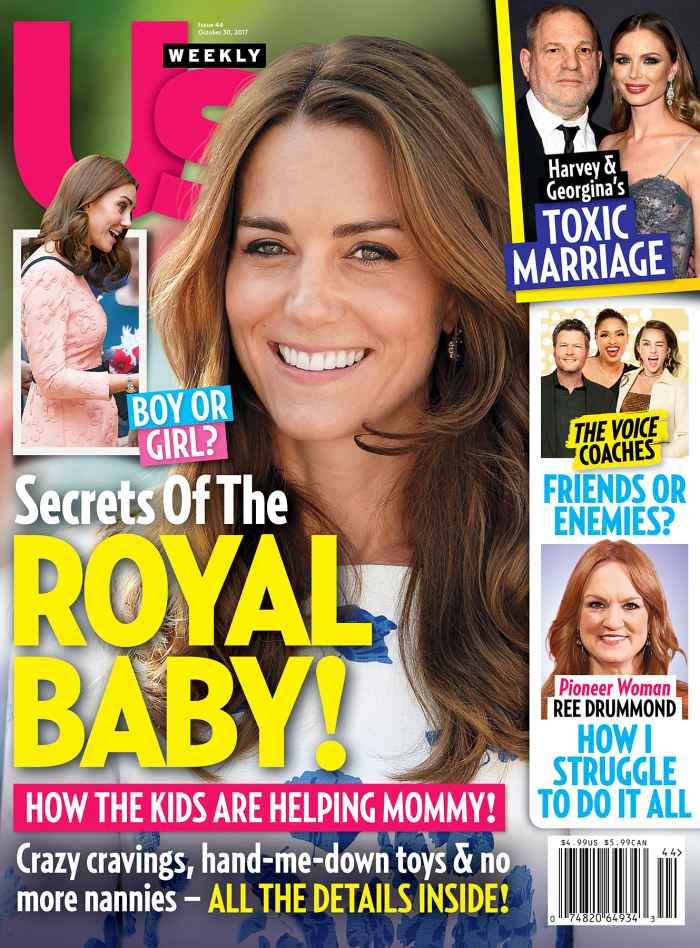 The couple don’t have a response for the latter — “They’re going to leave it to surprise this time,” says the insider — but they are working out other details ahead of the tiny heir’s expected April arrival. The royal’s OB-GYN, 54-year-old Alan Farthing, who delivered both George and Charlotte, has been tapped to handle the birth, says a source: “He’s postponed his retirement to do it.” And a suite in the ultra-exclusive Lindo Wing of London’s St. Mary’s Hospital has been reserved.

Other than that, says a source close to William, 34, and Kate, “They’re taking each day as it comes. After you’ve had two children, the third usually feels like somewhat of a breeze so they’re just focused on Kate and the baby’s health right now. Everything else can wait.”

On the horizon: turning one of the 22 rooms in Kensington Palace’s Apartment 1A into a nursery. While the duo are likely to be showered with presents for Baby Cambridge, a Kate source says the room “will be filled with hand-me-down clothes and George and Charlottes old toys, of course!”

The new baby also won’t receive their own lady or gentleman-in-waiting. With nanny Maria Borrallo and a house assistant in place, Kate and William are set. Since George is in school and Charlotte is slated to start preschool in 2018, “they feel they can handle everything with the same arrangements as before,” says a source.

And though William recently joked that “there’s not much sleep going on at the moment,” with two kids at home, the pair “don’t have any plans to hire a night nurse,” says the source. There’s simply no need. “At this point, they are extremely capable and confident in their parenting abilities and baby know-how,” says the source. “They’re absolute pros.”

For more on Kate’s pregnancy — and how George is helping out — pick up the new issue of Us Weekly, on stands now!

Jessica Simpson 'Felt Like a Call Girl' Amid Secret Affair With Movie Star
John Legend: How My Kids With Chrissy Teigen Adjusted to New Baby
You Love Dolly Parton’s Music, but Have You Read Her Books?
END_OF_DOCUMENT_TOKEN_TO_BE_REPLACED