Boost of confidence! Kylie Jenner has been working hard to shed her pregnancy weight and beau Travis Scott is supporting her every step of the way.

“She looks and feels great!” a source reveals in the new issue of Us Weekly. “Travis reassures her there’s no need to hide her body.”

Although the Life of Kylie star, 20, is still sporting sweatpants because “it’s just comfortable,” she’s dropped more than 20 pounds with the help of a waist trainer since welcoming daughter Stormi on February 1.

As a new mom, and in better shape than ever, Jenner has never been happier. “Stormi has brought out a much softer side to Kylie,” the insider adds. “She’s a very hands-on mom.”

The Kylie Cosmetics creator, 20, and the “Goosebumps” rapper, 25, are “in a very good place” in their relationship and enjoying parenthood, the pal adds. While the couple have no plans to tie the knot or move in together, “it wouldn’t surprise anyone if Kylie gave Stormi another sibling very soon.” 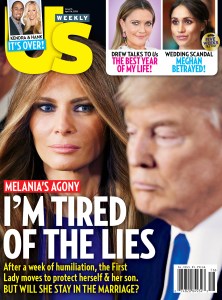 Us Weekly confirmed in September 2017 that the E! personality and Scott were expecting their first child together. Jenner stayed out of the spotlight when the news broke and only confirmed her pregnancy after giving birth. The Keeping Up With the Kardashians star now frequently shares photos with her baby girl via Instagram and Snapchat.

Jenner began dating Scott in April 2017, weeks after she called it quits with her on-again, off-again boyfriend of four years, Tyga.

For the latest TV News and interviews subscribe to our new podcast ‘Watch With Us’ below!